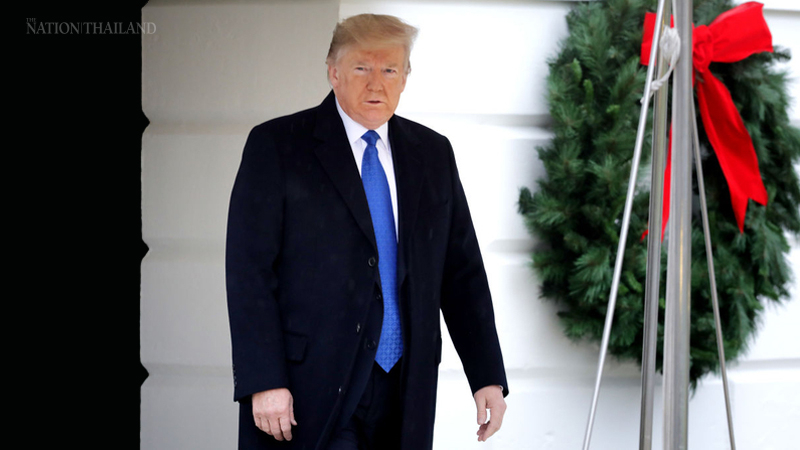 President Donald Trump risks tipping the United States - and the world - into recession if he presses ahead with tariffs on Chinese imports set to bite in just 11 days.

That's the conclusion some economists are drawing after the president renewed trade tensions with Beijing by saying he was open to waiting until after the 2020 election to reach a deal some advisers recently described as imminent.

"The economy is on the precipice and this would just push us over into the abyss. I don't think we're very far from recession as it is," Moody's Analytics chief economist Mark Zandi told The Washington Post.

Zandi sees a cascade effect ricocheting through the economy if the administration follows through on its threat to impose 15% import levies on $160 billion of Chinese goods, a list that includes laptops, cellphones, toys and other consumer goods. "It would just be too much," he said of the tariffs planned for December 15. "It would undermine investor confidence, weaken business sentiment and the negative reinforcing dynamics of a recession would take hold."

Investors are processing the renewed threat, with the Dow Jones industrial average dropping 1 percent, its third straight day of losses and the steepest one-day sell-off since early October, as the Wall Street Journal reports.

Gregory Daco, chief U.S. economist at Oxford Economics, said his firm projects the next round of tariffs would trim 0.2 percent from economic growth. "It's not huge, but it's one additional layer of drag on top of the tariffs we've already seen," he said. "I would note the possibility that the loss of confidence from the private sector would exacerbate that."

Daco says tariffs alone would be unlikely to precipitate a recession. But like Zandi he said they could ripple out dangerously if they depress business confidence, weighing on financial markets, reducing hiring and, ultimately, crimping consumer spending. "If we have an end of the year like last year," with tariffs rising, a government shutdown looming, and the Federal Reserve signaling it won't help, Daco noted, "We're starting off from a much lower point in activity now, and the risks of a recession going into 2020 are that much greater."

How seriously to take the possibility the Trump team fails to reach an agreement with its Beijing counterparts that forestalls the tariffs remains uncertain. While in London for NATO's 70th anniversary summit, Trump said "in some ways I like idea of waiting until after the election for the China deal." Still, he noted that the Chinese "want to make a deal now and we will see whether or not the deal is going to be right."

But Bloomberg News reports that despite the heated rhetoric, Washington and Beijing are moving closer to agreeing on how many tariffs already in force should be rolled back as part of a phase-one deal. And the Wall Street Journal reports the recent involvement of White House adviser Jared Kushner could indicate a deal is close-at-hand.

Stephen Myrow, managing partner at Beacon Policy Advisors, said his firm has been telling clients they believed the Dec. 15 deadline didn't necessarily mean much: As long as the two sides were continuing to negotiate in good faith, the Trump team was likely to find a way to put them off. Now, he says, "it's fluid in the sense that Dec. 15 is starting to look like a harder deadline than it was, say, 48 hours ago. But that in and of itself can change."

Commerce Secretary Wilbur Ross appeared to underscore the two sides still have difficult issues to resolve, and the U.S. feels no urgency to strike a deal. Ross told Reuters in an interview that the point Trump, in his comments at the NATO summit in London, "was trying to make is we need a proper deal, and whether it comes this December, or it's next December, or some other date is much less important than getting a proper deal."

"The important thing is to get a deal that works," he said. "Because let's face it, if we don't make a deal with China now, it's going to be a long, long time before there is a deal."

Investors perceive a pattern they hope will play out again in the coming days: Trump tends to ramp up trade confrontations when the stock market is gaining steam and back off when it tumbles. The president was dismissive of the trade-induced selloff, calling it "peanuts." And, he said, "I don't watch the stock market." The claim is belied by his own Twitter feed:

"There's this binary moment in the market where people are freaking out, and there's also a group that says, 'He's focused on reelection, and he knows how bad this would be for it, so he'll pull back,'" Myrow says. "There's a lot of post-hoc rationalization. But a lot of this comes down to what was on Fox News that morning, what did he have for breakfast, and what's going on with impeachment."