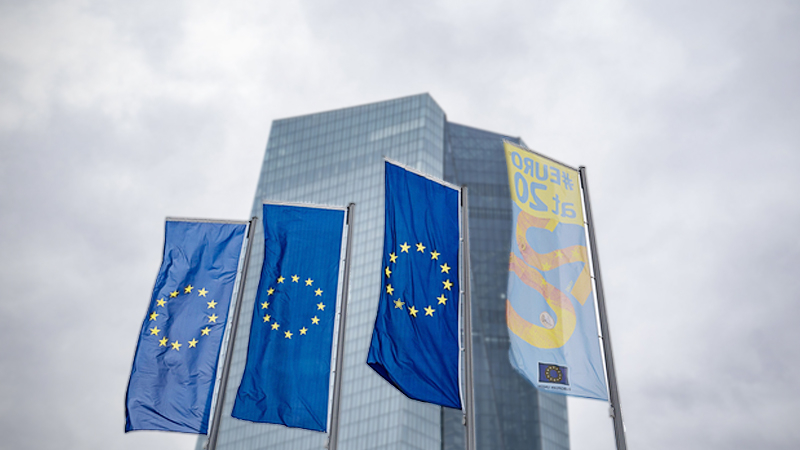 Five weeks since Mario Draghi retired from running the European Central Bank, finding an outright fan of his legacy of negative interest rates has become a lot harder.

Governing Council members, who collectively lowered the key rate to minus 0.5% shortly before Draghi's term ended, are increasingly portraying it as a necessary evil that shouldn't be compounded. Sparse communication on monetary matters by his successor as president, Christine Lagarde, hasn't dispelled that impression.

Banks have picked up on the mood change, dropping predictions that Lagarde -- under the guidance of Chief Economist Philip Lane, the intellectual standard-bearer who proposed the latest cut as part of a stimulus package -- would ease again at her first policy meeting on Dec. 12.

It's a striking development for an institution whose credibility hangs on the promise that it can always do more if needed to revive inflation, and whose policy guidance explicitly states that rates can still fall further. It suggests that a strategy review planned by the new chief will need a thoughtful scrutiny of the toolkit.

"We don't expect they'll cut rates further," said Sarah Hewin, chief economist for Americas and Europe at Standard Chartered Bank. "I'm not sure there is a consensus that negative rates are bad, but I'm wondering whether with this transition from Draghi to Lagarde -- a new broom at the helm -- there's an opportunity to vocalize their concerns."

Lane has defended negative rates as a complement to other measures that aim to spur economic activity. In one speech last month, he said they aren't "super loose" -- citing the absence of a price surge as a demonstration of that. In another, he said the policy forces banks to chase higher investment returns.

Aline Schuiling, an economist at ABN Amro Bank, reckons the weakness of the economy means the ECB will cut again, probably in March. There is "some recovery in growth, but not very spectacular," she said.

Yet the lack of a broad public defense for negative rates has let a chorus of criticism from bankers fill the void. Among them is Deutsche Bank President Karl von Rohr, who last month described them as "the biggest challenge facing the European financial industry." Even the ECB's own financial stability review flagged the risks of ultra-loose money.

Two of the ECB's prospective new board members took a similarly cautious view when quizzed by the European Parliament this week. Italy's Fabio Panetta said officials need to be alert to the "unintended consequences of monetary policy." His German colleague, Isabel Schnabel, said the institution should listen carefully to voters' concerns on sub-zero rates.

Such discontent is vocal in some euro-zone countries, notably Germany and the Netherlands. Reflecting that, ECB officials are also privately encountering pushback from some finance ministers, according to people familiar with the matter.

Bundesbank President Jens Weidmann and Dutch central bank Governor Klaas Knot, already skeptics of loose policy, look unlikely to back another rate cut unless the economy worsens significantly. So far, it seems to be stabilizing. At Draghi's final meeting in October, one participant made a plea for "patience" to allow current easing to work.

Bank of Spain Governor Pablo Hernandez de Cos said this week he couldn't rule out that sub-zero policy could eventually harm monetary-policy transmission.

Perhaps most striking is that Bank of Italy Governor Ignazio Visco, a long-time backer of monetary stimulus, has started criticizing the sub-zero policy, saying he prefers asset purchases.

"The longer they remain negative and the lower they go, the higher is the likelihood of significant negative side effects," the Italian told German newspaper Handelsblatt. "I'm not encouraging this."

One of the last banks holding out for a December rate cut, JPMorgan Chase, has thrown in the towel. Economist Greg Fuzesi said that "given the lack of any easing signal, and the time it often takes for the ECB to build consensus, it is becoming increasingly hard to see the ECB do more." Barclays said this week that "the bar for more easing is high."

The chief worry is that policy is close to the so-called reversal rate, where the harmful effects outweigh the good. Lane's denial that such a situation is near may be valid, but it's also unsurprising that the chief economist wants to dispel any impression of monetary impotence.

He and many of his colleagues, including Lagarde, do make the point that more government spending could speed up the path to normalization. Germany, the prime candidate to do that, isn't rushing to respond though, and a newly created euro-area fiscal capacity is tiny.

In short, central bankers are approaching their last meeting of the year with a heavy heart about one of their signature policy tools, even if there's no immediate way out.

Austrian Governor Robert Holzmann said in September that negative rates aren't sustainable and will need to be reversed. That's a relatively extreme view in the Governing Council -- but the open hand-wringing on the matter among his colleagues suggests he could one day have company.