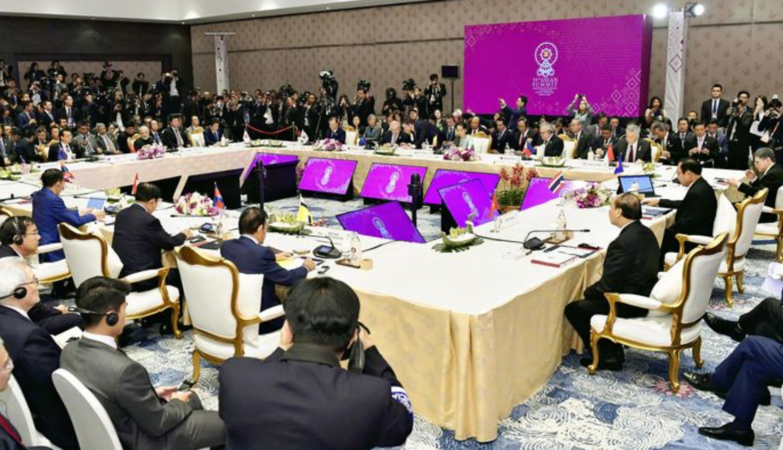 Pool photo / The Yomiuri Shimbun A meeting of RCEP leaders in Bangkok on Nov. 4, at which India announced its intention to withdraw from the regional trade deal.

The withdrawal of India from the negotiations for the Regional Comprehensive Economic Partnership free trade deal (RCEP), which has involved the participation of 16 countries, including Japan, China, South Korea and members of the Association of Southeast Asian Nations (ASEAN), is seemingly coming closer to reality.

Japan intends to continue efforts to persuade India to remain in the initial 16-country framework for the agreement of the regional trade talks. However, as there is still strong opposition to the RCEP within India, it remains to be seen whether the negotiations will go smoothly.

At a news conference after a Cabinet meeting on Friday, Economy, Trade and Industry Minister Hiroshi Kajiyama said that he would visit India from Tuesday to Wednesday.

In addition, he stated, "[Japan] will seriously discuss the matter together with India to aim for the signing [of the RCEP] within 2020," indicating that he will aim to persuade India to take concerted action with other negotiating countries.

Prime Minister Shinzo Abe also plans to visit India from Dec. 15 to 17. Abe likely will urge India to return to the negotiating table.

India's announcement of its exit from the RCEP took place at the leaders' meeting for the deal in Bangkok on Nov. 4. Initially, there was a view among the other participating countries that the withdrawal announcement was a tactic to gain a negotiating advantage for India. But since then, the Indian government has been making comments to justify the country's exit from the RCEP, strengthening its stance of not hesitating to actually withdraw.

A source close to the Thai government said, "We came to gradually feel how serious India is [about exiting the RCEP]."

In India, there is strong fear that if the RCEP is realized, a high volume of low-priced industrial and other products would flow into India from China, and India's domestic industries could suffer.

At the leaders' meeting, Indian Prime Minister Narendra Modi was said to have stated that under the current circumstances, the RCEP could put Indian companies and consumers at a disadvantage, and that Mahatma Gandhi (1869-1948) would not have allowed India to join the RCEP.

Since the day following India's withdrawal announcement, there have been a large number of voices from local newspapers and organizations in India applauding the announcement. They include one from English-language Indian paper The Economic Times, stating that the prime minister was protecting India. According to local newspapers and other sources, opposition to the RCEP still continues in India.

Japan sees the participation of India as indispensable for the RCEP because India is a huge market with a population of more than 1.3 billion people, and it is expected to see future economic growth. An increasingly urgent concern for Japan is that without India, China could enhance its relative influence.

Meanwhile, India is said to strongly seek the introduction of safeguards to prevent a sudden increase in the volume of imported products as a condition for the country to participate in the RCEP. It is said that India is taking such a step with China in mind, a stance that likely sets India apart from the other negotiating countries.

In addition, through the RCEP negotiations, India asks others to create an environment in which high-quality Indian human resources in the information technology sector will be able to succeed overseas. As the main workplaces for these Indian workers will be English-speaking countries, such as RCEP participants Australia and New Zealand, a Japanese government official said that Japan's leverage is limited.

Under such circumstances, China and some ASEAN countries began to take a stance of accepting the RCEP coming into effect with just 15 participating countries, without India.

It is said that the negotiation schedule from now on has yet to be decided. The Japanese government is concerned about the future of the negotiations, as a government official said that if nothing is done, Japan could find itself as one of the minority countries that wish to stick to the 16-country framework.

A large-scale economic cooperation framework for which negotiations started in 2013. There are 16 negotiating countries - Japan, India, the 10 ASEAN countries, China, South Korea, Australia and New Zealand. The 16 countries account for half of the global population and about 30% of global trade value.