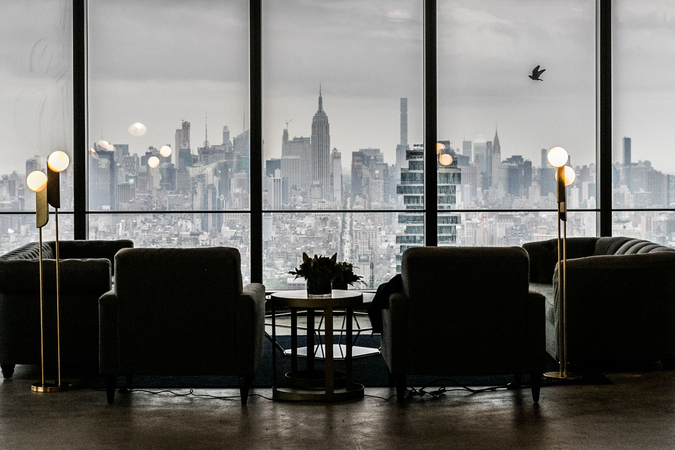 A view from 68th floor of 3 World Trade Center building in New York on May. 22, 2018. MUST CREDIT: Bloomberg photo by Jeenah Moon.

When two Irish brothers started Stripe Inc. together in 2010, there was little question about where they should put their headquarters. It had to be California.

Now, though, Stripe is leaving the metropolitan tech mecca, awash in tech talent and investor cash, and is in the process of moving its main office about 10 miles to neighboring South San Francisco. What's more, the company-whose $35 billion valuation makes it one of the world's most valuable startups-is currently building up its staff in another state altogether: New York.

In September, Stripe opened an office near Wall Street the company told Bloomberg, and plans to add several hundred employees there in the coming years. The startup's planned New York growth is on track to outpace its headquarters'.

The city has long been a hub for finance, and more recently for tech. "New York is a global leader,'' said David Singleton, Stripe's chief technology officer. "It's just an important market for entrepreneurialism and startups."

Stripe is one of many Bay Area-based fintech companies now building up a New York presence. Plaid Technologies Inc., which connects various apps to customers' bank accounts, has relocated or hired more than 100 people in the city over the last year, or about a quarter of its staff. Affirm Inc., the lending startup founded by former PayPal Holdings Inc. co-founder Max Levchin, also recently opened up a Manhattan office that has about 50 employees, the company said. And Brex Inc., the business credit card startup most recently valued at $2.6 billion, has permanently relocated its chief financial officer to Midtown, according to a person familiar with the matter who asked not to be identified discussing information that's not yet public.

In some ways, the moves are natural for tech startups with financial ambitions. Despite the growing success of fintech upstarts hailing from San Francisco, Wall Street institutions remain on top of the financial world, and New York offers an appealing pool of potential hires. Uber Technologies Inc., for example, announced the creation of a new unit called Uber Money in October, and will be shopping for fintech talent in and around Manhattan, according to a CNBC report. At Affirm, the company's New York employees' resumes are littered with names like Morgan Stanley and Goldman Sachs.

Often, financial technology companies that are just getting started set up shop in San Francisco to be close to tech workers with experience designing products at big companies, said Mark Goldberg, a partner at Index Ventures. San Francisco's resident tech giant include Uber, Lyft, Twitter and Airbnb. But "what they don't understand is the industry," he said, adding that eventually, many fintech companies look eastward for hiring. "What I think happens is that companies that start on the West Coast end up recognizing that they want to compliment that DNA with capital market expertise, and with people that have been in and around banks."

Meanwhile, tech epicenter San Francisco has become less hospitable for some companies. Last year, voters passed a new tax on businesses that will go to fund homelessness relief efforts, and taxes financial services companies at a higher rate than other types of businesses. Stripe's decision to leave the city was widely regarded by local officials as related to the passage of the new tax. The company, which strongly opposed the measure, denied that taxes were a major factor in the decision to move.

Stripe instead pointed to the limited office space in San Francisco. The city's asking prices for commercial rent, which are the highest in the nation, climbed 7% over the last year to record levels in the third quarter, according to real estate firm Cushman & Wakefield. And adding to the region's woes: In recent months fires caused widespread power outages in homes around the Bay Area.

Still, none of fintech unicorns Bloomberg spoke to have plans to move their headquarters away from the West Coast. Stripe, while hiring a few hundred people in New York, currently has more than 1,000 employees in Silicon Valley. Affirm's San Francisco office is many times larger than its Manhattan outpost. And New York-based financial services startups tend to have stubbornly lower valuations than their high-flying West Coast counterparts.

For Plaid, New York is a homecoming of sorts. The startup left the city in 2013 after winning TechCrunch's Disrupt New York Hackathon, and, seeking proximity to engineers and investors, moved its headquarters to San Francisco. "Us coming back and building a really big presence is a strong signal for NYC tech, which has made huge strides in terms of client base, talent, and funding,'' said Charley Ma, Plaid's New York City growth manager, who moved from the West Coast for the job last fall. Plaid's chief executive officer, however, will remain in San Francisco.