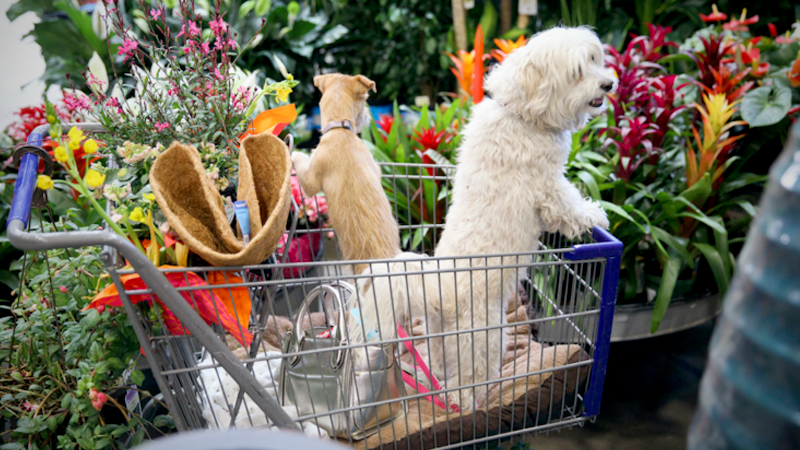 Pet dogs stand in a shopping cart inside a Lowe's Cos. Home Improvement Warehouse store in Burbank, Calif., on May 19, 2017. MUST CREDIT: Bloomberg photo by Patrick T. Fallon.

At Archer-Daniels-Midland Co.'s new animal-nutrition lab in Decatur, Illinois, food scientists aren't coming up with the next generation of rations for the world's pigs, cows or chickens. They're making dog cookies.

Just-baked bone-shaped treats containing ancient grains including quinoa, buckwheat and chia sit on a lab counter that looks more like a large kitchen island. The smell is so good they could be mistaken for real cookies. And that's the objective, as animal lovers across America increasingly project their personal tastes on their cats and dogs.

Dog treats may seem like a strange bet for one of the world's largest traders of crops such as corn, wheat and soybeans. But the $91 billion pet-food market is growing so rapidly it will be almost as big as the chocolate confectionery market by 2024, according to data from Euromonitor International Ltd.

"What we are seeing is a trend toward humanization of pets, so pet food solutions and labels are starting to mirror more and more what the pet owners are thinking and eating," Ian Pinner, vice president of growth and strategy at ADM, said in an interview. "Think about gluten-free pet food. It's a very small category, but it's a category that's growing very quickly at the moment."

The newly-opened research center is part of ADM's push to transform itself into an ingredients and animal-nutrition business, a drive largely responsible for billions in acquisitions in recent years. This year's $1.8 billion buyout of Neovia, ADM's second-biggest deal ever, expanded the pet-food business from just supplying ingredients, premixes and treats to manufacturing and owning consumer brands.

ADM is already seeing strong results. In the third quarter, the nutrition unit -- which also contains Wild Flavors, a maker of flavors, colors and food ingredients -- accounted for 17% of earnings before interest, taxes, and amortization, up from 9.5% a year earlier.

Dogs and cats have become so popular that American households now have more pets than children. As a result, the pet-food market is expected to have grown at an average annual rate of 5.5% to $91 billion in the 10 years through 2019, according to Euromonitor data. By 2024, the researcher found, pet food sales may hit $115 billion, just $1.1 billion less than the chocolate market.

Pet food usually contains a blend of meat and grains, including corn, wheat, rice and soy products. But just like in human food, the gluten-free craze is spreading with pet owners increasingly seeking grain-free options. Many brands and treats have replaced traditional recipes with ingredients that include pea protein, sweet potatoes and even tapioca starch.

"As we humanize pets, there are more and more ingredients being introduced," Ryan Lane, president of ADM's North American animal-nutrition business, said in an interview in Decatur. There's now a value proposition with things like food without wheat, or corn or soy, he said.

"That has been the biggest change over the last five years," Lane said. "And our specialty ingredients business can supply those."

As consumers become more demanding, so do ADM's customers.

The 117-year-old agriculture giant is working harder to cater to customer needs as it develops new products. To prototype treats for clients, for instance, ADM's lab has a 3-D printer that can make "on the spot concepts and designs for what might be a new dog treat," Pinner said. The research center is also focusing on aquaculture, another growing area for ADM, and should have salmon and shrimp tanks in operation by 2021.

Just like for humans, taste is crucial. The pet treats ADM develops are tested in partnership with the University of Illinois. Dogs will get two bowls of dog food and scientists will note their preferences. Studies also take into account if a dog has a right or left paw preference, meaning they have a tendency to turn one way or the other when deciding which bowl to focus on. And surprisingly, taste is also important for fish.

"Salmons are carnivores and they will spit it right out if it doesn't taste right," Lane said.

Overall, Americans last year spent around $72.6 billion on everything from pet food to veterinary care, a figure that's expected to rise by 3.9% this year, the American Pet Products Association estimates.

"If you think about labels, wanting to be more nutritious and less processed, healthier and more traceable, I think those are trends you'll see coming through companion animals as well," ADM's Pinner said.