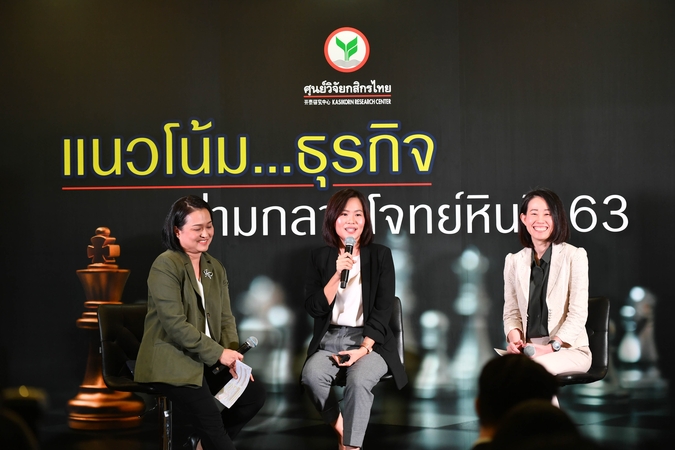 Kasikorn Research Centre has revised downward its gross domestic product (GDP) forecast for 2019 to 2.5 per cent and projected that the Thai economy may grow 2.7 per cent in 2020.

The centre revealed the forecast at its seminar on "Business Outlook amid Numerous Challenges in 2020" on Monday (December 9).

Nattaporn Triratanasirikul, KResearch assistant managing director, said that KResearch's downward economic growth revision for 2019 to 2.5 per cent from 2.8 per cent can be attributed to lacklustre export performance which has been caused by the protracted trade war and the stronger baht, less-than-expected overall investment and delay in the enactment of the budget expenditure bill for FY2020.

"For 2020, GDP is projected to grow 2.7 per cent (within a projected range of 2.5-3.0 per cent). We hope that the economy will be mainly driven by the push for the draft bill on budget expenditure for FY2020 and disbursement acceleration."

However, as the political uncertainty at home may prompt a delay in the injection of a new budget into the economic system, which will affect private sector confidence, GDP may see growth of 2.5 per cent or less, which is at the lower end of KResearch's projection range.

Meanwhile, exports may continue to shrink due to deceleration in Thailand's major export markets, the US-China trade war which is unlikely to be resolved anytime soon as well as the baht's relentless rise, especially amid the expectation of another rate cut by the Fed next year which will put greater pressure on the US dollar.

The loan growth next year is expected to stay unchanged at 3.5 per cent. Non-performing loans may increase from 2019, while the banks' fees are likely to grow no more than 1-2 per cent and there may be additional impacts from the government's policies.

Additionally, downward trend of the interest rates and the government's signals to commercial banks to help their customers will affect an adjustment of lending and deposit interest rates, which will in turn pressure net interest margin (NIM).

First of all, the expected stronger baht in 2020, when compared to the 2019 average, will not only affect the export sector but also lead to a shrinkage or reduction of the manufacturing output and possible job losses. Based on preliminary estimations, over 30,000 jobs in the manufacturing sector will be affected after almost 100,000 jobs disappeared in 2019.

Meanwhile, the drought in 2020 is forecast to be more severe than in 2019 as the water levels in various dams in Thailand have dropped drastically since the beginning of this year.

The drought may result in a contraction in the gross domestic product of the agricultural sector and farmers' income. It remains to be seen whether the drought next year will record another historically severe condition as seen in 2015-16. The outlook should be clearer in the first 3-4 months of 2020 when it will become known whether Thailand will experience a long dry season next year.

Regarding the latest daily minimum wage rise, although its impact on 2020 inflation will likely be limited, it may present a challenge to the business sector.

An average increase in the daily minimum wage of approximately Bt5 will cause average labour cost to rise by another 0.3 per cent while the agricultural business will be adversely affected by the stronger baht, drought and rising labour costs.

This may force the government to introduce specific policies to aid this sector.

Meanwhile, the property sector has not recovered yet because there are around 200,000 accumulated unsold residential units in the market, which is too high for property developers to clear within a short period of time.

Among the businesses that continue to thrive is tourism. Although international tourist arrivals to Thailand are projected to grow at a slower pace of approximately 2-3 per cent in 2020, declining from a prior estimate of about 4 per cent in 2019, some inbound tourism markets, including China, Asean and India, as well as domestic tourism will likely help create travel-related business opportunities in Thailand.

The government may continue to promote or introduce tourism stimulus measures as one of the tools to boost the Thai economy in 2020 because tourism accounts for as much as 18 per cent of GDP.