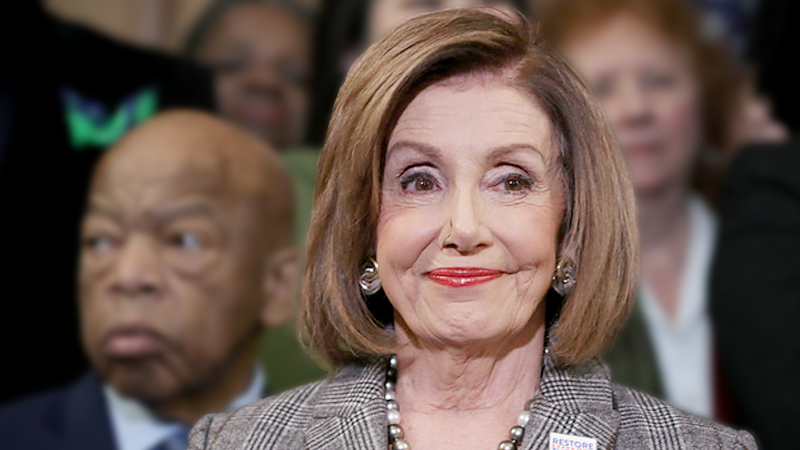 "There is no question that this trade agreement is much better than NAFTA. It is infinitely better than what was initially proposed by the administration," said House Speaker Nancy Pelosi, speaking hours before representatives of the U.S., Mexico and Canada are expected to sign the revised deal at a meeting in Mexico City. "We're declaring victory for the American worker."

In a major win for the Trump administration, the nation's largest labor federation backed the compromise.

"We demanded a trade deal that benefits workers and fought every single day to negotiate that deal; and now we have secured an agreement that working people can proudly support," said Richard Trumka, the president of the AFL-CIO.

Trumka called the revised accord "a vast improvement over both the original NAFTA and the flawed proposal brought forward in 2017."

The agreement is the first to include "enforceable labor standards," which will include inspections of suspect manufacturing sites in Mexico, he said.

In a series of Twitter posts Tuesday, Trump hailed the breakthrough.

He wrote that the "Trade Bill is looking good. It will be the best and most important trade deal ever made by the USA. Good for everybody - Farmers, Manufacturers, Energy, Unions - tremendous support. Importantly, we will finally end our Country's worst Trade Deal, NAFTA!"

He later wrote that it was "Looking like very good Democrat support for USMCA. That would be great for our Country!"

The U.S. Chamber of Commerce and other business groups also announced backing for the compromise hammered out between congressional Democrats and the Trump administration.

Democrats said they had secured specific changes in the text signed by Trump and the leaders of Mexico and Canada one year ago. The Democratic revisions eliminated a provision in the deal that would have extended data included tougher environmental standards

"We made this agreement," said Rep. Richard Neal, the chairman of the House Ways and Means Committee.

It would create new intellectual property protections, require more North American parts to be used in automobiles to qualify for zero tariffs, open the Canadian milk market to U.S. farmers, and create new rules for e-commerce. It would also boost wages, benefits, and safety rules for workers and put in place updated environmental protections.

The changes would impact a wide range of industries, including agricultural, pharmaceutical, automotive, and manufacturing.

U.S. Trade Representative Robert Lighthizer and Trump son-in-law and senior adviser Jared Kushner are expected to be in Mexico on Tuesday to help secure the pact.

Senate Republicans are preparing meetings for Lighthizer to brief senators on the details of the proposed agreement, including one for members of the Finance Committee later this week and another tentatively for all GOP senators next Tuesday, according to people familiar with the planning who, like others, spoke on the condition of anonymity because plans were yet to be finalized.

Pelosi met privately Monday evening with several of her party members who have negotiated with Lighthizer for months to revise the initial trade agreement struck with Mexico and Canada for terms more favorable for Democrats. The House Democrats leaving the meeting declined to confirm a deal but signaled one was imminent, with Ways and Means Committee Chairman Richard E. Neal (D-Mass.) indicating that lawmakers could see "verification" of an agreement sometime Tuesday afternoon.

Neal, who was on a flurry of phone calls with Pelosi and Lighthizer over the weekend, also said the House should be able to hold a floor vote on the trade deal by the end of the year.

"If it's where we think it is and so forth and the pieces that we thought were critically important . . . are there and get a chance to look at that, then I will be satisfied," said Rep. Rosa DeLauro, D-Conn., a key figure in the party's left flank who had also been negotiating with Lighthizer.