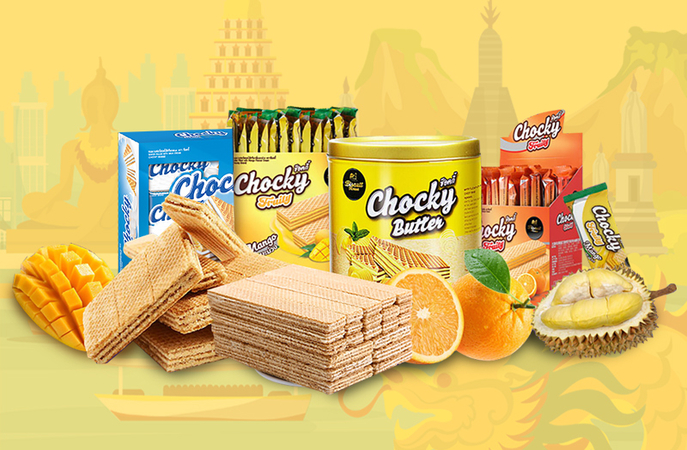 Thai brand Chocky was the top-seller in the wafer category during China's "Double 11" shopping festival, which ended recently.

Apart from the usual fierce competition from local businesses, the festival found growing consumer interest in high-quality imported foods. Thai brand Chocky, which has partnered with Beijing Tian Fu Ying International Trade Company, emerged the No 1 seller in the wafer category of Tmall from October 21 to November 11.

According to Frost & Sullivan, the sales volume of China's snack food industry reached Bt4.4 billion in 2018.

According to the General Administration of Customs China, the sales volume of imported foods in China grew at a compounded annual growth rate of 17.7 per cent from 2009 to 2018, and reached Bt2.15 billion last year.

With the continuous growth of Thailand's tourism market, Thai snacks have become the dark horse in 2019 "China Double 11". There are three reasons why Thai food represented by Chocky is widely loved by Chinese consumers. Firstly, Thai enterprises focus on food quality in export. Secondly, many enterprises are Chinese descendants, so they know how to customise their products based on Chinese taste while retaining Thai food's distinguished features. Thirdly, Chocky has partnered with Tian Fu Ying International Trade Co, who has been deeply engaged in the food market for over 10 years, and continuously promoted Chocky online and offline during the past two years -- this is a key factor in this old Thailand snack brand becoming popular in China.

The rapid growth of Chocky in China reflects the growing demand for quality imported food. According to Supra, director of the Guangzhou office of the international trade promotion office of the Ministry of Commerce of Thailand, the Chinese snack market has great potential and Thai enterprises should fully seize the opportunity. With the Belt and Road Initiative and strong online e-commerce channels in China, China-Thailand trade will be further strengthened in the future.