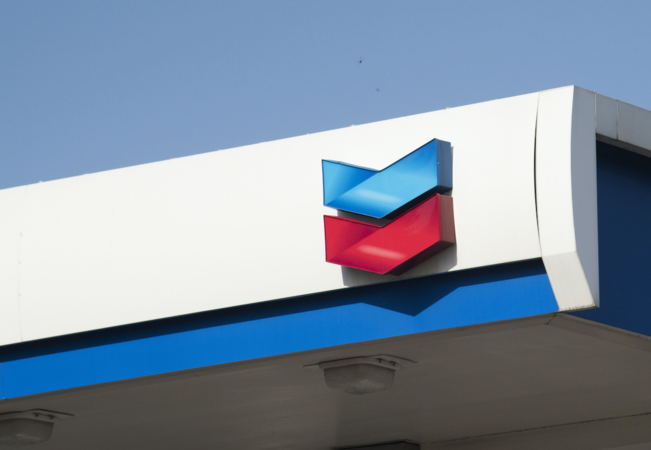 A Chevron gas station in Dallas on July. 26, 2017. MUST CREDIT: Bloomberg photo by Cooper Neill. Photo by: Cooper Neill — Bloomberg

Chevron Corp. expects to write down as much as $11 billion in the fourth quarter, more than half of it from its Appalachia natural gas assets after a slump in prices.

The U.S. oil major is considering the sale of its shale-gas holdings, along with its Kitimat liquefied natural gas project in Canada, according to a statement Tuesday. Chevron said it will keep its 2020 capital budget at $20 billion, the third consecutive year it hasn't boosted spending.

The company's actions come from a chief executive officer, Mike Wirth, whose mantra has been capital discipline. Wirth earlier this year earned $1 billion for the company by walking away from a bidding war for Anadarko Petroleum Corp. San Ramon, California-based Chevron is the best performer among the five Western oil majors this year, but it has faced mounting costs at its Tengiz project in Kazakhstan.

"The Appalachia writedown should be baked in, but the others are incrementally negative" for the stock, said Muhammed Ghulam, a Houston-based analyst at Raymond James & Associates. "I would expect most companies to have to write down gas assets this year."

Chevron follows Schlumberger and Repsol in ascribing a lower value to their assets at a time when the growing adoption of cleaner energy stokes speculation that demand for fossil fuels may peak in a few years, while supplies keep rising. The oil-services giant posted a $12.7 billion writedown in October, while the Spanish producer took $5.3 billion off its balance sheet last week.

The gas glut is particularly pronounced in North America where shale production is flooding local markets. Wirth said his decision to walk away from certain gas assets illustrates the company's discipline in protecting shareholder funds.

"The best use of our capital is investing in our most advantaged assets," Wirth said in the statement. "With capital discipline and a conservative outlook comes the responsibility to make the tough choices necessary to deliver higher cash returns to our shareholders over the long term."

Wirth has made crude production from the Permian Basin a centerpiece of his global strategy, with a budget of $4 billion for the shale play next year. The giant Tengiz joint venture in the Caspian Sea, whose total cost has surged to about $45 billion, will receive $3.75 billion from Chevron in 2020.

U.S. natural gas futures prices have slumped this year amid a supply glut, and are now averaging about $2.54 per million British thermal units. If it finishes the year at that level, it'll be the lowest average price since 1999.

The move to write down Appalachian gas is likely to put pressure on other producers in the region to do the same. Newly built gas export terminals along the U.S. Gulf Coast have so far failed to absorb the excess supply.

Chevron held more than 750,000 net acres in the Marcellus and Utica shale formations, which stretch from West Virginia to Pennsylvania and Ohio, according to a 2017 fact sheet on its website. The writedown also encompasses the Big Foot oil platform in the U.S. Gulf of Mexico, which began producing last year.