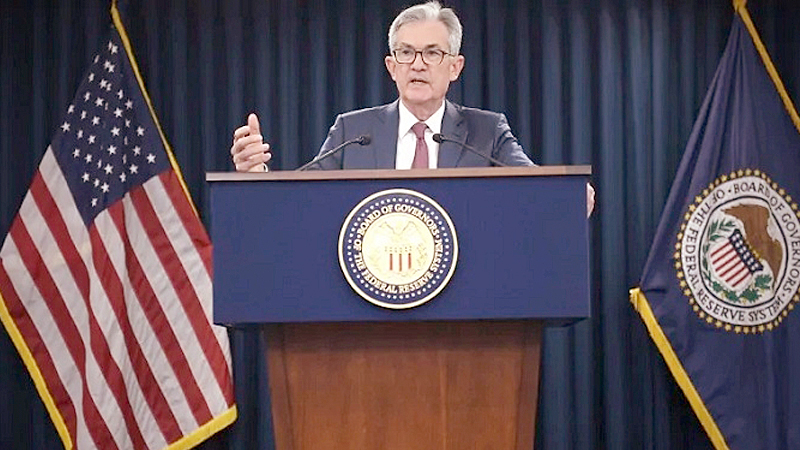 WASHINGTON - The Federal Reserve hit the pause button Wednesday, deciding to leave interest rates unchanged for now and signaling no plans to cut in 2020. President Donald Trump has repeatedly urged the Fed to slash rates, but the central banks says the U.S. economy is in a good place and does not need an extra boost.

The Fed lowered the interest rate in July, September and October in an effort to calm recession fears on Wall Street and counter the negative impact of Trump's trade war. The benchmark U.S. interest rate is just shy of 1.75 percent, down from nearly 2.5 percent a year ago.

A lower interest rate makes it cheaper to borrow money to buy a home and car or to start a business. It also means savers get less in monthly interest on the money they keep in savings accounts at banks. Many retirees have complained the Fed is hurting them by keeping rates down, but Fed Chair Jerome Powell has said his top goal is ensuring that the recovery, which is now in its 11th year, keeps going.

"We expect moderate growth to continue," Powell said in a news conference Wednesday. "We reduced [interest rates] by three-quarters of a percentage point. This shift has helped support the economy and has kept the economy on track."

Fed leaders predict the economy will grow 2 percent next year, a downgrade from 2.2 percent growth this year and 2.9 percent in 2018.

For months, the Fed has stressed there were many "head winds" and "uncertainties" about the economic outlook, but there is no longer any mention of that in the official statement, an indication that the central bank thinks the economy is stronger now than it was over the summer.

"Do-nothing Congress, and now do-nothing Federal Reserve," said Chris Rupkey, chief financial economist at MUFG Bank. "Looks like policy is stuck in neutral here at 1.75 percent without a recession or inflation, neither of which are very likely anytime soon."

Trump has blasted the Fed for allegedly keeping interest rates too high, calling central bank officials "boneheads." He has urged them to cut rates to zero, effectively allowing people and businesses to borrow money free. But Wall Street investors and most economists think the Fed will stay on hold for months to come. Investors are penciling in one more rate cut before the election, probably in July or September.

Powell left the door open to changing interest rates in 2020, but he stressed there is a high bar for moving rates up or down.

"We're going to do what we think is the right thing for the economy," Powell said. If there is a "material reassessment of our outlook, we would respond accordingly."

Recession fears peaked in August when the "yield curve" inverted - a warning sign that typically occurs a year or two before a recession takes hold. But the yield curve has returned to normal, and the chance of recession has fallen from about 50 percent in August to below 25 percent now, according to most analysts.

Stocks are now back at record highs. Unemployment is at a half-century low, inflation remains tame, and the economy continues to grow at a healthy pace around 2 percent, with little chance of a recession. Wall Street is also hopeful that Trump will not enact any more tariffs.

The Fed's policy-setting committee will holds its next meeting Jan. 28-29, less than a week before the Iowa caucuses begin the primary process to select the Democratic presidential nominee.

Sen. Bernie Sanders, I-Vt., is the only candidate seeking the Democratic nomination who agrees with Trump that interest rates are too high. Most Democrats do not think it is appropriate for the president to weigh in on monetary policy, which is supposed to be independent of politics.

"The big news was that the vote was unanimous for the first time in five meetings. This signals a higher level of comfort with the state of the economy," said Tendayi Kapfidze, chief economist at LendingTree.