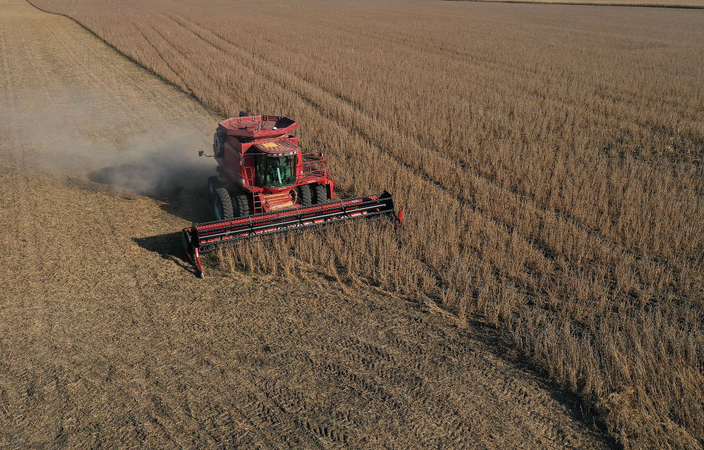 File Photo: Iowa: First Battleground State In The Presidential Election RIPPEY, IOWA - OCTOBER 14: An aerial view from a drone shows a combine being used to harvest the soybeans in a field at the Bardole & Son's Ltd farm on October 14, 2019 in Rippey, Iowa. The 2020 Iowa Democratic caucuses will take place on February 3, 2020, making it the first nominating contest in the Democratic Party presidential primaries. (Photo by Joe Raedle/Getty Images)

Doubts over how much agricultural goods China will buy as part of a preliminary trade pact with the U.S. dampened crop market optimism about the deal.

Prices for soybeans and hogs initially surged as Beijing held a Friday night press conference to announce a phase-one agreement that averts a new wave of tariffs on Dec. 15. But prices retreated from earlier highs after officials failed to specify volume targets for purchases, though they pledged to increase imports of U.S. agriculture goods by a "notable margin."

"Initially the market liked it, then the last 30 minutes we have given up all of the gains," Joe Davis, a director at brokerage Futures International in Chicago, said in a message. "Still waiting on details."

While Chinese officials didn't specify volume targets, they mentioned agriculture goods including soybeans, pork and poultry. They said wheat, corn and rice purchases will take place within quotas. Imports from the U.S. won't hurt the local farm industry, they said.

On Thursday, U.S. Agriculture Secretary Sonny Perdue said that while Chinese officials indicated they would buy $40 billion to $50 billion in American farm goods, they were reluctant to commit to contracts. On Friday, the officials didn't answer questions on the size of American purchases.

"The big takeaway from me is that China refused multiple times to give a value of U.S. ags they would buy as a part of this agreement," Niko Anderson, a grain broker at SCB Group in Chicago, said.

China stressed it has increased purchases based on market conditions and following WTO rules, adding it will be importing agriculture products from the U.S. and other countries.

"The other countries part is what worries me," said P.J. Quaid, a corn options broker on the Chicago pit. "South America will be able to take care of their bean needs soon. Lots of optimism this morning and that has all disappeared."

Soybeans, a bellwether of U.S.-China trade-deal sentiment, were up 0.6% at $9.1825 a bushel, after earlier rising by 2.1%. U.S. traders were pining on a potential rise in soy shipments to China, before top producer Brazil harvests what's forecast to be a record haul of the oilseed early in 2020.

Agriculture markets have been whipsawed this year as officials worked to hash out a deal. With the U.S. among the world's leading crop and meat shippers and China a major buyer, the more than yearlong trade spat between the two nations has weighed on commodity prices and upended global trade flows.

U.S. shippers sold about 900,000 tons earlier this week after China granted waivers on as much as 2 million tons to private processors, according to people familiar with the matter. China accounts for almost a third of global soy demand and American sales to China still remain well below levels before the trade dispute.

"This agreement is positive for de-escalating the relationship between the United States and China," Arlan Suderman, chief commodities economist at INTL FCStone said. "That alone is good, as it should allow for economic growth in China, the United States and the rest of the world. It does not resolve the larger issues between two super powers that are destined to clash once again."