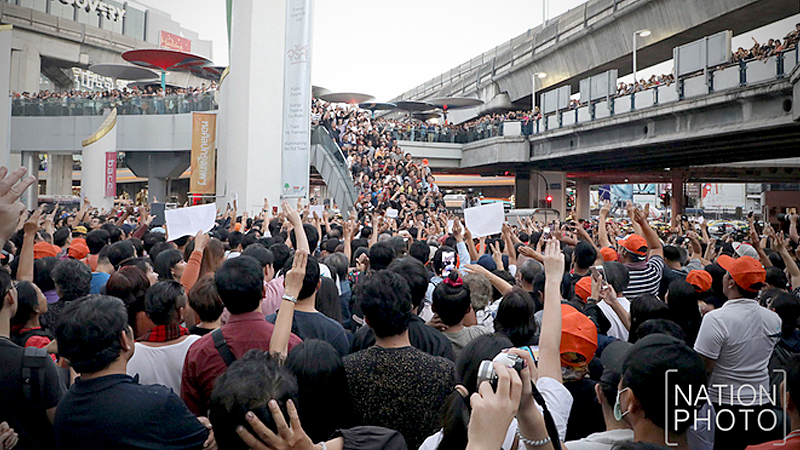 Thanathorn and his large crowd of supporters held a brief protest against the latest EC move on Saturday in downtown Bangkok and they vowed to intensify their fight against alleged dictatorship on streets next year.

External risk may decrease following the easing of US-China trade tensions, but domestic political risks may rise, an economist warned while a stock analyst advisee investors to go back to basics by diversifying their investment portfolio.

Anusorn Tamajai, the director of the Economic and Business Research Centre for Reform at Rangsit University's Institute of Economics, said that the global economy may be in better shape next year after the US and China reached a phase one deal of their trade agreement last week.

President Donald Trump has cancelled a new round of tariff hike on Chinese products scheduled to come into force on Sunday. US also agreed to cut by half the previous tariff hike while China agreed to purchase more of US farm products and promised to open banking, insurance, brokerage services as well as relax technology transfer regulations.

US investors on Friday were still confused about the trade agreement due to lack of specific details and numbers.

Anusorn said in a general context that the agreement may rescue global trade previously adversely affected by their trade war. World trade expansion will benefit Thailand’s exports and those of other countries, said Anusorn.

“Investors who previously planned to move their factories to Thailand and other Asean countries may review their plans following the US-China trade deal,” he said.

However, markets are still closely watching how the trade deal will further develop as the two sides agreed to negotiate a phase two deal.

The trade direction may be clearer after the US election next year, he said.

Asean countries have a competitive edge and offer generous incentives to foreign investors and may still draw in foreign direct investment, he said.

The impact of Brexit is seen as less worrying after the Conservative Party's triumph in the UK election.

“Thailand needs to accelerate free trade negotiations with both the United Kingdom and the European Union,” said Anusorn.

He warned about domestic policy risk following the Constitutional Court ruling to disqualify popular opposition leader Thanathorn Juangroongruangkit as a member of Parliament and the Election Commission (EC)'s petition to the court to disband his Future Forward Party.

“Political risk will increase because law enforcement does not uphold the rule of law, potentially leading to a political crisis, which will damage investor confidence,” he said, hinting at allegations of double standards of Thai courts and the EC.

Thanathorn and his large crowd of supporters held a brief protest against the latest EC move on Saturday in downtown Bangkok and they vowed to intensify their fight against alleged dictatorship on streets next year.

Meanwhile, Kavee Chukitkasem, the deputy managing director at Kasikorn Securities, said that trade tensions between the US and China is expected to continue as they rival each other for global leadership, therefore investors are advised to be cautious on the global trade front.

He, however, is optimistic that investment opportunities are also present even though stock markets are highly volatile. “We really don’t know what US President Trump will do next, but we can lessen investment risks by adopting a diversified investment strategy,” he suggested.

Investors may need to invest in both equities in emerging markets and developed markets, invest in bonds, gold and property, to shield themselves against risks, he added.