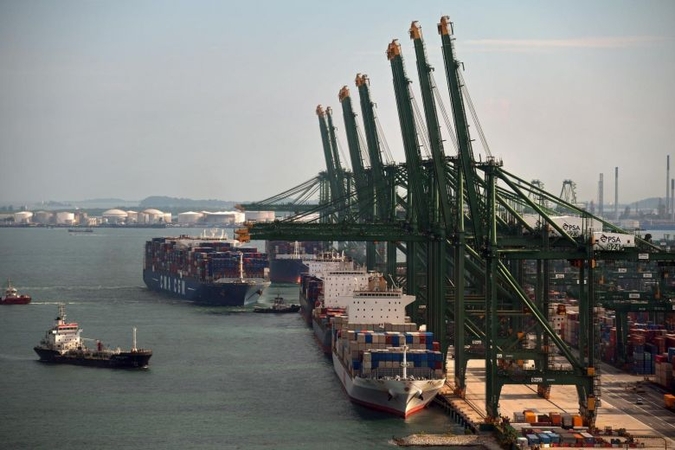 Shipments were down 5.9 per cent last month, following a revised 12.5 per cent plunge in October.PHOTO: ST FILE

SINGAPORE - Singapore's non-oil domestic exports (Nodx) continued to fall in November for the ninth consecutive month. But the contraction was less than analysts predicted, thanks to a small recovery in non-electronics exports.

Shipments were down 5.9 per cent last month, following a revised 12.5 per cent plunge in October, according to data released by Enterprise Singapore (ESG) on Tuesday ( Dec 17).

The figure was the best showing since February and beat analysts' consensus forecast of a 6.4 per cent year-on-year fall, as polled by Bloomberg.

Non-electronics exports returned to growth for the first time since February this year, with a 1.3 per cent improvement owing to stronger shipments of non-monetary gold, specialised machinery and non-electric engines and motors.

But electronics products shipments plunged 23.3 per cent – or $1 billion – from a year ago, worse than the 16.4 per cent drop seen in October. Integrated circuits, personal computers and disk drives contributed most to the decline.

UOB economist Barnabas Gan said that although the 23.3 per cent drop in electronics exports may seem alarming, it comes off a high base a year earlier. Also, in value terms, exports for these products recorded the highest figure in 10 months at $3.4 billion.

“So it seems like demand for Singapore products has improved, which is comforting,” he said.

“We think the electronics downturn is past its worst and a recovery, albeit sluggish, is underway. A partial US-China trade deal will help revive capital expenditure and exports, and electronics exports will likely emerge out of contraction by early 2020,” they said.

On the other hand, exports to emerging markets grew by 4.4 per cent, in contrast to the 26.6 per cent contraction in the previous month. The improvement was mainly due to the Cambodia, Laos, Myanmar and Vietnam markets, the Middle East and Latin America.

Oil domestic exports sank by 27.5 per cent last month, while non-oil re-exports grew by 2.4 per cent from a year ago.

Overall, total imports and total exports decreased in November, but by less than the declines in October. As a result, total trade slid 5.9 per cent year on year.

Last month, Enterprise Singapore cut its Nodx forecast for the full year to between minus 10 per cent and minus 9.5 per cent, a further downgrade from the minus 9 per cent to minus 8 per cent range previously.

But it expects Nodx to pick up next year, with growth in the range of zero to 2 per cent on the back of a gradual recovery in electronics.

UOB’s Mr Gan noted: “Industrial production figures have also improved, which tells us that manufacturers have a rosier trade outlook, because why produce when you can’t sell.”