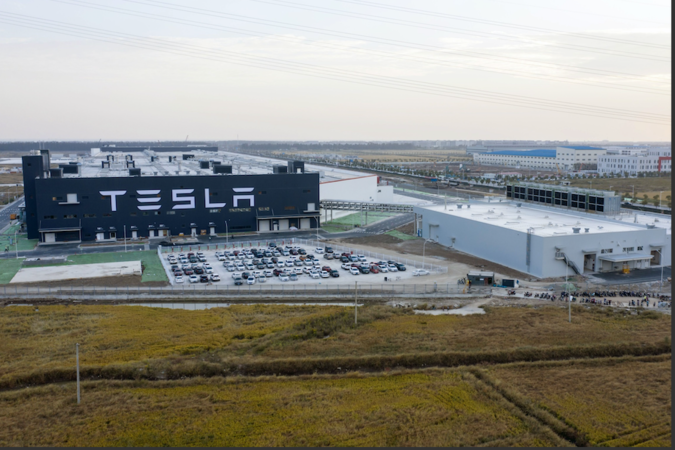 The first 15 units of Model 3 sedans assembled at Tesla's new multibillion-dollar Shanghai plant will be delivered to company employees on Dec. 30, according to a Tesla representative. MUST CREDIT: Bloomberg photo by Qilai Shen

Tesla Inc. secured a tax break in China just days before the delivery of its first locally built cars, marking a major milestone for Elon Musk's company as it pushes to expand in the world's largest electric-vehicle market.

The China-built Model 3 was included Friday on a list of vehicles qualifying for an exemption from a 10% purchase tax in the country. The first 15 units of Model 3 sedans assembled at Tesla's new multibillion-dollar Shanghai plant - its first outside the U.S. - will be delivered to company employees on Dec. 30, a Tesla representative said by phone.

Chief Executive Officer Musk is counting on the China plant to help build on recent momentum for the company in the world's largest market both for EVs and autos in general. The Model 3 will compete with electric cars from local contenders such as NIO Inc. and Xpeng Motors, as well as global manufacturers including BMW AG and Daimler AG.

The Shanghai Gigafactory, which only broke ground at the start of this year, is a crucial test of Musk's bid to keep his carmaker profitable as he bets big on Chinese appetite for electric cars. Originally just a muddy plot about a 90-minute drive away from Shanghai's city center, Musk has said he's never seen a factory built so quickly.

With Tesla's volatile stock price and strained finances, investors will be watching closely how the ramp-up unfolds. The multibillion-dollar investment will be a deciding factor to determine whether Tesla will be able to take on local competitors and fend off challenges by the likes of Mercedes-Benz, BMW and Audi.

The launch will also provide clues about Tesla's ability to truly go global. The company is planning to follow up with a production facility in Europe, where it is enjoying burgeoning sales growth in several markets.

Musk has predicted Tesla will make at least 1,000 cars a week in Shanghai by the end of the year - a volume the company's original factory in California spent months trying to hit - and has said a weekly rate of 3,000 is a target at some point.

Tesla said in October the locally built Model 3 will be priced from about $50,000. On top of the tax exemption announced Friday, the China-built model this month qualified for a government subsidy of as much as about 25,000 yuan ($3,600) per vehicle.

The company may lower the price of the locally assembled sedans by 20% or more next year as it starts using more local components and reduces costs, people familiar with the matter have said.