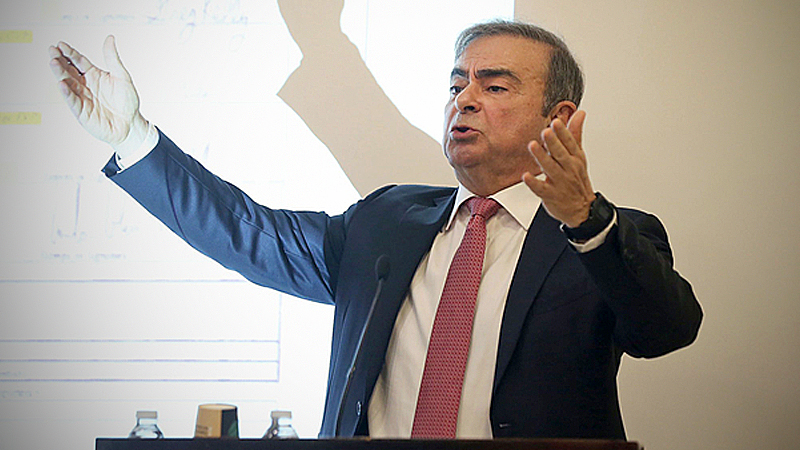 Carlos Ghosn, former chief executive officer of Nissan and Renault, gestures as he speaks to the media in Beirut, Lebanon, on Jan. 8, 2020. MUST CREDIT: Bloomberg photo by Hasan Shaaban.

BEIRUT - Former auto executive Carlos Ghosn was placed under a travel ban in his native Lebanon on Thursday, six days after the country received an Interpol red notice for the fugitive Lebanese national.

On Dec. 30, Ghosn made a stealthy exit from Japan, where he was under house arrest facing trial on four charges of financial misconduct during his tenure as chairman of auto company Nissan. He suddenly showed up in Lebanon, sending shock waves throughout Japan as officials scrambled to understand how he had escaped.

Ghosn said the procedures after his arrest in Japan in November 2018 were "anachronistic and inhumane." He said he was held for 130 days in solitary confinement in a tiny cell, allowed outside for only half an hour a day on weekdays. He said his interrogations extended into the night, sometimes reaching eight hours and in the absence of a lawyer, with lights left on round-the-clock.

"It's not very difficult to come to the conclusion that you're going to die in Japan or you have to get out," he said Wednesday during a news conference in Beirut, his first public appearance since his escape. He insisted that he was innocent and the target of a conspiracy to bring him down, and called Japan's justice system corrupt.

Japanese Justice Minister Masako Mori responded that Ghosn was spreading false information about the country's justice system and that his audacious escape could itself be a crime.

Ghosn appeared at a hearing in Lebanon on Thursday, two days after Lebanon's caretaker justice minister, Albert Serhan, said the country's public prosecutor had received the Interpol red notice about Ghosn and would be taking the necessary steps. He was placed under house arrest.

A few days after his arrival in Lebanon's capital, Ghosn found himself in more legal trouble: A group of lawyers last Thursday lodged a legal complaint against him for visiting Israel as chairman of Renault and later Nissan. Lebanon and Israel have been in a state of war for the past six decades, and Lebanese law considers interacting with Lebanon's southern neighbor and sworn enemy a crime.

Ali Abbas, one of the two lawyers who filed the Israel-related complaint against Ghosn, said the travel ban was a formality that usually comes after receiving Interpol notices, especially red notices, which alerts police about internationally wanted fugitives but does not compel any country to arrest the fugitive.

The Lebanese lawyer said evidence of Ghosn's dealings in Israel were in a legal memorandum he submitted, including a contract signed in 2015 that came into effect in 2017.

Abbas said that he and his colleague filed the complaint because no one should be above the law and that all nationals should be treated equally before the judiciary, regardless of economic class or social standing. It's an issue that Lebanon grapples with - "wasta," a mix of nepotism and connections, frequently helps some people avoid legal complications.

Abbas also said different rules should not apply for those fortunate enough to possess multiple passports. The court said Thursday that it is continuing investigations into Ghosn's Israeli connections.

Ghosn is a Lebanese, French and Brazilian national, and was asked to surrender his passports to his lawyers under the terms of his bail in Japan. But he was allowed to keep a spare French passport at his home in a locked case, the keys of which were held by his lawyers. His lawyers maintain that they did not assist in and were not aware of his escape.

During Wednesday's news conference, Ghosn said the allegations against him in Japan were "untrue, and I should never have been arrested in the first place." He claimed collusion between Nissan and Japanese prosecutors to edge him out to prevent closer relations between Nissan and French partner Renault.

Ghosn was charged with underreporting his income and diverting company funds for his own use. He said that not only had the income never been paid but that the final amount had not even been decided.

Speaking in a packed conference room from Beirut, Ghosn said he was happy to be in Lebanon.

"I don't consider myself a prisoner," he said. "I prefer this prison to the one I was in."