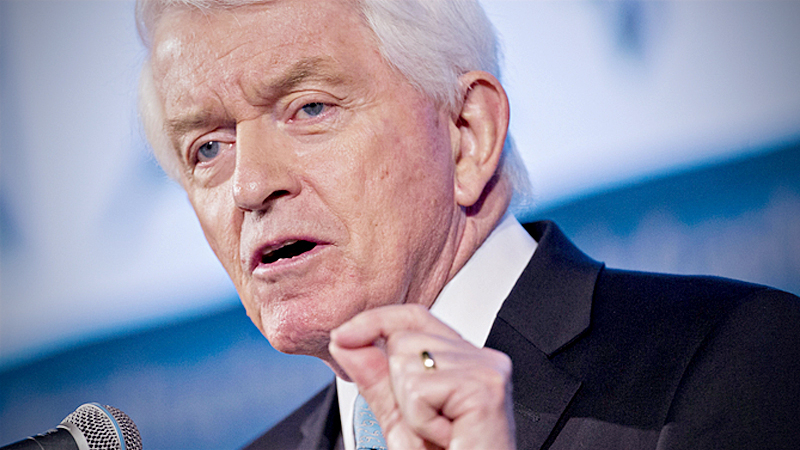 Tom Donohue, president and chief executive officer of the U.S. Chamber of Commerce, in Washington D.C. on May 15, 2017. MUST CREDIT: Bloomberg photo by Andrew Harrer.

Congress should move past gridlock and take the reins on issues such as privacy, where liberal states have enacted new laws, the leader of the U.S. Chamber of Commerce says in a Thursday speech.

"Washington's inability to make progress on data privacy is resulting in a patchwork of state rules and regulations that will stifle the free flow of goods and services across state borders," chamber Chief Executive Officer Tom Donohue said in prepared remarks.

As part of his annual "State of American Business" address, Donohue expressed worry about state-by-state approaches, particularly regarding data protection and worker classification in the gig economy, according to excerpts provided by the chamber, one of the most influential and highest-spending business associations in Washington.

California has enacted laws on both fronts, and a handful of other Democratic-controlled states are considering measures or have passed bills.

Divergent state laws "would create conflict for businesses, confusion for consumers, and increase costs for everyone," Donohue added in his remarks.

Like an array of business groups, the chamber has pushed Congress to pass a privacy law overruling state laws in order to smooth compliance and extend protections across the U.S. Many consumer groups worry, though, any law that gets bipartisan support in Washington would fail to provide the robust protections available in individual states.

California's new privacy law went into effect Jan. 1. Lawmakers on key congressional committees released a number of proposals for privacy legislation at the end of 2019, which revealed divisions between Democrats and Republicans over the role of state laws.

Donohue, in his remarks, also slammed the new California law that could force gig companies like Uber to reclassify their workers as employees, and thus guarantee employment protections for them like minimum wage and overtime.

"The business model that has revolutionized entire sectors of the economy will screech to a halt." he said. "The same is true for the innovation we are seeing in everything from home repair tasks to grocery delivery."

The California labor law dictates that workers can generally only be considered contractors if they are doing work outside the usual course of a company's business.

"It's not going to be a year of inaction," he predicted.

The address comes at a moment of transition for the chamber. Long associated with Republicans and a reliable source of campaign funds for conservative politicians, the group in recent years has expressed frustration with partisan gridlock that stalled its ambitions on issues like infrastructure. It has also objected to the trade-skeptic mood that has taken hold in the capital and in the administration of President Donald Trump.

Donohue, 81, who announced in his 2019 address that his group would evaluate lawmakers' bipartisanship while still emphasizing a pro-business agenda, is planning to step down after 2022. He took over the organization in 1997.

In addition to regulatory issues, Donohue was expected to address trade in his speech. The group has worked for months to secure congressional passage of Trump's revamped North American Free Trade Agreement, known as the U.S.-Mexico-Canada Agreement. The chamber, which steered a coalition backing the deal, said in December that it had held more than 1,000 meetings with lawmakers and congressional staff-members.

The agreement passed the House in December after Democrats negotiated changes to strengthen its labor, environment, drug patent and enforcement provisions, but a Senate vote may not come before next week.

Trump has also said he will sign the first phase of a trade deal with China on Jan. 15. As part of that agreement, China would increase purchases of American farm goods in exchange for lower tariffs on some of its products.