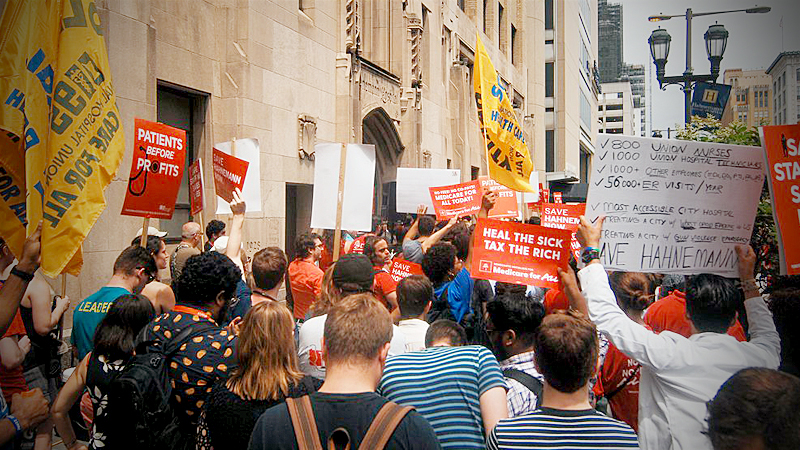 Hospital bankruptcies leave sick and injured nowhere to go. A quiet crisis is unfolding for U.S. hospitals, with bankruptcies and closures threatening to leave some of the country's most vulnerable citizens without care.

As a gauge of distress in the health-care sector has soared, at least 30 hospitals entered bankruptcy in 2019, according to data compiled by Bloomberg. They range from Hahnemann University Hospital in downtown Philadelphia to De Queen Medical Center in rural Sevier County, Arkansas and Americore Health LLC, a company built on preserving rural hospitals.

There's more distress to come. Already this week, the bankrupt owner of St. Vincent Medical Center in Los Angeles said it plans to shut the facility after a failed sale attempt.

The pressures on the sector are as tangled as the health-care system itself.

Americans are fleeing rural areas in favor of urban centers, reducing the demand for hospital services in already struggling communities. In both cities and towns, many hospitals that care for impoverished citizens often rely heavily on government payments that reimburse less than private insurers and may fail to cover rising costs.

The American Hospital Association, an industry group, calculated that payments from Medicare and Medicaid, the federal programs for the elderly and poor, lagged costs by $76.6 billion in 2018. Hospitals are also losing key income as more profitable procedures move to lower-cost outpatient centers.

If that weren't enough, with both Republicans and Democrats making a political football out of health care ahead of the 2020 presidential election, significant policy change could be near.

"How are you supposed to craft a business plan if you don't know if you're going to have an America with Medicare for all, or a complete repeal of the Affordable Care Act, or a million options in the middle?" said Sam Maizel, a partner with the Dentons US law firm who focuses on health-care restructuring. "If you knew Elizabeth Warren was going to get elected, you'd be writing a very different business plan."

Even before the election, the current system is being challenged, according to Georgetown University health-care policy professor Edwin Park. The Trump administration is trying to tighten eligibility rules for Medicaid, while a rule proposed late last year could also cut billions of dollars in supplemental payments to hospitals, he said. In a closely watched case, a district judge in Fort Worth, Texas is weighing whether Obamacare can survive after an appeals court ruled that its broad mandate requiring people to have health insurance was unconstitutional.

The usual playbook for managing distress doesn't readily apply. Shutting down a hospital isn't the same as boarding up a storefront. Hospitals are not only major employers, their closures often leave the most vulnerable patients bereft. Bankruptcy judges tend to push back on approving hospital closings in ways they wouldn't for a retailer, said Andrew Sherman, head of restructuring at law firm Sills Cummis & Gross.

In May, a 25-bed hospital in Sevier County, Arkansas shut down after sliding into such financial disrepair that a receiver was appointed, local newspaper The De Queen Bee reported. For many of the county's 17,000 residents, the hospital's emergency room provided the only such services within an hour's drive, court papers show. In suburban Chicago, Westlake Hospital was losing more than $1 million a month before it commenced a liquidation bankruptcy in August, sapping that community of about 550 jobs and 230 hospital beds.

In many rural areas, the population just isn't large enough to justify keeping the lights on, according to Bloomberg Intelligence analyst Mike Holland. Morgan Stanley analysts led by Vikram Malhotra in 2018 found that 8% of U.S. hospitals were at risk of closing and another 10% were considered weak. AHA statistics released Tuesday show the number of U.S. hospitals fell by 64 to 6,146 in 2018, the most recent year available.

There's little reason to believe the situation has improved. The Polsinelli TrBK Health Care Services Distress Index, which tracks bankruptcy filings in the health-care sector, had nearly quadrupled as of the third quarter. The index uses 2010 as its benchmark year.

"Most of the cases we see, you're struggling to survive on a cash basis to try to get to a sale process," Sherman said. "People need to understand that these hospitals will continue to falter. Communities are going to have to inject more money if they want to maintain health care."

Some of the more recent closings are the result of large health systems weeding out weaker facilities. That's the case with hospitals run by Community Health Systems Inc. and its spin-off, Quorum Health Corp.

Quorum's revenues have been falling since it separated from Community Health in 2016. After bleak third-quarter results, the company said it would ask lenders to modify its debt agreements and reiterated a warning that it may not be able to stay afloat. Its shares and bonds plunged in the aftermath.

Late last year, KKR & Co. offered to take the company private at $1 a share in a deal that may help it refinance and stave off deeper distress.

Community Health, meanwhile, has piled up about $5 billion in losses in recent years as it labors under more than $13.5 billion in debt. A concentration of rural hospitals dependent on Medicare and Medicaid hurts Community Health, BI's Holland said. Expanded insurance coverage under the 2010 Affordable Care Act, or Obamacare, also means more people are getting care earlier and not ending up in the company's hospitals, he said, or are being directed to lower-cost outpatient facilities.

"It's a problem now for hospitals to have sufficient inpatient revenues," said Eileen Appelbaum, co-director of the Center for Economic and Policy Research.

A representative for Community Health said in a statement that factors including its recent refinancing, asset sales and a program to increase margins have positioned the company to continue to improve its operating performance.

While rural hospitals are most at risk of failing, the controversial shutdown of Philadelphia's Hahnemann University Hospital could invite more disruption in urban centers, Appelbaum said.

Private-equity investor Joel Freedman bought Hahnemann in early 2018, but failed to revitalize the money-losing hospital and shut it after a trip through bankruptcy. Excluded from the filing, however, was its prime real estate in the heart of the city, which was separated into another entity.

Despite the successful 2006 acquisition of HCA Healthcare Inc. by a consortium that included Bain Capital LP and KKR, private equity has found it isn't easy to make money running hospitals, Appelbaum said. The Hahnemann case may provide a new template, she said, calling the transaction "proof of concept" that if a hospital isn't profitable, you can shutter it and sell the real estate.