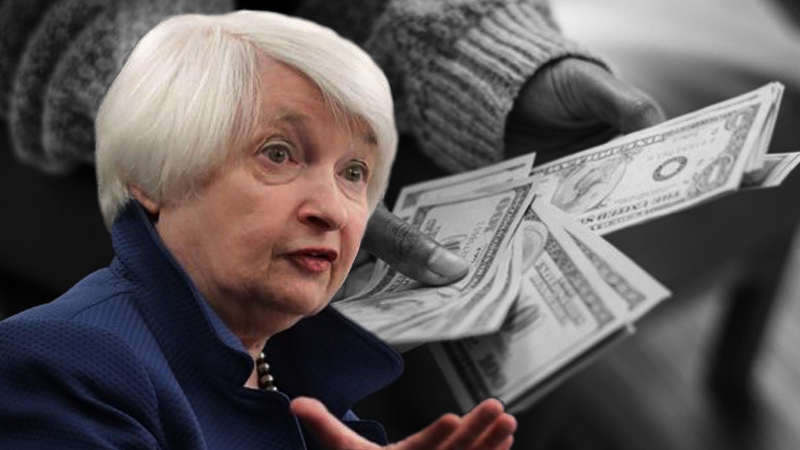 SAN DIEGO - Many top economists are coming around to the belief that it's OK, even preferable, for the United States government to spend more money, even if it means increasing America's $23 trillion debt.

When thousands of economists gathered for the annual American Economic Association meeting this month, there were overwhelming calls for more - and wiser - government spending. Leading economic thinkers laid out the case that the nation will almost certainly have to spend more during the next recession, that major challenges such as climate change and inequality will likely require more money, and that the United States is significantly under-investing in infrastructure and education.

"Even under current conditions, I think we can afford to increase federal spending or cut taxes to stimulate the economy if there's a downturn," said Janet Yellen, the former Fed chief who is the incoming president of the American Economic Association. "Chronic low interest rates create additional fiscal space."

Yellen's remarks are part of a growing chorus of prominent economists who are building the intellectual case for the United States to take on a bit more debt. They are not saying that politicians have a blank check to spend more or that higher debt doesn't have any negative consequences. The money still has to be paid back at some point - with interest.

But the consensus view is shifting among economists from a belief that debt harms the economy to a belief that responsible borrowing is warranted.

Yellen argued that the timing is right to make smart investments: It's cheap to borrow with interest rates so low and unlikely rise much any time soon.

Her call for more spending noticeably contrasts from her 2017 testimony before Congress that the long-term budget outlook should "keep people awake at night."

The academic conversation around spending more to strengthen the economy comes at a time when the federal budget deficit topped $1 trillion, due to the Trump administration tax cuts and increased spending. It was the first time the deficit broke the trillion dollar mark during a January to December period since 2012 when the economy was still recovering from the Great Recession. The deficit continues to rise, according to the latest Treasury report on government debt released Monday.

Some economists called for higher taxes, especially on the rich, to fund additional spending. And many denounced Trump's tax cuts as wasteful spending that could have gone toward other initiatives, including infrastructure. But there was a lot less worry about the current debt level.

"If you had been at the [AEA] meetings seven years ago, there would have been a lot of concern about entitlement spending. There's very little of that now," said Lawrence Summers, the former treasury secretary under Bill Clinton who helped craft the last balanced federal budget.

Indeed, many pointed to Japan, where debt is about 250% the size of the economy, as a good example that debt can rise a lot without triggering a doomsday scenario. Economic textbooks teach that too much debt can bankrupt a country and trigger massive inflation, which can cause a recession. But after years of high debt in Japan, investors are still willing to lend the country money, and Japan's economy is sluggish but stable.

U.S. debt is about 80% of GDP and is projected to grow to 95% of GDP by 2029, largely because of rising Social Security and Medicare spending as baby boomers age. But many argued that it's unlikely U.S. bonds would lose their status as one of the safest assets in the world if debt grew somewhat more.

"I would be very confident the United States would not go bankrupt," Summers said. He would support a "prudent" program of borrowing to finance "reasonable, prudent public investment," for example on schools and renewable energy.

That sentiment was echoed by many.

"We are in such bad shape on infrastructure," said economist Lisa Lynch, the provost of Brandeis University. "We had such a missed opportunity as part of the response to the Great Recession to really have doubled down on making major investments in our infrastructure."

The economists who attend AEA are largely academics. Several who spoke with The Washington Post estimated that 80% to 90% of the conference attendees are politically liberal, which could explain the heightened calls for the government to do more.

But others say economists' views are evolving on government spending, because circumstances have changed. Lower interest rates make borrowing and investing more attractive. And rapid technological advances make it more necessary for the United States to invest heavily to remain competitive.

The U.S. economy is growing at about 2%, a modest pace compared with prior booms. Summers has dubbed this "secular stagnation." Trump promised his tax cuts and deregulation would lift growth, which happened in 2018, but growth slowed closer to 2% in 2019. And economists say a big reason the economy rarely grows beyond 3% anymore is because of the aging population (fewer workers) and muted productivity growth.

Janice Eberly of Northwestern University's Kellogg School of Management put up a slide showing that while the U.S. government spends more dollars today on the military and domestic programs than it did in the 1960s, federal investment as a share of GDP is at an all-time low, which is likely hurting productivity and growth.

There's also the reality that if another recession hits, the Federal Reserve is unlikely to be able to do as much to rescue the economy. The Fed typically cut rates 5% points during prior recessions. The Fed's benchmark rate is already just shy of 1.75%, leaving little room to goose the economy.

"We don't have monetary policy. It's very limited at the moment," said Kenneth Rogoff, a Harvard economics professor who foresaw much of the 2008 financial crisis.

With monetary policy hamstrung, Congress would likely need to spend more during the next recession to help revive the economy, but Rogoff said he is "not at all optimistic" that can be done.

Several economists, including Summers, proposed "automatic stabilizers" for the economy, which are measures such as payroll tax cuts or extra food stamps that would take effect once the unemployment rate climbs to a high rate. But it would take an act of Congress to set up the automatic stabilizers, which seems unlikely in the current political environment.

Other economists called for bolder moves for the government to spend more on addressing climate change by funding more research on green technologies. There were also calls for the government to better address inequalities, such as giving children from low- and moderate-income families "baby bonds" that can help pay for college and other springboards to a better life.

"Everybody now assumes that social programs and social safety nets require more resources," said Dani Rodrik, a Harvard economics professor. "Nobody stood up and said all of this inequality is because the government is doing too much."