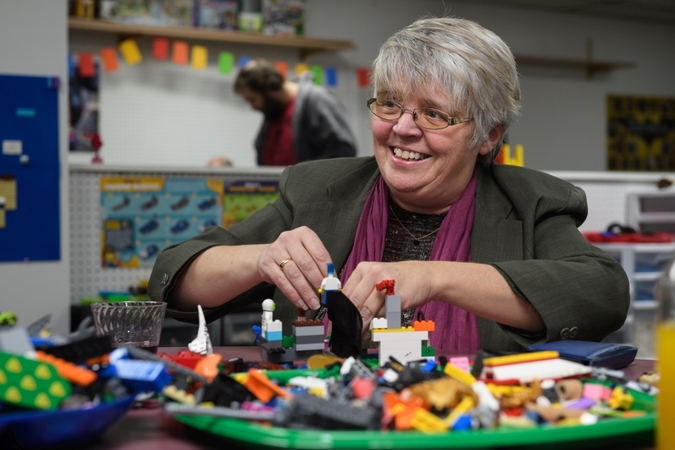 Cris McDonough, 57, of Connellsville, Pa. builds Legos during a BYOB adults-only build event at Brooke's Block Party, an event space. MUST CREDIT: Photo by Justin Merriman for The Washington Post.

Elisabeth Briggs finds calm in clicking small, interlocking bricks together and turning piles of multicolored plastic into something recognizable.

Sometimes she has a beer while playing with Lego bricks - at 37, she's allowed - or watches TV. But she keeps the instructions close by, following them to the block.

For Briggs, this ritual has become a kind of guided meditation with a tangible reward at the end: a big city skyline, perhaps, or an iconic building she can display in her office. She picked up her first Lego building set, a 321-piece replica of the Eiffel Tower, for $35 after a trip to Paris, and now has nearly three dozen kits that mirror her travels, including Buckingham Palace, the Louvre and the Golden Gate Bridge.

"It's fun to zone out and follow someone else's instructions," said Briggs, a math teacher at Olympic College near Seattle. "It wasn't until I got older - and had a job and more money - that I saw value in that."

Lego, the world's largest and most profitable toy maker, is zeroing in on a growing demographic: Stressed-out adults. The 87-year-old Danish company increasingly bills its brightly colored bricks as a way to drown out the noise of the day and perhaps achieve a measure of mindfulness. The company's newest kits - which include the Central Perk cafe from the sitcom "Friends" and a vintage 1989 Batmobile - tap into Gen X nostalgia, while its Ideas and Forma lines are being targeted to adults who want to occupy their hands but keep their minds loosely engaged. Adults have become a coveted market for toy makers confronting increased competition and waning sales growth, and it doesn't hurt that they're more likely to drop $800 on a 7,541-piece Star Wars Millennium Falcon set or $400 for the Harry Potter Hogwarts Castle on Briggs's wish list.

"Adults with high-pressured jobs are telling us they're using Lego to disconnect from the mania of the day," said Genevieve Capa Cruz, Lego's audience marketing strategist. "They're looking for a relaxing, calming experience - and they like instructions because that's what helps them be in the zone."

The company spent the past five years revamping instruction manuals to make kits foolproof for frazzled adults, she said. Last year, Lego introduced a line of koi fish and shark models with soothing movements to appeal to builders in search of a "joyful creative challenge."

Lego's appeal, of course, has long spanned generations. Adult Fans of Lego - known colloquially as AFOLs - have inspired dozens of Facebook and Reddit groups and at least one "blocumentary." A new book aims to teach older users how to use the bricks as a form of stress relief, not to create complicated models but to simply revel in the process. And a competition show, LEGO Masters, which premieres next month on Fox, pits adult builders against each other. (Think "The Great British Bake Off," for Lego.)

But the toy giant is increasingly looking beyond die-hard hobbyists to court the casual builder in search of modern-day tranquility. "Need an escape?," asked a recent Lego ad on Instagram. "Building with Lego bricks reduces stress and improves your well-being. It's zen, in the shape of a brick." 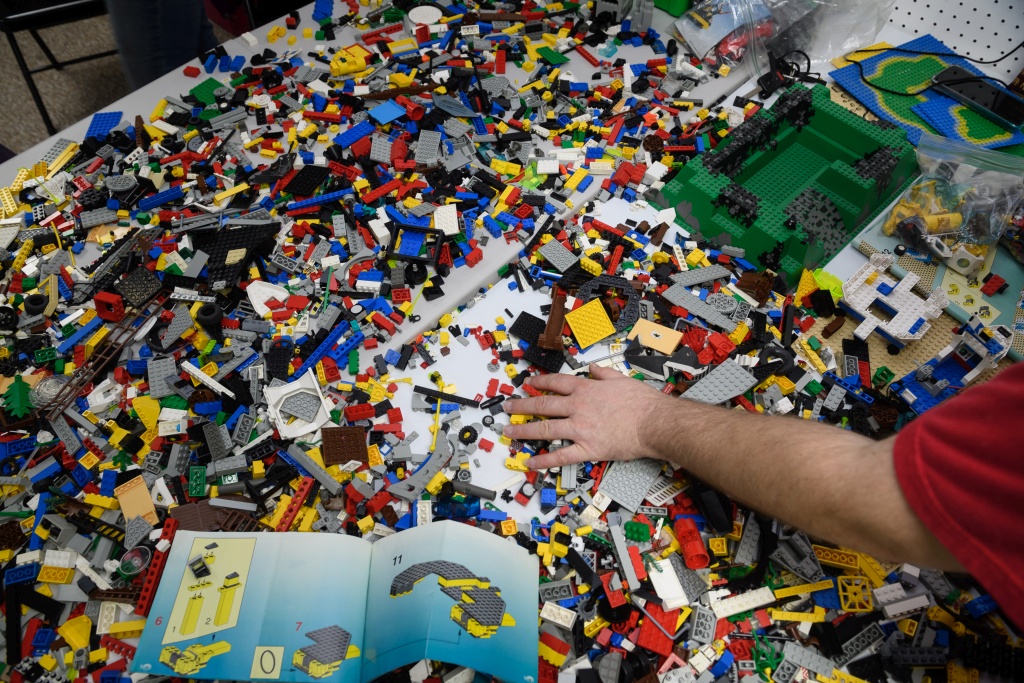 Mindfulness is a meditative practice rooted in ancient Buddhism and Hinduism that focuses on the present without dwelling on the past or worrying about the future. It has been shown to alleviate stress and anxiety, improve sleep, and even lower blood pressure. In recent years, mindfulness has become a mainstream buzzword, with corporations like Apple, Nike and HBO adding meditation rooms for employees, and apps like Headspace and Calm promising to help the masses find peace. And Lego is hardly alone in latching on to it as a selling point: Companies now offer "mindful knitting" workshops, while a growing roster of books promises mindfulness through coloring, crosswords and crafting.

Any repetitive activity - embroidering, sweeping, or yes, clicking together Lego bricks - can help strike the right balance between mental engagement and relaxation, says Carrie Barron, Director of Creativity for Resilience at the University of Texas at Austin's Dell Medical School. "To focus singularly on a task is a form of mindfulness."

And, she added, Lego's instruction booklets serve an important role, too: "We like to have structure and a clear path. The idea that 'if you follow this, you'll achieve that,' is very appealing."

Abbie Headon hadn't touched a Lego for a good 20 years when the Danish toy giant called with an assignment: Write a book for stressed-out adults, like her, who hadn't played with the blocks in decades. She bought a small bag of pieces and got to work.

"The point is to free your mind of other distractions and focus on play, even if you just have a handful of pieces," said Headon, 44, who is based in England.

Her 160-page book, "Build Yourself Happy: The Joy of Lego Play," was released in the United States last month. Chapters like "Be a Child Again" and "Builds to Help You Sleep" implore adults to play in new ways: Build something with your eyes closed. Create a rainbow. Build the tallest tower you can. There are also practical considerations: A chapter on "the life-changing magic of tidying your Lego bricks" offers suggestions on sorting and storage.

"The fun isn't just, I'm going to build this and it's going to be perfect," Headon said. "That's one of the great things about Lego: There's no risk. You can always just take it apart and start again."

These days Headon keeps a cardboard box of Lego pieces on her desk. They're therapeutic, she says, even if she's not actively playing with them.

"I like to have something in my hand when I'm thinking, so I'll grab a few Lego pieces and click them together and apart," she said. "It's very satisfying."

The earliest Lego bricks, introduced in Denmark in the late 1940s, consisted mainly of rectangular pieces in a handful of colors. Over the next decade, it added doors and roofs, as well as trees, bushes, road signs and curved plates, according to the online database Brickset. By the time it started exporting to the United States in 1961, sets had become more elaborate, replicating airplanes, boats and fire stations.

But by the late 1990s, the company was on rocky ground. The simple plastic brick had fallen out of favor as children became enthralled with video games, computers and fads like the Tamagotchi digital pet. Lego posted its first-ever loss in 1998.

Even so, Lego is facing many of the same head winds as its rivals. Sales growth has held steady at about 4% since 2018, a sharp drop from the 17% a year average seen the preceding decade. Competition is growing - not only from other toy makers, but also smartphones and apps that are devouring a bigger portion of children's allowances. Plus, analysts say, today's parents would rather spend on experiences than stuff. U.S. toy sales fell about 5.5% in the first nine months of this year, according to NPD Group.

Selling blocks - or puzzles or action figures - to adults has become one way for toy makers to counteract the slowdown. Competitors like Playmobil are taking note too, by rolling out programs that they say will help corporate employees "find new business solutions." "The rise of adult fans is driving the toy industry," said Byrne, a New York-based consultant who bills himself as the Toy Guy. "Who do you think is buying the $499 Death Star or the $399 Hogwarts Castle? That's all being made for adults who have their own money to spend."

The submissions pour in by the dozens - and more often than not, they're hankering for an earlier era.

Scroll through Lego Ideas, the crowdsourcing platform the company introduced in 2008, and you'll see proposals for sets commemorating the 1964 musical "Mary Poppins" and "The Golden Girls," the NBC sitcom that first hit airwaves in 1985. Lego fans vote on their favorites, and a panel green lights a handful of projects each year. Recent approvals include a "Ghostbusters" 30th anniversary set, a DeLorean Time Machine from the 1985 film "Back to the Future," and a Beatles-inspired yellow submarine.

"There is so much nostalgia, especially among Gen X," said Capa Cruz of Lego.

This generation of Americans, sandwiched between baby boomers and millennials, was the first to grow up with Lego, Byrne says. Now in their 40s and 50s, they are among a growing group of adults hoping to unplug from their phones and computers.

But she quickly found another group clamoring to play: parents.

She now hosts regular adults-only evenings where locals sip wine and put together "Doctor Who" sets and replicas of Frank Lloyd Wright's Fallingwater. One group of dads has been working on a 1,366-piece Star Wars Imperial Star Destroyer for two years.

"It's like a blast to the past, straight to our childhoods," said Deason, 40, who lives in Connellsville, Pennsylvania. "It took me by surprise, but it makes sense: Life is so structured. But with Lego, you can do anything."

Deason has a few million Lego pieces, which she organizes by type and color. The Star Wars and architecture sets, she says, are the most popular among adults, who almost always look for the instruction manuals.

"The younger kids come in and it's all about their imaginations - playing pretend, building zombie towns," she said. "But at some point that gets lost. The adults seem to value the final finished project. That's where they get their satisfaction.