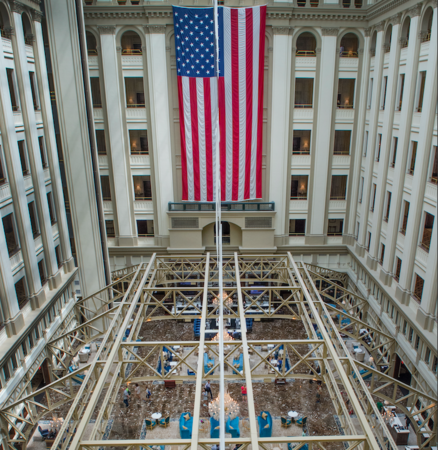 A view of the Grand Lobby of the Trump International Hotel in Washington in June 2017. MUST CREDIT: Washington Post photo by Linda Davidson

Trump hotel's mix of GOP insiders and hangers-on helped give rise to impeachment episodes. WASHINGTON - They are key locations in the drama that led to President Donald Trump's impeachment: the steakhouse table where Trump's private lawyer set out a nameplate, "Rudolph W. Giuliani, Private Office." The upstairs hideaway, where Giuliani's team planned its outreach to Ukraine.

And the expensive bar, where Giuliani's team met an odd figure: Robert Hyde, a big-talking ex-Marine who claimed to have the U.S. ambassador to Ukraine under surveillance.

All three places are within 300 yards of each other, in the lobby of the Trump International Hotel.

For three years, President Trump's hotel near the White House has been a loose, anybody-welcome hangout for Republicans: Candidates raise money in the ballrooms. Congressmen and lobbyists dine in the steakhouse. Hangers-on wait at the bar, taking selfies in "#americaslivingroom."

That arrangement worked for Republicans, because it compressed a city's worth of networking into one room. It worked for Trump, because he converted political allies into private customers.

But the hotel's atmosphere of blurred lines - mixing the public interest with Trump's private interests, and mixing the GOP's leaders and its wannabe fringes - helped give rise to a scandal that threatens to overshadow Trump's presidency.

Giuliani and his team didn't just meet at the Trump hotel. They embodied its world.

"I spent two years going to Washington and I didn't see the monuments," said Lev Parnas, who was a central figure in Giuliani's effort to pressure Ukraine to investigate Trump's political rival, former vice president Joe Biden. "All I saw was the Trump hotel."

Trump opened his hotel before he won the presidency, having spent more than $200 million to renovate the government-owned Old Post Office building near the White House. After he won, Trump kept his ownership of the hotel, operated under a federal lease.

But its business model had to change sharply, according to hotel employees.

They shifted to focus on the part of the business that was thriving: the lobby, with its bar and BLT Prime steakhouse.

The place where pro-Trump Republicans see and be seen.

"There were many, many of them that were just there, who we just happened to run into," said Seth Morrison, executive director of the Orange County, California, Lincoln Club. Morrison said his group stayed at the Trump hotel last year on its biannual Washington trip, and encountered a slew of candidates and conservative TV personalities in the lobby. "Eric Bolling was there for like three days in the lobby," Morrison said of the conservative commentator.

Instead of being a hotel with a lobby, the Trump property became a lobby with a hotel attached.

It raised prices at the lobby bar: Candied bacon went from $14 to $22. The most expensive cocktail on the menu had been $21. Then they added one for $100, with caviar in it.

The hotel also spent big on upgrades to the lobby and restaurant: $264,000 for new lobby furniture. An additional $24,000 on carpets in the first-floor hallways. And $15,000 for a new ice-cream maker for dessert specials, according to hotel documents obtained by The Washington Post. At the same time, the hotel had to shut down its outdoor patio because of anti-Trump protesters.

Just as Republican business was reshaping the Trump hotel, the Trump hotel was changing the GOP - by bottling up its top leaders with any wannabe who sat at the bar.

"POTUS doesn't know, or maybe doesn't care, but that hotel is the root of many of his problems," said one Republican who is close to Giuliani and Trump, and spoke on the condition of anonymity to preserve relationships with them.

Trump himself has come to the hotel at least 18 times, including for three of his own campaign fundraisers, where he is both the candidate and the caterer.

In addition, top GOP-aligned lobbyists such as Brian Ballard and Jeff Miller also work the room. And Republican National Committee Chairwoman Ronna McDaniel convenes some of the party's top operatives for a monthly "off-the-record dinner," in a private room at the hotel. Over wine and steak - the price tag is about $3,000 per month and paid for by the RNC, officials say - party officials, lobbyists, White House aides, officials leading Republican super PACs and congressional political leaders meet to talk business.

"You've got top confidants of the president hanging out in the hotel lobby, and you can mingle with them for the price of a $20 glass of wine," said Zach Everson, a journalist who chronicles the Trump hotel's mixing of politics and business on the blog 1100 Pennsylvania. By Everson's count, 25 people who have served in Trump's Cabinet have visited the hotel, along with 30 of the 53 Republicans in the Senate.

No figure embodied that mixing better than Giuliani, the former New York mayor who has reinvented himself as a lawyer, fixer and off-the-books emissary for Trump.

"Rudy is probably the most senior person who's readily accessible to the public for the price of a drink," Everson said.

Giuliani claimed enormous private influence. But at the Trump hotel, he sat out in public, spending hours at his "private office," a table in the lobby steakhouse's bar. One former Trump hotel staffer said that Giuliani was so comfortable there that he sometimes left without paying - "like he was at home." The restaurant often had to eat the bill, the former employee said - who spoke on the condition of anonymity to preserve relationships in the hospitality business.

At that table, Giuliani met repeatedly with Parnas and Igor Fruman, a pair of Soviet-born Americans who were seeking influence in Republican politics - and helping Giuliani pressure Ukraine to provide dirt on Biden. On the day Parnas and Fruman were arrested, charged with campaign-finance violations unrelated to Ukraine, they had previously had lunch at the Trump hotel.

"It was like a breeding ground at the Trump hotel," Parnas told MSNBC's Rachel Maddow in an interview Wednesday night. "You would see the same people every day, all the same congressmen that supported the president would be there, nobody else."

When the group needed more privacy, Parnas told Maddow, they retreated to a private space: "our BLT office on the second floor."

"At the Trump hotel?" Maddow asked.

"At the Trump hotel," Parnas said.

Parnas also met with Trump in one of the hotel's luxury suites, at a "roundtable" organized by the pro-Trump super PAC America First Actions, according to people familiar with the meeting. Parnas is now facing federal campaign-finance charges, and emerged as a key witness against Trump in the days before Trump's impeachment trial begins.

If Giuliani was one of the most powerful Republicans in the lobby, then Hyde - the ex-Marine from Connecticut - was one of the least. But his story illustrates how the Trump hotel allows fringe characters to rise in influence, just by being in the right place.

Hyde is a Republican donor and long-shot congressional candidate who began hanging out at the hotel - along with other Trump properties - and posting photos of himself with GOP figures. He began to date Rabia Kazan, a onetime pro-Trump activist he met there.

"Trump is like a cult leader, and people go to the hotel to show their loyalty and love for him," Kazan said. Their relationship ended after several weeks, Kazan said.

In the past year, Hyde was involuntarily committed to a psychiatric hospital in Florida, and was hit with a restraining order in Washington for allegedly harassing a former business associate, according to court and police records.

Hyde sent Parnas texts saying that he had Marie Yovanovitch - then the U.S. ambassador to Ukraine and a perceived obstacle to Giuliani's plans - under surveillance in Kyiv. Hyde has since said he was joking.

Where did Parnas link up with somebody like that?

"At the Trump hotel," Parnas told Maddow. "He was a regular at the bar."