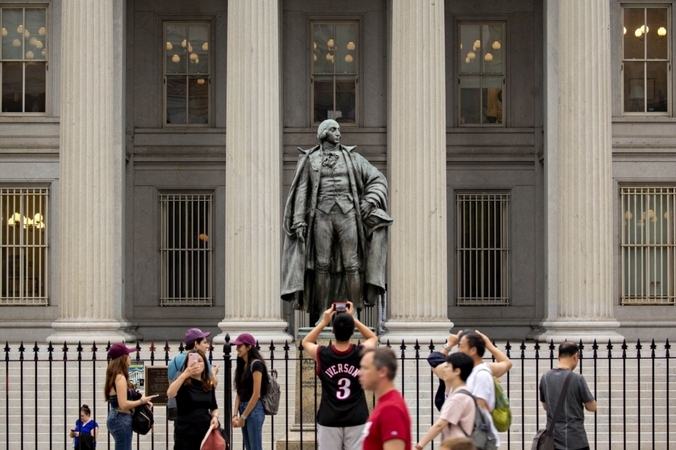 Visitors take photographs outside the U.S. Treasury building in Washington on Aug. 13, 2019. MUST CREDIT: Bloomberg photo by Andrew Harrer.

The U.S. Treasury will start issuing 20-year bonds in the first half of 2020, expanding its roster of securities as the government seeks ways to fund a ballooning deficit.

Institutional investors have been clamoring for more longer-dated, risk-free securities that offer some nominal yield, amid a global total of $11 trillion of debt with negative rates. Japanese officials have discussed adding a 50-year security, something the U.S. opted against in its announcement.

"The 20-year bond fits more easily into the existing market structure," said Lou Crandall, chief economist at Wrightson ICAP in New York. "This is a way of taking advantage of long-term interest rates that are low by historical standards without introducing a wild-card such as an ultra-long bond, which would have had more growing pains."

Previously issued 30-year Treasuries with about 20-years left to maturity yield about 2.15%, suggesting the new debt will offer a sizable premium over other comparable notes. Japanese 20-year bonds yield about 0.31%, and German ones just 0.07%.

The new 20-year bonds will probably draw more domestic buyers than global funds, who tend to favor shorter maturities. Foreign investors bought an average of less than 9% of U.S. 30-year debt sold at auctions in 2019.

More information will come in the Treasury's next quarterly announcement of sales of longer-dated debt, on Feb. 5, the department said in a statement. Given that the long-standing practice is to avoid a market-timing issuance strategy, the sales will be done "in a regular and predictable manner in benchmark size," the Treasury said.

"The newness of the bond should make it trade a little cheap," said Priya Misra, head of global rates strategy at TD Securities in New York. The yield curve is likely to steepen as the 20-year supply will be coming sooner than some had anticipated, she said.

Misra said she'll be looking to see which securities the Treasury will cut back on to make space for the new 20-year bonds. One danger is that, given the Federal Reserve's efforts to boost purchases of bills, there could be "scarcity" in some maturities, she said.

This is a revival for the 20-year bond, which the Treasury abandoned back in 1986 in favor of the 30-year security, long known as the benchmark "long bond" in the American market before it too was ditched for a time in the 2000s.

Treasury Secretary Steven Mnuchin said in the statement that "we will continue to evaluate other potential new products" to finance debt at the lowest cost over time.

The decision, made in consultation with dealers, comes after the U.S. reviewed options including ultra-long bonds maturing in 50 or 100 years. The current maximum is 30 years. Many on Wall Street lobbied against those longer durations.

Issuing extremely long-term debt would limit the cost to taxpayers of plugging a budget deficit that's headed to $1 trillion annually. Pension funds are also likely to enjoy a few extra points of returns amid falling yields.

"Lengthening duration as a borrower in the current very-low interest-rate environment is a sensible move," said Michael McCarthy, chief market strategist at CMC Markets Plc in Sydney. "It's the richest and deepest of markets around the globe. They are happy to take a long-run view to reshape their portfolio for the long term."

Among the risks of an ultra-long bond is the ebb and flow of demand over the course of an economic cycle. Buyers may be enthusiastic when yields are high, but in downturns, when the Fed is cutting rates, interest may evaporate, pushing government borrowing costs higher.

For now at least, demand is likely to be sustained, market participants said.

There's a large gap between the 10-year and 30-year bonds so "there will be demand for it," said Tony Farren, managing director at broker-dealer Mischler Financial in Stamford, Connecticut. It will appeal to "people that don't want to go all out to 30 years," he said.