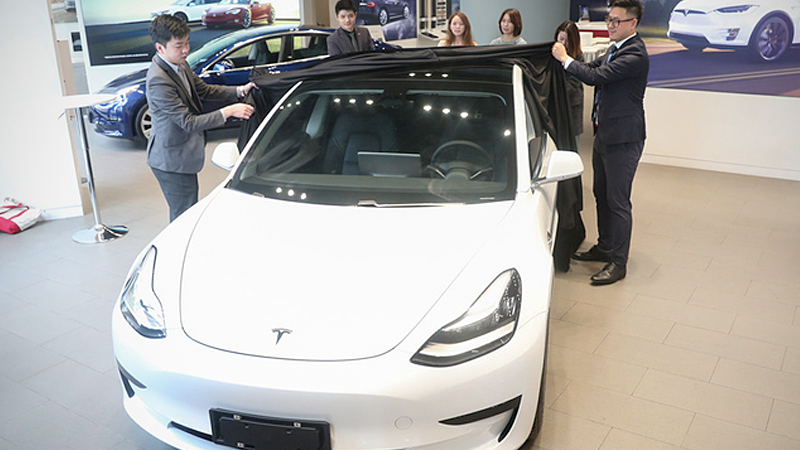 A Tesla Model 3 vehicle is seen at a Tesla store in Shanghai. [Photo/Xinhua]

The metropolis reported 3.82 trillion yuan ($553 billion) worth of economic output in 2019, up 6 percent year-on-year, the Shanghai Municipal Statistics Bureau said in a news conference on Tuesday.

Among them, the services sector jumped 8.2 percent to add about 2.78 trillion yuan, accounting for 72.7 percent of the city's GDP. The finance sector surged 11.6 percent year-on-year to 660 billion yuan, which is among the fastest-growing sectors.

The city dispelled global uncertainties to secure a large number of foreign direct investment deals. The number of newly attracted FDI contracts reached 6,800, up 21.5 percent from a year earlier, while contract value jumped 7.1 percent to $50.2 billion.

Investment from the United States' private sector exhibited strong momentum, with contract value climbing 1.3 times to reach $3.03 billion, whereas the actual use of foreign capital soared 29.6 percent from a year earlier to $603 million, said Tang Huihao, deputy chief of the bureau.

New economic activities such as internet-related services and technology startups were shaping up to be a major force driving economic growth. Online shopping hit 1.3 trillion yuan, up 27 percent year-on-year, whereas web-based transaction in the service sector jumped 26.2 percent, though detailed figures were not disclosed.

"From January to November last year, companies engaged in scientific research and technology services saw their revenue expand 12.4 percent from the same period in the previous year, and that of information software and services rose 10.3 percent," Tang said.

According to Tang, leading drivers in that sector include the new energy industry, which surged 17.7 percent, as well as biology-related industries, which expanded 7.3 percent, fueled by foreign pharmaceutical firms.

The per capita disposable income in Shanghai grew by 8.2 percent for urban residents and 9.3 percent for rural residents last year, with the latter recording faster growth than the former for eight consecutive years.

Shanghai's economy will continue to benefit from new opportunities like an expanded free trade zone, a science and technology bourse, the integration of the Yangtze River Delta region, as well as hosting the China International Import Expo, said Mayor Ying Yong on Monday at the close of the city's annual legislature meeting.

The city has just passed a regulation that bolsters its goal of constructing a world-class innovation hub through multiple means.