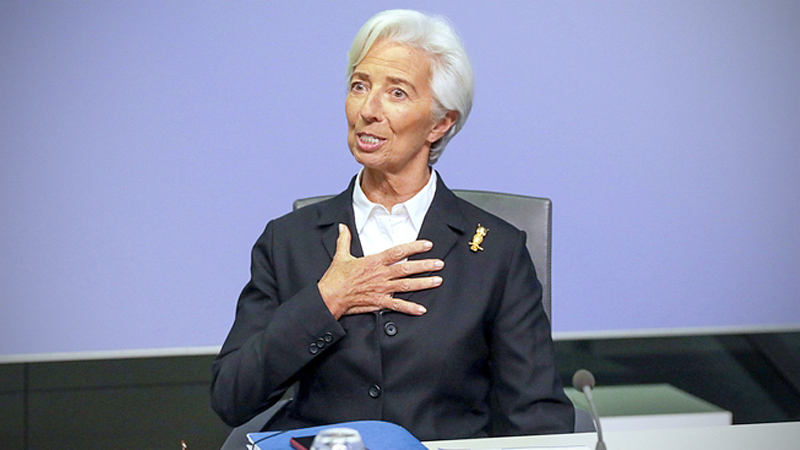 European Central Bank President Christine Lagarde signaled that all options are on the table for the institution's approach in reviving inflation as she launched the first reappraisal of its monetary policy since 2003.

"We are going to review a whole host of issues," she told reporters after the Governing Council meeting on Thursday. The exercise will encompass "how we deliver, how we measure, what tools we have and how we communicate."

Lagarde said the conclusions of the review should be communicated before the end of the year. She stressed that it will involve listening to the views of ordinary people, though differing from the approach of the Federal Reserve's "Fed Listens" events of last year.

While Lagarde noted signs of a "moderate increase in underlying inflation" -- a remark that briefly pushed the euro to a session high -- it remains well short of its goal of just under 2%. She also observed that downside risks to the ECB's economic outlook are "somewhat less pronounced."

Lagarde said monetary policy must remain highly accommodative, and reiterated that governments with the space to add fiscal stimulus should be prepared to do so.

Her efforts to modernize the ECB include potentially resetting the inflation goal, studying alternative measures of price growth, and assessing its policy tools. She's benefiting from signs that a deep manufacturing slump in the 19-nation economy is bottoming out before it causes greater harm to the labor market and consumer spending.

That should allow policymakers to focus on the review, which will last most of the year and also tackle issues including financial stability, climate change and communication.

"I would not exclude, preclude or anticipate how we're going to deliver," she said, adding that it would be unfair to reveal her own opinions just yet. "I do have my views as do other members. My mission is to harness all the views around."

The ECB is questioning its methods as globalization, digitalization and demographics challenge long-standing theories that inflation will pick up if you throw enough money at it. Negative interest rates and 2.6 trillion euros ($2.9 trillion) of asset purchases so far resulted in consumer-price growth barely above 1%.

Other economies haven't fared much better. Japanese inflation has been muted for a generation despite extremely accommodative policy. In the U.S., where fiscal policy has helped a little, the Federal Reserve is also appraising its strategy. Those results are expected to be released this year and may be inspiration for the ECB, which has already said it will take a page out of the Fed's book by listening to academics and members of civil society.

At the ECB's meeting, the 500th since the central bank was founded two decades ago, the Governing Council also decided to keep the deposit rate unchanged at -0.5% and the pace of monthly bond buying at 20 billion euros ($22 billion), in line with economists' expectations.

Policymakers reiterated their pledge that borrowing costs will remain at present or lower levels until the inflation outlook has "robustly" converged with their goal. Quantitative easing will "run for as long as necessary."

Economic prospects have improved lately. Trade tensions have eased with the signing of a preliminary U.S.-China trade deal, though U.S. President Donald Trump warned this week that threat of car tariffs still looms over the European Union, and confidence among businesses and investors has picked up.

Gauges tracking future output by euro-area factories and orders from abroad suggest the trend may last. Volkswagen AG, the world's biggest carmaker, saw global vehicle deliveries edg higher last year as it eked out a small gain in China and saw improved results in both Europe and South America.

The IMF's latest update, released this week on the sidelines of the World Economic Forum in Davos, noted that global risks are "less skewed" negatively.