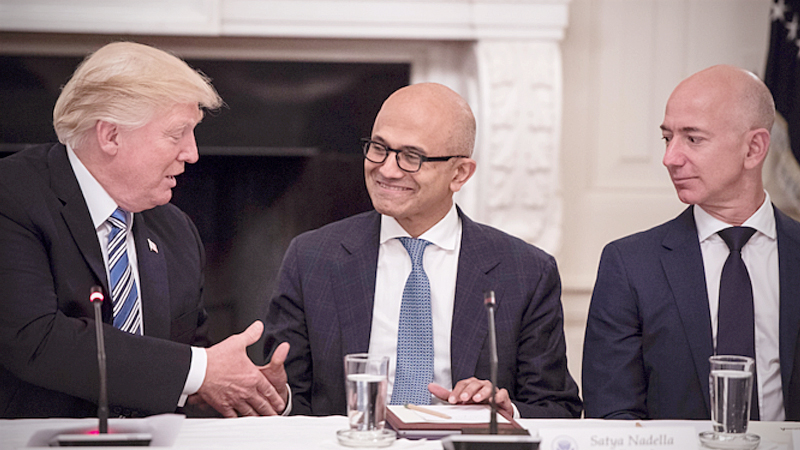 WASHINGTON - Amazon Web Services is seeking to force the Pentagon to halt work on a massive cloud-computing contract recently awarded to its biggest competitor, Microsoft, as it pursues allegations that President Donald Trump improperly meddled with defense funds to act on a grudge against Amazon founder Jeff Bezos.

The sealed motion was filed Wednesday as part of a bid protest in the U.S. Court of Federal Claims, which handles disputes over federal contracts.

In a statement, Amazon spokesman Drew Herdener said it is "common practice" to halt contract performance during a bid protest, and emphasized that his company supports the Defense Department's technology initiatives.

"It's important that the numerous evaluation errors and blatant political interference that impacted the JEDI award decision be reviewed," Herdener said in a statement. "AWS is absolutely committed to supporting the DoD's modernization efforts and to an expeditious legal process that resolves this matter as quickly as possible."

Defense officials have said in recent weeks that they plan to move forward with the JEDI project despite the bid protest. They have said that the award followed all laws and regulations, and have insisted the decision-making process that led to Microsoft's win was walled off from presidential influence.

"The Department of Defense will continue to fight to put this urgently-needed capability into the hands of our men and women in uniform as quickly and efficiently as possible," Rachel VanJohnson, a spokeswoman for Defense Department's cloud computing program office, said in an email.

"The department remains confident in the JEDI award," VanJohnson added. "Our team's duty and sole focus must remain on equipping our warfighters for an increasingly complex and challenging battlefield environment."

The Joint Enterprise Defense Infrastructure, known as JEDI, is meant to create a powerful, centralized computing system operated by a single technology company. Last October Microsoft was awarded a contract worth up to $10 billion for the system, jilting Amazon, the cloud-computing market leader.

The award to Microsoft came soon after a high-profile intervention by Trump, who said he was acting on complaints from Amazon's competitors. At issue in the case is whether the commander in chief's involvement skewed the competition in Microsoft's favor.

In its bid protest, Amazon pointed to what it called "unmistakable bias" and "political influence" in the government decision-making process that led to Microsoft's win.

The company's case has so far relied primarily on the president's own public statements, including a February 2016 campaign rally in which he said Amazon would "have problems" if he were elected, citing Bezos's ownership of The Washington Post.

Amazon's protest is the fourth legal challenge the JEDI contract has faced; earlier ones caused the project to be delayed for more than a year while officials investigated various allegations against Amazon.

Amazon had long been considered the front-runner for the massive contract; it is the market leader and it remains the only company that can handle top-secret data. Many of Amazon's advantages stem from a 2013 contract award that made it CIA's primary cloud provider.

Software giant Oracle, which also wanted the contract but was eliminated in an earlier phase of the competition, protested the award long before bids were even submitted, assuming Amazon to be the front-runner. The company carried out a long-running campaign seeking to paint JEDI as a conspiracy by Amazon to set up a "ten-year DoD cloud monopoly," as Oracle put it in one lobbying document.

In late July, the president said in a televised news conference that he had received "tremendous complaints" about the contract from Amazon's competitors, specifically citing Oracle, Microsoft and IBM.

"Some of the greatest companies in the world are complaining about it, having to do with Amazon and the Department of Defense, and I will be asking them to look at it very closely to see what's going on," Trump said of the JEDI contract.

Soon afterward, he retweeted a link to a Fox News segment that called the contract the "Bezos Bailout."

He separately asked Secretary of Defense Mark Esper to reexamine the Pentagon's approach to the JEDI contract, citing concerns that the contract would go to Amazon, people familiar with the matter told The Post at the time.

Defense officials have said the decision-making process was walled off from the White House and followed all relevant laws and regulations. Dana Deasy, the Department of Defense chief information officer, said in a recent congressional hearing that there was a two-tracked process in which the officials who evaluated bids from Amazon and Microsoft were not in touch with the White House.

"I feel very confident that at no time were team members that actually took the source selection were influenced with any external, including the White House," Deasy said, referring to an anonymous team of 50 cloud technology experts who evaluated bids.

In statements to the press, Defense Department spokespeople have emphasized that the president did not "order" the Pentagon to make any specific determinationleading up to the Microsoft award.