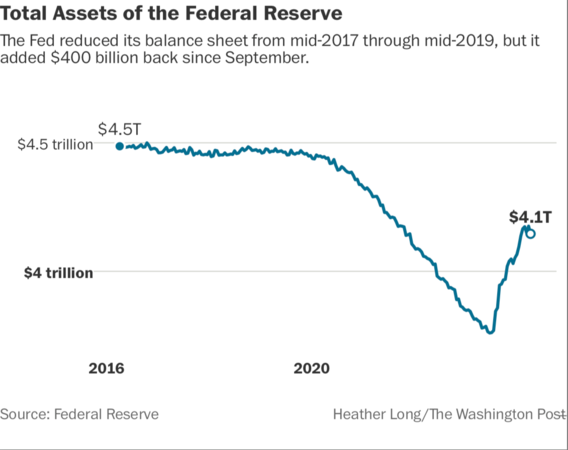 The Federal Reserve left interest rates unchanged Wednesday, a widely expected move as the U.S. economy continues to grow at a slow and steady pace.

The interest rate remains in a range of 1.5 to 1.75%, a low level by historical standards that is meant to give a modest boost to the economy by encouraging more lending and home buying. The Fed lowered interest rates three times last year, taking the rate down from a post-recession high of nearly 2.5%.

Interest rates are at an "appropriate" level the Fed concluded, but it said it will "monitor" ongoing issues at home and abroad.

Fed officials have been closely monitoring the impact of the trade war on the economy and there are new concerns about the deadly coronavirus in China and what that might mean to global supply chains, among other things.

Fears of a U.S. recession this year have largely faded since the Fed began cutting rates in July. Trump's partial trade deal with China has also helped calm anxieties on Wall Street and among business leaders. On top of that, the Fed has been buying a substantial amount Treasury Bills since September, which some argue has propped up the stock market. The S&P 500 stock market index has risen about 10% since the Fed made a special announcement in October that it would buy more T-bills. Fed leaders insist these are merely technical adjustment to the central bank's plumbing.

The Fed painted a mostly upbeat picture of the U.S. economy in a statement Wednesday, saying the economy is growing at a "moderate rate," and the job market remains "strong." But the Fed notably downgraded the language it uses to describe consumer spending, which accounts for 70% of the economy.

"Household spending has been rising at a moderate pace," the Fed said Wednesday. Last year the Fed describe consumer spending as "strong."

Fed leaders do not anticipate moving interest rates up or down at all in 2020, but Wall Street is currently predicting at least one cut, likely in July or September. Fed Chair Powell has said it would take a "material reassessment" of the economy's health for the central bank to alter rates.

"The Fed is on standby, rather than on hold, which is a subtle but important difference," said Axel Weber, chair of UBS bank and former head of Germany's central bank, at the World Economic Forum last week.

Beyond interest rates, many investors are paying close attention to the Powell's plans for the Fed's balance sheet.

By 2017, the Fed held about $4.5 trillion in assets - mostly U.S. government bonds and mortgage-backed securities - as part of its efforts to stimulate the economy and keep interest rates low. But the Fed shed roughly $700 billion from mid-2017 through mid-2019. Banks grew worried that there was not enough liquidity in the system, especially cash "reserves" on hand at the Fed.

Since September, the Fed has bought about $400 billion worth of short-term Treasury bills to ensure there is enough money in the system to keep overnight borrowing rates for banks where the Fed wants them. Powell has indicated the central bank will continue pumping liquidity into the system "at least" through the second quarter, but he has not given much clarity around how many reserves he thinks the system needs or how the Fed will ween the market off this additional safety net.

"Our Treasury bill purchases should not be confused with the large-scale asset purchase programs that we deployed after the financial crisis," Powell said in October.

The Fed's statement Wednesday did not provide any clarify on plans for the balance sheet.

"This is tricky terrain for Powell and if mishandled could be disruptive," wrote Krishna Guha, vice chair of Evercore ISI research in a note to clients this week.