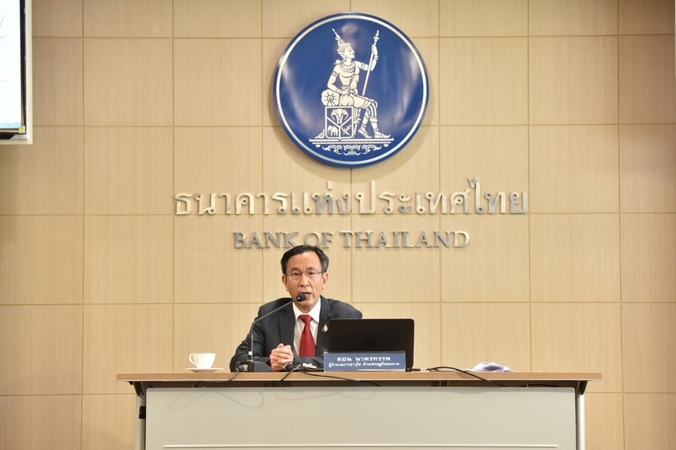 The Bank of Thailand said on Friday (January 31) that the economy showed slight improvement in December.

Its report on Economic and Monetary Conditions for December and the fourth quarter of 2019 said the value of merchandise exports, manufacturing production, private investment indicators and public spending contracted at a slower rate, while private consumption indicators expanded at a pace close to that of the previous month.

Tourism growth was also slower despite the adverse effects of the tour boat tragedy in Phuket abating.

Headline inflation edged up from the previous month, mainly due to slower contraction in energy prices. The seasonally adjusted unemployment rate was unchanged, whereas employment rose in the non-agricultural sectors.

The current account continued to record a surplus. The capital and financial accounts posted deficits from both asset and liability positions.

Details are as follows:

The value of merchandise exports contracted by 1.7 per cent from the same period last year. This was the lower rate from 7.7 per cent in the previous month because –

•    Exports of petroleum-related products contracted at a lower rate due to some oil refineries resuming normal operations after temporary shutdowns, coupled with an increase in global crude oil prices.

•    Exports of electrical appliances and hard disk drive turned into expansion thanks to the relocation of production base to Thailand in the previous periods.

•    Exports of other electronic parts expanded in line with a clearer recovery sign of the electronic cycle.

As a consequence of improved merchandise exports, manufacturing production contracted at a slower pace.

Private investment indicators contracted less than the same period last year. Investment in machinery and equipment did so since imports of capital goods began rising.

However, domestic machinery sales and the number of newly registered motor vehicles continued to fall significantly.

Private consumption indicators expanded at a pace close to that of the previous month. Spending on services accelerated due to benefits from the government’s tourism stimuli and the longer holidays in December.

Spending on durable goods continued to contract in vehicle sales, in line with softening non-farm income and consumer confidence, together with financial institutions’ tightening of credit standards for consumer loans after credit quality deteriorated.

The value of merchandise imports was up by 1.8 per cent from the same period last year, improving in almost all categories, particularly turbo-jets and parts, telecommunication equipment, fuel and garments and jewellery and a rise in the global crude oil price.

Foreign tourist arrivals expanded by 2.5 per cent, attributable to visa-on-arrival fees being waived, which encouraged more visitors from China, India and Taiwan, together with rising interest from Laos, Japan, South Korea and Russia.