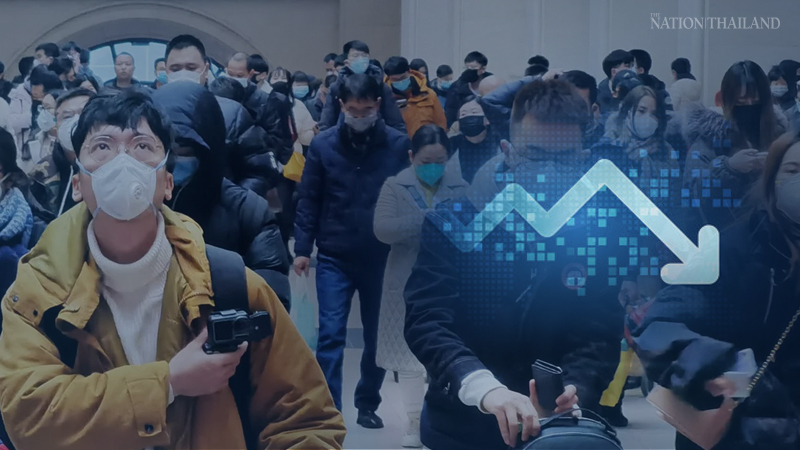 CIVITA DI BAGNOREGIO, Italy - The village is 2,500 years old, perched on a sheer hilltop, rising into the sky like a storybook illustration. A little more than a decade ago, it was on the verge of extinction. It's survived with the help of the world's most powerful tourism force: a flood of Chinese visitors.

"It's become like a Chinatown," said Fabrizio Rocchi, a restaurateur in the village, which has a full-time population of eight people and typically hosts seven or eight tour buses per day, more than 100,000 people in a year.

The past week, though, has offered a vision of a daunting alternative reality.

To contain the spread of coronavirus, China has suspended all outbound tour groups. International airlines have cut back on or suspended routes. A handful of countries, including Italy, have closed themselves off entirely to air traffic from China.

And so, after years of racing to accommodate Chinese visitors and growing reliant on their spending, tourist destinations large and small are starting to feel what happens when the world's most populous country hunkers down and stays home.

Of course, part of why a virus that originated in Wuhan, China, has shown up in so many places around the world is because Chinese have become such avid travelers. They constitute more than 10% of the global tourism industry and the fastest-growing market for long-haul flights. During the 2003 SARS outbreak, some 20 million Chinese went abroad every year; in 2018, that number was 150 million.

The most popular destinations are in Northeast and Southeast Asia, according to Chinese government figures. Chinese still make up only a fraction of Europe's overall visitors. But, more and more, they're visiting niche destinations on the continent - not just the Colosseum and the Louvre, but French towns famed for particular wines and cheese, and picturesque Italian villages that make for the perfect social media backdrop.

"Chinese tourism is in total evolution," said Alberto Corti, the director of Confturismo, Italy's main tourism association. "We think of the bus tours, people only eating Chinese food - yes, it exists. But the number of tours is decreasing, and the number of individual travelers is increasing. The average age is going down."

And when abroad, an ascendant Chinese middle class spends money in a way few other tourists do. In Paris, the average Chinese tourist spends 60% more than those from other destinations, according to data collected by Paris's regional tourism board and shared with Reuters. In Italy, Chinese travelers account for nearly 30% of tax free shopping.

Except now, suddenly, coronavirus has brought all that to a halt.

At the grand department stores of Paris and the luxury flagships of Rome, specially hired Mandarin-speaking employees are finding fewer customers to greet. The museums and monuments of the Italian capital are still mobbed by tourists, but at the famed Trevi Fountain on a recent afternoon, there was only one tour group - from Taiwan.

Hotels and travel agencies catering to Chinese have seen what one employee in Rome called a "bloodbath" of cancellations, affecting everywhere from Swiss ski resorts, which had been expecting to fill ski school classes taught in Madarin, to Trier, Germany, the birth place of Karl Marx.

Corti said hotels and other businesses stand to lose hundreds of millions of euros - a number that will grow if the travel restrictions carry into the spring and summer.

"In a while, we might have to [temporarily] shutter too," said Jin Lili, the operator of a Rome-based travel agency that works with Chinese customers. "There is no work."

In Italy's Civita di Bagnoregio, the last trickle of tours have been coming through, with people who started their travels before the virus exploded. And even some of those groups are smaller than they would have been, because of travelers who were unable to leave China as the virus began to spread.

"We were supposed to be 20 people. Instead, we're 10," said Han Hui, 30, a painter from Hainan, who was wandering past the village's vine-covered stone homes.

Chinese visitors still in Europe say they feel they're being viewed with trepidation. There have been a handful of cases of blatant xenophobia - jeering on trains or public buses, for instance. But the more common scenario comes in hotel lines, where other visitors keep their distance, or in restaurants, where even healthy Chinese feel like they'll be stared at if they let out a cough.

Only three cases of coronavirus have been identified in Italy. Two Chinese tourists who had been staying in Rome tested positive, as did one Italian who had been evacuated from Wuhan, China.

This past week, one tourist in Civita di Bagnoregio hesitated before walking into a perfume shop, uncertain whether she would be welcomed.

"Is it okay to enter?" the tourist asked, explaining where she was from.

"You can come in, don't worry," said the employee, Gessica Cirica, who has taught herself to speak a few words of Mandarin and Cantonese, as well as Japanese.

Amid the outbreak, others in the village have wondered whether it was risky to have Chinese visitors. The town's mayor, Luca Profili, said there had been "clearly a bit of worry," given that some days Chinese account for 90% of foreign tourists.

"Some were asking if I'd take action," Profili said. "Once [the Italian government] shut down flights, everybody felt more at ease."

Any reassurance about the chances of the virus making its way here, though, is counterbalanced by unease about what the drop in visitors might mean for the local economy.

Among the places that had been lifted by the wave of Chinese tourism, Civita di Bangnoregio is among the most unlikely. It's a two-hour drive from Rome, accessible only by footbridge, and, until a decade ago, it was just one of Italy's crumbling, evocative hilltop towns.

But the village worked to promote itself as a precarious, endangered treasure. The town also had the fortune of resembling a dreamy world depicted in a Hayao Miyazaki anime film, "Laputa: Castle in the Sky."

The village charges a five-euro entrance fee for visitors crossing the bridge. It has used the money for renovations, to provide access to people with disabilities and to update public restrooms. Some people who'd left the town came back to turn their homes into bed-and-breakfasts. Restaurants added tables and saw the number of visitors grow year-by-year. Last year, Chinese accounted for more than one-quarter of foreign visitors.

This past week, the remaining flow of Chinese visitors was still enough to fill several tables at one of the village's restaurants. The owner, Arianna Bastoni, said tourism has benefited her family and her business. But the equation was less complicated before the virus. If Chinese tourists stopped coming, she'd lose money. She'd also feel temporarily more secure until the virus runs its course.

"Of course we are happy when they bring us work," Bastoni said. "[But] there is a bit of fear."