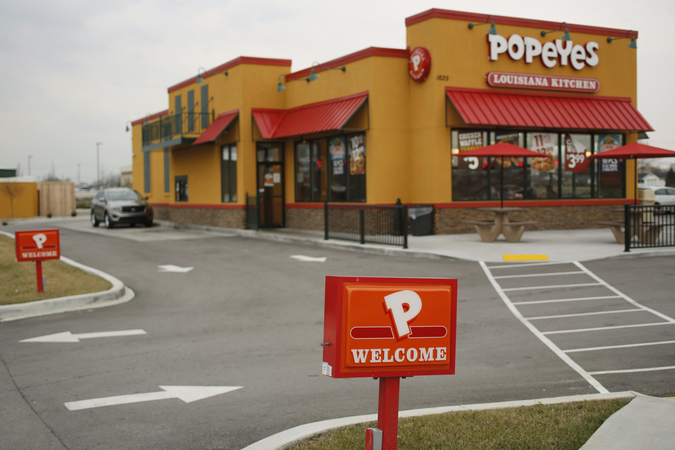 Popeyes same-store sales soared 34% in the the fourth quarter, more than double the 15% gain analysts had predicted, according to Consensus Metrix. The brand's business in the U.S. catapulted after it introduced a new chicken sandwich last year. It sold out in the summer, and was brought back in November chainwide.

The "chicken sandwich has proven to be a game changer for the brand in every way," Restaurant Brands Chief Executive Officer Jose Cil said in a statement.

The shares rose as much as 3.6% to $66.17 in New York Monday. The stock was little changed this year through Friday's close, after gaining 22% last year.

While Burger King's same-store sales rose 2.8%, the result was shy of projections for 3.4% growth. Like Popeyes, the burger chain is having success in the U.S. with new fare, including the much-hyped Impossible Whopper, and plans to expand the line further this year. But faux meat competition is building as other chains, including McDonald's Corp., add Impossible Foods Inc. or Beyond Meat Inc. items.

Tim Hortons, where Restaurant Brands gets about 60% of its revenue, continues to struggle in its home market of Canada. The chain has failed to pull in diners with its lunch offerings, as well as cold coffees, amid steep fast-food and cafe competition. Comparable sales declined 4.3% last quarter, a bigger drop than analysts' estimated.

Restaurant Brands has big growth plans in China for Popeyes, and Cil said on a conference call Monday that there is "massive potential" for the brand there.

Cil said it's too early to say what impact the deadly coronavirus will have on Restaurant Brands' business, and that Burger King China accounted for about 2% of systemwide sales in 2019. The immediate focus is on the health and well-being of its partners and customers, he said. In August, the company said there were about 1,000 Burger King restaurants in China.

Rivals including McDonald's and Yum China Holdings Inc. have closed locations in China.