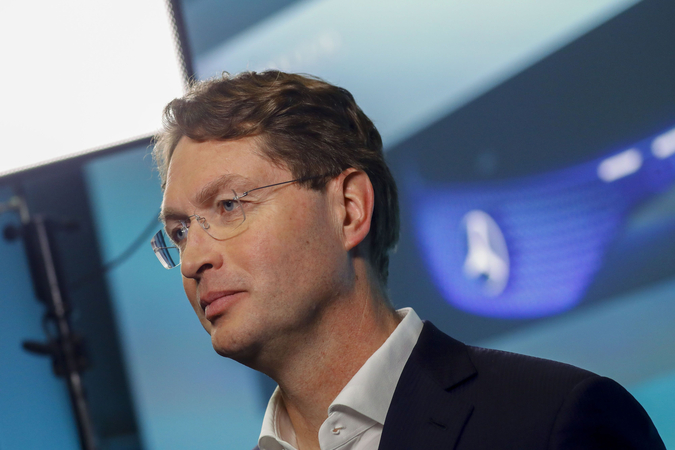 Ola Kallenius got off to a shaky start at the helm of Daimler, presiding over three profit warnings since last May as legal costs, tariff threats and swollen development spending marred his coronation after he took over from longtime boss Dieter Zetsche.

The new chief executive officer sought to draw a line under the turbulent period at the German luxury-car maker on Tuesday when he tempered a drastic cut in the dividend with the promise of a brighter year ahead.

The 50-year-old executive vowed to deliver "significantly" higher profit by squeezing out costs and capping investments, while committing to a more decisive push into electric cars. Daimler will also review non-core operations to channel more money into automaking.

"This company is going to change fundamentally," Kallenius told investors near Daimler's home base in Stuttgart, Germany. While it won't be easy, "we will work 24/7 to make this happen, to make this somewhat of a turning point."

Investors drove the shares up as much as 4% on the earnings optimism before retreating as the session wore on. The stock was down 0.4% to 42.88 euros at 2:12 p.m. in Frankfurt.

"The tone from CEO Kallenius was uncompromising, suggesting a united and concerted effort to turn Daimler around," Redburn analyst Timm Schulze-Melander said in a note. "However, a quick top-down glance suggests things may be far from straightforward."

Nine months into the job, the Swedish executive has struggled to make headway on a planned restructuring push. Earnings before interest and taxes slumped by 61% in 2019, hampered by production hiccups and ballooning expenses to fix diesel vehicles.

The problems aren't going away. Fresh allegations of diesel-cheating, years after the scandal broke at competitor Volkswagen, have burdened Daimler with mounting recall and legal costs. And the company, which was slower than VW to electrify its fleet, now faces rising competition from Tesla Inc., which plans to build a factory outside Berlin.

With a market value of about 46 billion euros ($50 billion), Daimler is worth less than half of the much-smaller Tesla, and is the worst performer on Germany's benchmark DAX index this year.

Still, there is cause for optimism, according to Harald Hendrikse, an analyst with Morgan Stanley. Daimler should see a trough in profit margins this year, and he's confident free cash flow bottomed in 2019 given the newfound investment discipline and the two-thirds drop in the dividend, which brought the payout to its lowest point since 2010, when it was eliminated in the wake of the the global financial crisis.

"Management is improving the decision-making," Hendrikse said. "Daimler metrics should improve from here."

While Kallenius expects the efficiency measures to unleash a turnaround, the CEO faces outside obstacles to contend with as well -- everything from the persistent threat of higher tariffs to the coronavirus outbreak in its largest market, China.

The profit rebound will be slowed by restructuring costs totaling about 2 billion euros through 2022, according to Chief Financial Officer Harald Wilhelm. And luxury unit Mercedes-Benz has a challenge meeting stricter European Union emission tests that come with the threat of hefty fines, Kallenius said.

"I cannot guarantee" that Mercedes-Benz will comply with EU emission rules, "but we should be within striking distance," Kallenius said.

Job cuts are a critical component of Kallenius's effort to make the manufacturer leaner. While Daimler didn't detail any new personnel changes, the carmaker said last year it would eliminate more than 10,000 positions worldwide, using voluntary measures such as early retirement and attrition. On Tuesday, Kallenius said the savings on labor will top 1.4 billion euros ($1.5 billion) by 2022.

He also said that while the heavy-trucks division remains a core business, a new group structure introduced last year keeps Daimler's options open should the management board change its mind in the future about deeper structural changes within its organization.

Alongside moves to rein in spending, Kallenius has outlined plans to introduce more than 20 new plug-in hybrid and fully-electric Mercedes cars by 2022.

Mercedes-Benz will unveil a fresh iteration of its S-Class flagship sedan this year and roll out the EQA, a compact electric SUV that will flank the slightly larger EQC and the EQV minivan. The brand plans to quadruple the share of plug-in hybrids and fully electric vehicles in its deliveries this year, the company said.

It's a big list, and for many investors, the case is the CEO's to prove.

"Self-help measures are only expected to slowly improve profitability," said Marc-Rene Tonn, an analyst with Warburg Research. "We would like to see some evidence that the targeted improvements will ultimately be sufficient to lift earnings before granting early praise for the measures."