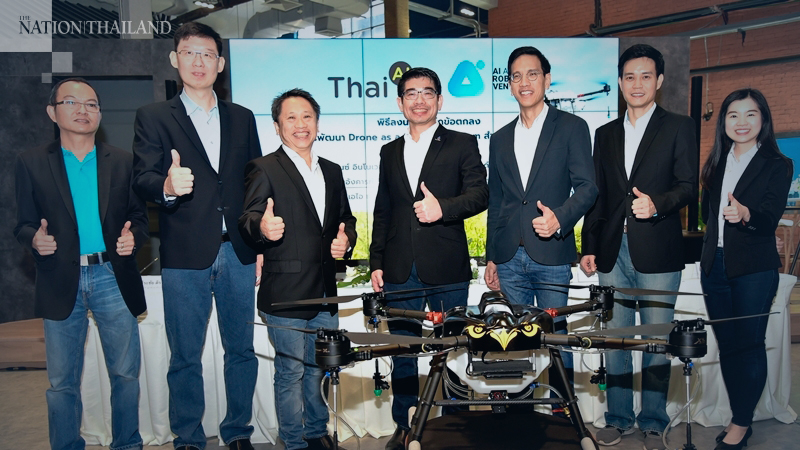 ARV and Thaicom executives last November announced an agreement to cooperate in developing cost-effective and easy-to-use drone technology for agriculture.

AI and Robotics Ventures Company Limited (ARV), a subsidiary of PTT Exploration and Production (PTTEP), is set to establish a joint venture with satellite operator Thaicom in the next quarter to develop cost-effective and easy-to-use drone technology for agriculture.

Both entered into an agreement in November.

While declining to elaborate, ARV general manager Thana Slanvetpan said the joint venture would tap companies in the agricultural industry.

The move will also help boost growth in the farm sector, which accounts for 10 per cent of the country’s gross domestic product.

ARV will develop various kinds of robots to serve in petroleum exploration and production and in the energy segment.

Thana said his firm will next month begin the commercial production of an Inspection-class Autonomous Underwater Vehicle (IAUV) that can scrutinise underwater pipelines and oil rig structures.

In the second or third quarter this year, the company will begin commercial production of the Subsea Flowline Control and Repair Robot (SFCR) and conduct trial runs.

This remotely controlled robot was developed in collaboration with a Norwegian startup.

Thana said the company aims to be not only a leader in the robot and AI technology field in Thailand but also in Southeast Asia.

ARV set a budget of Bt1.6 billion for investment in 2019-2021, of which US$10 million was spent last year. ARV’s workforce is expected to rise to 38 by the end of this year from the current 24, in line with its business expansion.