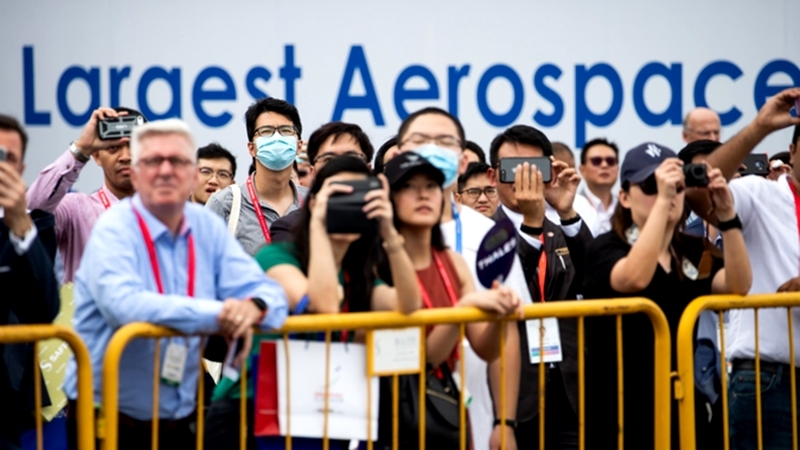 The giants of aviation left the Singapore Airshow with little to brag about, but someone ended up with one of the hottest deals in town: a couple of boxes of hand sanitizers.

Alarm over the novel coronavirus outbreak has led to panic-buying of unlikely hot commodities, from toilet paper and instant noodles to soap and even condoms, which people have been using as makeshift finger protectors -- safe texts and all that. Bosses at one U.S. aerospace company were befuddled when they arrived at their corporate booth Thursday morning to find it had been liberated of hand sanitizers. Everything else -- aircraft models, television sets and branded coat pins -- was left untouched.

The priorities at Asia's flagship aviation event were a far cry from normal. Many companies didn't even show up because of concern over the virus, which has infected more than 60,000 people and killed 1,380, primarily in China. Attendance was thin and the executives who did attend headed for the door soon after finishing their meetings. The organizers advised attendees to avoid hand contact, leading to awkward greetings and elbow bumps.

Boeing, which is bedeviled with the 737 Max grounding and failed to sign any orders at all in January, didn't announce any deals. Neither did Airbus, beyond its helicopter unit selling some trainer aircraft to the Thai military. A highlight of the show was PNG Air ordering three ATR 42-600S aircraft. Last year's Paris Air Show heralded 610 commitments for new planes between Boeing and Airbus alone. A year earlier in Farnborough, England, there were almost 1,000 orders worth $141 billion.

By Thursday afternoon, the third day of the Singapore show, many company booths were empty. Some had closed shop after the first day. There was hardly a soul at the static display area. Even pilots, who tend to enthusiastically show off private jets to the ultra-rich at air shows, were nowhere to be found. At least one company said executives who came to the event from overseas will have to go through self-quarantine upon their return.

The organizers of the Singapore Airshow didn't immediately respond to requests for comment on the event.

The signs were ominous before the show began, with Singapore raising its disease response level to second-highest, prompting companies such as F-35 fighter-jet maker Lockheed Martin and Commercial Aircraft Corp. of China to pull out from the event. The news of several coronavirus cases in Europe being linked to a British man who attended a business meeting at Singapore's Grand Hyatt hotel last month added to the gloom.

From the events that took place, Boeing's 737 Max dominated conversations. The global grounding of the single-aisle plane following two crashes has cost the U.S. plane manufacturer an estimated $18.6 billion. There's still no real clarity on when it will fly again, and that's hurting suppliers such as United Technologies Corp. and Spirit AeroSystems Holdings Inc., which has slashed its dividend and laid off 2,800 employees.

Boeing said it will take several quarters to return the 737 Max to the skies globally, which means about 700 of the jets are stuck on the tarmac. The company plans to resume production of the aircraft before regulators give it the green light to get back in the air. Budget carrier SpiceJet Ltd. said at the air show that Boeing will bear the expenses of setting up a simulator in India.

One of the biggest beneficiaries of the Max crisis, at least on paper, is Airbus. The European planemaker said it expects 1,000 orders in the next 10 years for its A321XLR jet, the newest and longest range model of its best-selling A320 family. Boeing is considering a new aircraft that may potentially compete with the latest Airbus.

Even Airbus's announcement this week for an outline agreement to sell 50 A220 planes was made in London rather than Singapore. Most executives had left the show by that time anyway, and taxi drivers were offering discounts for rides back to the center of the city.