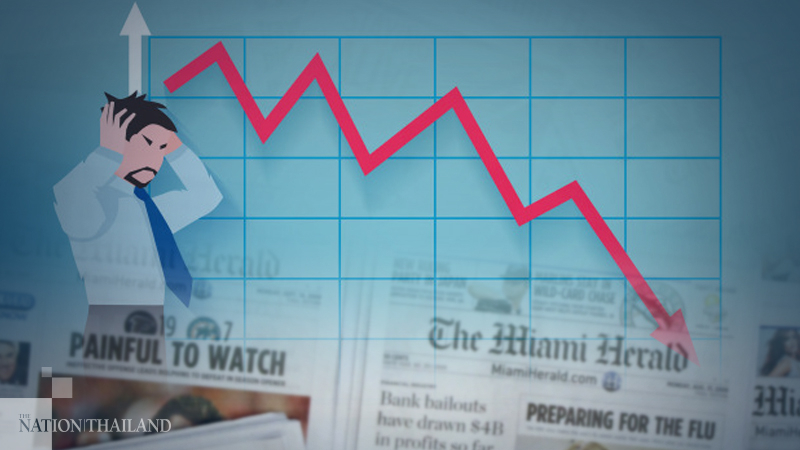 Bankruptcy may have been inevitable for the newspaper chain McClatchy ever since its ill-fated decision to borrow heavily in 2006 to buy another chain, Knight Ridder, for $4.5 billion.

Shortly afterwards both the national economy and the print news industry collapsed, and the latter has never recovered.

A decade of cost-cutting and efforts at growing new digital revenue wasn't enough to change the company's fortunes. A series of more recent, behind-the-scenes transactions on Wall Street shaped a new path for the 163-year-old owner of the Miami Herald, the Charlotte Observer and 28 other newspapers across the country.

In its press release announcing its filing for Chapter 11 bankruptcy Thursday, Sacramento, California-based McClatchy said it would continue operating as it seeks relief from its debt and pension obligations in the hope of quickly emerging as a privately held company.

McClatchy's announcement does not name who its new controlling owner would be, the hedge fund Chatham Asset Management, referring instead to Chatham as its largest secured creditor.

But details in hundreds of pages of documents associated with the filing show how Chatham used a series of financial transactions to exert increasing control over the company, to the point where it partnered with McClatchy on a bankruptcy plan that, if finalized and approved by the court, would hand control of the company to the hedge fund.

In a sign of possible complications to come, the federal Pension Benefit Guaranty Corp. raised concerns in a bankruptcy filing Friday about a 2018 financial transaction between Chatham and McClatchy and asked the court to investigate. The filing was first reported by McClatchy's Washington bureau.

McClatchy, led by President and Chief Executive Craig Forman, has been seeking a bailout of its $530 million pension obligations with the federal agency, which steps in to pay benefits to employees with failing private sector retirement plans.

In the bankruptcy filings, McClatchy's management outlines the extremes it has gone to in order to get out from under the debt it took on buying Knight-Ridder at the same time that its century-old business model was falling out from beneath it.

From the 2006 acquisition to 2018, McClatchy cut its operating expenses by nearly 60%. By mid-2019, it had cut 82% of full-time workforce from the time of the deal -- shedding reporters, editors, photographers and other staffers across the country -- going from 15,378 to 2,800. At the same time, advertising revenues fell by 80% and total daily print circulation fell 59%.

In a mark of the divergent fortunes of regional papers and national titles such as the New York Times - which now has 5 million digital subscribers - McClatchy continued to scrap for any cost savings it could find all last year.

It saved an additional $41 million through another round of staff reductions. In February of last year, it offered an early retirement plans to 450 employees. It centralized advertising operations and continued to outsource printing to third parties. It sold commercial real estate in Miami and Kansas City, home to the Herald and the Kansas City Star.

The company also increased its number of digital-only subscribers to 220,000, more than double what it was two years ago, in an attempt to mimic some of the success that the Times, Wall Street Journal and The Washington Post have found online.

It wasn't enough. McClatchy still has $703 million of outstanding debt, much of it the result of bad business decisions.

"Newspapers are obviously in trouble but there is $700 million in debt and only $14 million of that is to vendors," said Eric Snyder, chairman of the bankruptcy department at Wilk Auslander. "They're doing what they're doing because lenders piled debt on this company and they're not getting paid."

To keep its earlier creditors at bay, McClatchy had to find new lenders, and last year it found a willing partner in New Jersey-based Chatham, which inked a deal that set McClatchy's proposed reorganization into motion.

Chatham, which reported $4.4 billion in assets in 2019, isn't a stranger to the news business but its reputation has not won accolades among McClatchy supporters and employees.

Chatham founder Anthony Melchiorre has been referred to as a "bare-knuckled fighter in business dealings" who "has waded deeper into contrarian bets over the years and stuck by them," according to industry publication Pensions & Investments.

In March of last year McClatchy agreed to borrow newly from Chatham to stave off debts to other lenders, according to the filings. McClatchy then agreed to allow Chatham to convert some of its "unsecured" debt to "secured" debt, giving it a leg up on other creditors in the bankruptcy process. Chatham also owns 23.7% of the company's stock.

In its bankruptcy announcement, McClatchy said that it had reached agreement with Chatham on a series of transactions that would take the company private. Kevin McClatchy, chairman of McClatchy's board and great-great grandson of the company's founder, said in the statement that turning his family owned company over was "a necessary and positive step forward for the business."

But a number of hurdles remain. In its announcement, McClatchy briefly noted what may be a disagreement over how the company will be managed going forward, as the parties "continue to negotiate the final details surrounding governance and senior management."

At AMI, Chatham took two of four board seats and other hedge funds have been more aggressive about taking board seats at declining newspaper companies - positions that journalists or former journalists once filled previously. The newly formed Gannett, backed by investments from private equity giants Fortress Investment Group and Apollo Global Management, has a nine-member board with no journalists.

The bankruptcy judge might take issue with Chatham's maneuvering ahead of other creditors, Snyder said, in addition to consideration of some 22,000 pension holders. He did not expect the plan to go through as proposed.

"I think the court is going to want to see more about how the PBGC claims are going to be treated and see what McClatchy is going to receive in exchange for allowing Chatham to convert that debt," he said.

In the meantime, McClatchy is taking out even more debt - a $50 million revolving credit facility - to cover the company's costs through the bankruptcy process, according to the filings.