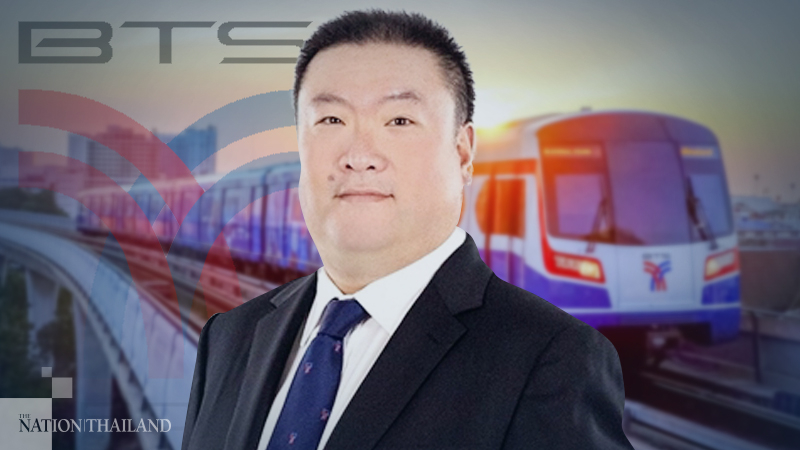 BTS Group Holdings Pcl (BTS Group) posted a 107 per cent growth year on year (YoY) in net profits in the third quarter of fiscal year 2019-20, the company said in a statement.

BTS Group earned a net profit of Bt2.46 billion, mainly through improved performances in its mass transit and media businesses as well as a higher share of net profit from its associate, U City Pcl, and gains of Bt1.118 million from the sale of land in Mo Chit. 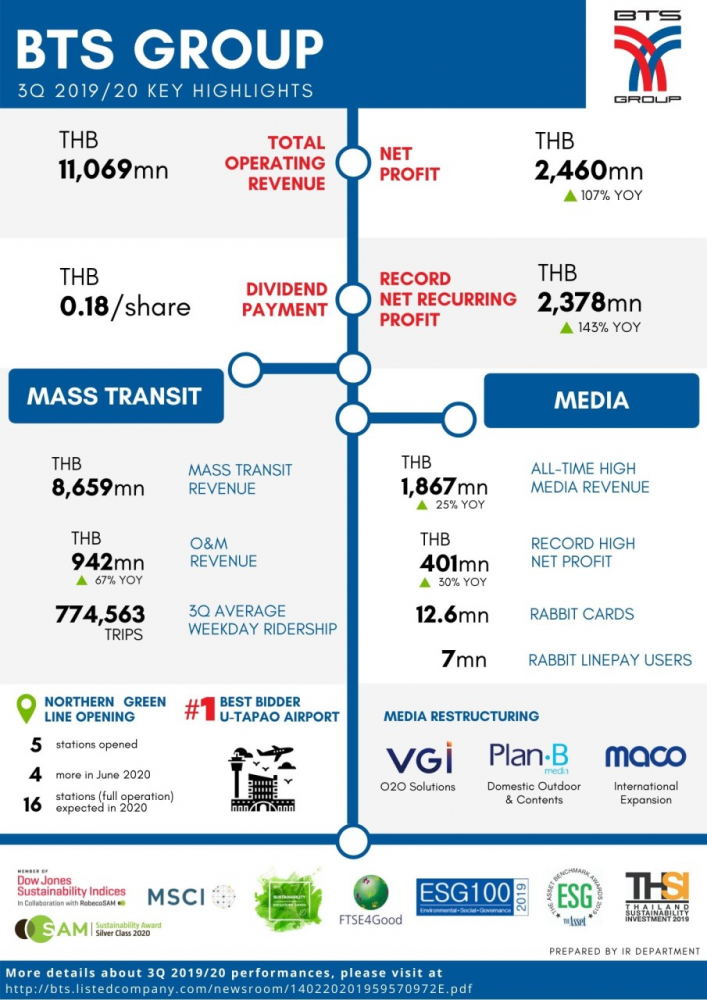 The recurring net profit also soared by 143 per cent YoY to Bt2.37 billion, the company said.

In the third quarter of fiscal 2019-20, total operating revenue was Bt11 billion. The mass transit business was the main contributor, accounting for 78 per cent of revenue. Operating and maintenance (O&M) revenue rose by 67 per cent YoY to Bt942 million, principally driven by the opening of the Southern Green Line extension (Bearing-Kheha) in December 2018.

On the media side, VGI Group again achieved the highest quarterly revenue and net profit. VGI reported a 25 per cent increase in quarterly revenue of Bt1.867 billion, an all-time high, largely driven by the growth in all media segments, as well as additional revenue from online advertising, under VGI Digital Lab. This was also reflected in VGI’s net profit, which expanded by 30 per cent YoY to Bt401 million.

BTS Group’s rail mass transit network expansion continues, with significant progress on the Northern Green Line expansion. Ha Yaek Lat Prao station opened in August 2019 and four additional stations commenced operations on December 4, 2019, the company said. Four more stations are expected to open in June 2020 and full operation of the Northern Green Line extension (with a total of 16 stations) is anticipated by this year. These recently opened and upcoming stations will lead to strong growth in O&M revenue in forthcoming quarters.

On the Media side, the acquisition of Hello Bangkok LED Co Ltd by Master Ad Pcl (Maco) provides a clearer function for domestic media asset management. VGI will continue to focus on strengthening its offline-to-online solutions, as well as enhance synergies across its subsidiaries and associate companies. Maco will focus on international expansion and on being the proprietor of outdoor domestic assets; its domestic media assets will be managed by Plan B Media Pcl (PlanB), the BTS Group said. It is anticipated that synergies across VGI Group’s subsidiaries and associate companies will be enhanced as a result of workforce integration, which should lead to potential cost reductions and attractive development opportunities in the future.

Kavin Kanjanapas, chief executive officer of BTS Group, elaborated: “Aside from these strong financial results, we are investing in our long-term future in complementary sectors. We are open to invest in opportunities that enable us to create synergy around our existing platform, with driven partners who have operational expertise.”

In recent years, BTS Group has been exploring partnerships and projects across the transportation, infrastructure, media, payment, retail and logistics sectors. Most recently, consortiums comprising BTS Group were named as the best bidders of two Intercity Motorway projects and U Tapao International Airport.

In line with the company’s vision “to provide sustainable ‘City Solutions’ that strive to improve the city, community, and its way of life”, BTS Group has been recognised for its sustainability efforts by leading institutions around the world. In this quarter, BTS Group won The Asset Triple A Sustainable Capital Markets Regional Awards 2019 under the category “Best Green Bond” deal in the transportation and infrastructure sector and received the “RobecoSAM’s Silver Class distinction” in the Sustainability Yearbook 2020. “These awards are recognition of our genuine focus on sustainability development, which we firmly believe will ultimately create long-term positive impact for our stakeholders,” Kavin said.