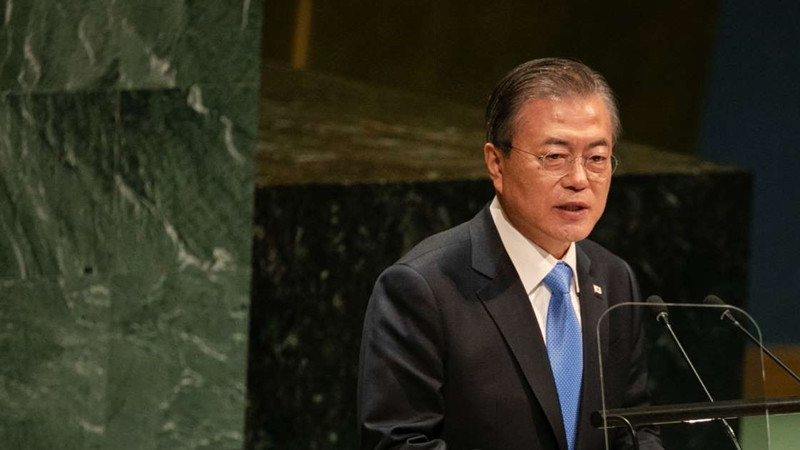 President Moon Jae-in called for "extraordinary" steps to minimize the impact of the coronavirus on South Korea's economy, hinting at the possibility of extra spending to support growth by a government looking to protect a fragile recovery.

"An emergency situation warrants an emergency prescription," Moon told his Cabinet on Tuesday, warning that the virus's impact could be bigger and longer-lasting than a 2015 epidemic that killed 38 people in South Korea and hit growth. Back then, the government put together a 11.6 trillion won ($9.8 billion) extra budget and the central bank cut interest rates.

Moon's remarks ramp up the likelihood that the government may soon reveal extra spending measures, though it remains unclear if the government would match or go beyond the action it took during the crisis over the Middle East Respiratory Syndrome in 2015.

Still, the fact that Moon is calling so publicly for action indicates there may be something substantial in the pipeline, according to Moon Hong-cheol, an analyst at DB Financial Investment.

"It does feel a bit early and elections are near, but it's also true that the president and the ruling party can't afford to let the economic recovery slip after last year's slump," the analyst said.

So far, there have been no deaths in South Korea from the virus, while infections have been limited to 31 people. Still, there is increasing concern that the economic recovery will be derailed for some time if a prolonged outbreak slams supply chains and cuts shipments to China, the country's biggest export market.

Finance Minister Hong Nam-ki already said last week that the government was considering a package of measures to boost exports and domestic consumption after a meeting with BOK Governor Lee Ju-yeol. For his part, Lee tried to tamp down speculation over a possible rate cut at the BOK's meeting next week, saying it was too early to decide whether further action was necessary.

President Moon offered no specifics on measures he's considering to protect the economy in his remarks Tuesday, but he said that "every kind of step that can be taken by the government" should be carried out.

Should South Korea decide to draw up an extra budget, it could set aside as much as 15 trillion won, roughly 0.7% of its gross domestic output, DB Financial Investment's Moon said separately in a report earlier in the day. In 2015, during the MERS crisis, extra money was used to build infrastructure and support small businesses.

Any attempt to pass a sizable spending package would likely face fierce criticism from opposition parties before April's parliamentary elections, according to economist Oh Suk-tae at SG Securities.

"It's too early to shift the entire macro policy over the virus outbreak, but we may see some micro steps to tide the economy over," he said.