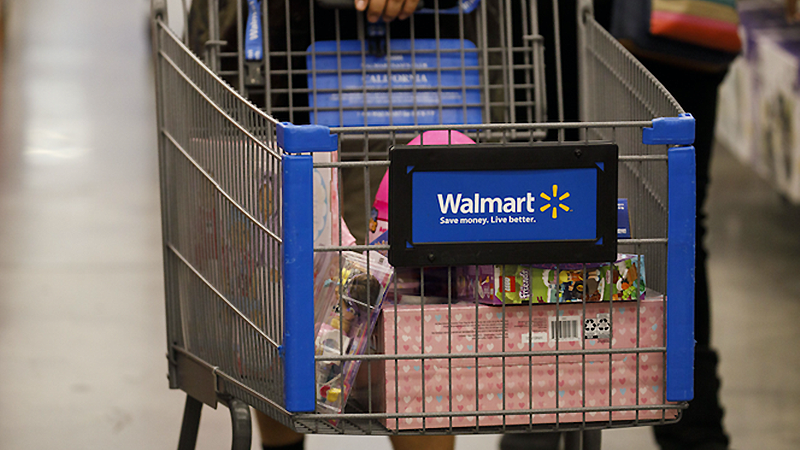 A customer pushes a shopping cart while shopping at a Walmart store in Burbank, Calif., on Nov. 26, 2019. MUST CREDIT: Bloomberg photo by Patrick T. Fallon.

Walmart posted lackluster holiday sales but its outlook for the current year met expectations, displaying the resilience that's kept the retailer among the industry's top performers.

Comparable-store sales, a key retail metric, increased 1.9% for U.S. Walmart stores in the holiday period, compared with the 2.4% average estimate compiled by Consensus Metrix. While the retailer said demand was soft in the weeks leading up to Christmas, its forecast generally pleased investors -- especially its expectation that U.S. e-commerce losses could lessen this year.

"Walmart remains in a good place," Neil Saunders of GlobalData Retail said in a note. "Although Walmart's growth rate softened in the final quarter, the results are nonetheless respectable."

Walmart's lackluster holiday results followed a similarly dour performance from Target. The U.S. retail sector is broadly grappling with store closures, bankruptcies and increasing uncertainty from China's coronavirus, which has disrupted sales and supply chains at global giants including Apple. The outbreak's impact hasn't been included in Walmart's full-year guidance, but could lower first-quarter earnings by a couple of cents per share, Walmart Chief Financial Officer Brett Biggs said.

"We don't know what will happen next" in China, Chief Executive Officer Doug McMillon said, adding that most stores are operating with reduced hours and delivery expenses have increased. "There are so many moving parts right now."

In its home market, where Walmart generates the lion's share of its sales and profit, the subpar holiday was due to weakness in apparel, toys and gaming, Biggs said in an interview, reasons also cited by Target. In apparel, it carried too much seasonal merchandise, he said. Gross profit margins also declined in the quarter due in part to changes in employee pay incentives that were a bigger factor than anticipated as fewer workers skipped shifts during the season.

"There were a number of things that were market-related but some of it was on us," Biggs said, adding that there was "not a lot of newness" in departments like toys and video games.

Walmart shares were little changed at 9:42 a.m. on Tuesday, wavering between gains and losses. Over the past 12 months, the retailer's shares have trailed those of rivals Dollar General, Costco and Target.

This is a make-or-break year for the world's largest retailer, which has made massive investment under McMillon to lower prices, expand its e-commerce operations and enhance employee wages and benefits. Now, shareholders want to see a return from all that spending, particularly at its U.S. online division, which needs to find a path to profitability as it battles Amazon.com Inc. The e-commerce giant accounted for 40% of all U.S. retail sales growth in the fourth quarter, according to Evercore ISI analyst Greg Melich.

Biggs said domestic e-commerce losses were "higher than expected" last year, but will level off or decline in 2020, with details coming during presentations to investors in New York this morning. Walmart's web sales in the U.S. rose 35% in the fourth quarter. It sees e-commerce growth at 30% this year -- a sign the area is slowing some after years of expansion.

The retailer's curbside grocery pickup service has fueled most of those gains, providing a bulwark against encroachment from Amazon.com Inc., but Walmart now needs to find a new pillar of growth online as the click-and-collect service is now available at 3,200 stores.

"The American consumer is still reasonably confident," GlobalData's Saunders said. "Confidence and spending power are there, however, retailers need to work much harder if they want to tap into them."