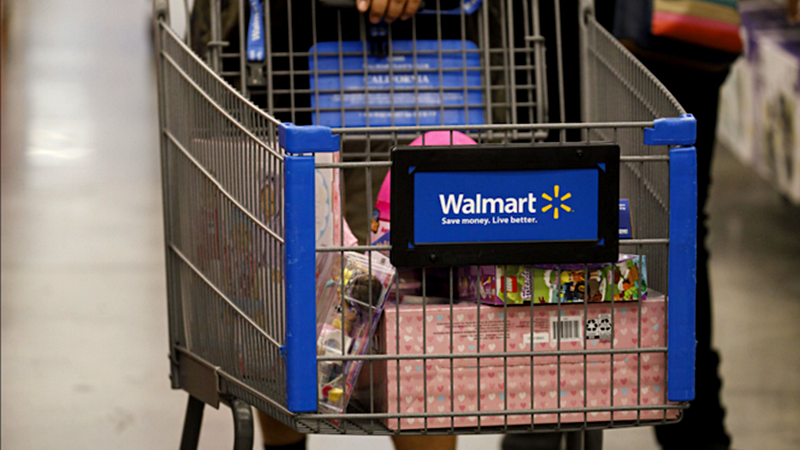 Walmart disappointed on multiple fronts Tuesday, falling short on its fourth-quarter targets and full-year outlook after shoppers scaled back on clothing, toys and video games during the holiday shopping season. But analysts say a key question remains: How will coronavirus impact the world's largest retailer?

The retail giant - which has hundreds of stores in China and gets about 15 percent of its products from factories there - says that while it is monitoring the outbreak, it has no immediate plans to lower its sales forecast because of it.

Though consumers continue to prop up much of the U.S. economy, there are mounting fears the public health crisis in China will have a cascading economic impact. A number of major companies, including Tesla, Nike and Disney have warned that the virus could take a long-term toll on earnings, and Apple this week said it would miss its quarterly revenue goals because of slowing iPhone production in China. Global markets remained jittery on Tuesday as investors looked for signs that other major brands may also take a hit.

"Potential supply chain pressures, in light of virus related challenges in China," continue to present a wild card for the company, Michael Lasser, an analyst for UBS, wrote in a note to clients on Tuesday.

"Make no mistake: If anything is going to dent the world economy, it's coronavirus," said Bob Phibbs, chief executive of the Retail Doctor, a New York-based consulting firm. "It's going to hit all retailers, but the problems are especially magnified for Walmart."

With $524 billion in annual sales, he said Walmart is a closely watched bellwether for the rest of the industry. Its share price remained largely flat Tuesday, as investors digested the news.

So far, Walmart executives said Tuesday, sales in China have not be affected even as the country is largely on lock down. Residents have become increasingly reliant on the company for home delivery of groceries and other supplies.

The majority of Walmart's 438 stores in China are operating on reduced hours, and have shifted their inventory to focus on fresh food and necessities instead of toys and apparel, chief executive Doug McMillon said in a meeting with investors on Tuesday.

"We don't know what's going to happen next," he said. "One of the reasons we couldn't put it in our guidance is because there are so many moving parts right now, including sourcing coming out of China, not only to the U.S. but other markets as well...which makes it really difficult to call how it's going to play out in the quarter."

But industry experts said the outbreak could have far-reaching effects, extending to the company's supply chain.

"Like many other U.S. companies, Walmart has set up a robust supply chain over many years in China," said George Calhoun, professor of quantitative finance for the Stevens Institute of Technology. "There is no question that it will be impacted and disrupted."

Last week, the Bentonville, Arkansas, company said it would lay off nearly 300 workers in New York as it shutters its Jetblack personal shopping service. It also is whittling down mid-level management positions at 1,100 Neighborhood Market and Supercenter stores, leaving workers around the country worried they'll lose their jobs and insurance in coming months.

"Everyone's on pins and needles right now," a customer service manager at a Neighborhood Market in South Carolina told The Washington Post. "People are worried they're going to lose their jobs, their homes, their cars. It's very tense."

Walmart's tepid results come as retailers across the country struggle to get customers into their stores. Same-store sales - a closely watched measure at stores and websites open at least one year - grew a tepid 1.9 percent during the fourth quarter, versus 4.2 percent growth a year earlier.

"Unlike past quarters Walmart was not firing on all cylinders during the last part of the year," Neil Saunders, executive director of GlobalData Retail, said in a note to clients. The company's clothing selections, he added, "were uninspiring, difficult to shop, and did very little to stimulate the consumer. In a relatively weak market, Walmart presented a very weak offer and suffered for doing so."

Online sales, which grew 35 percent from a year earlier, remained a bright spot for the company, as did groceries. Walmart has invested heavily in its e-commerce business in recent years, as it looks for new ways to win over customers. The company said Tuesday it expects that growth to slow this year, to about 30 percent.

Walmart also has a majority stake in JD.com, one of the nation's largest e-commerce sites. China, along with Mexico and India, helped drive much of the company's sales growth in the fourth quarter, chief executive Doug McMillon said Tuesday.