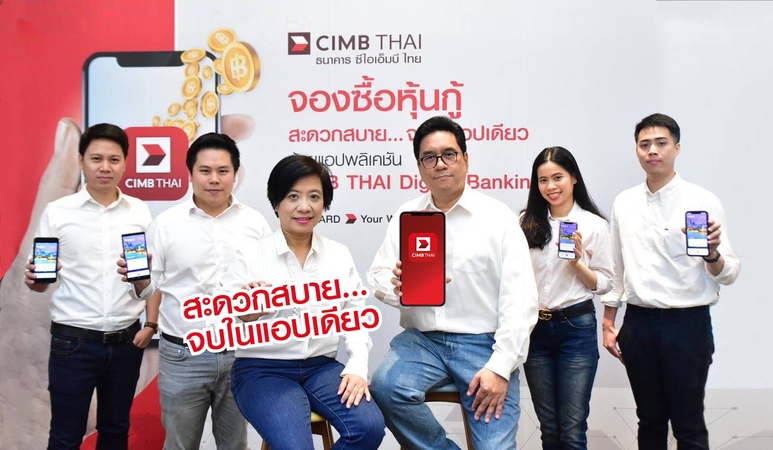 CIMB THAI Bank has launched a new feature of it 's mobile banking application, enabling customers to subscribe corporate bonds under its distribution on their mobile devices.

Dusanee Klewpatinontha, the bank's Executive Vice President, Head of Wealth Management & Segments, said those interested in using the new feature must have a deposit account with the bank. They have to dowload CIMB THAI Digital Banking app into their devices.

There they will find namelists of companies issuing bonds and their prospectus books. They can subscribe to the bonds and pay via the app, with no subscription fee.

The customers have to make sure their accounts have enough money to pay for their desired bonds. Initially the bank caps the value of the bonds they can subscribe at a maximum Bt10 million per day.

She added that at this phase, the service serves only primary bonds before expanding to cover secondary bonds later.

Konthee Prasertwongse, Executive Vice President, Head of Capital Markets of CIMB THAI Bank, said the first debentures customers will be able to subscribe via the app are those of Sansiri Plc.

The debenture carries a term of 3 years 8 months at a fixed interest rate of 3.75 per cent per annum. The debentures will be on offer to institutional investors and / or large investors.

They can make subscriptions at CIMB branches or via the app during February 24-26.

Total value of corporate bonds issued last year hit a record of Bt1.02 trillion, of which Bt660 billion were for repaying those reaching maturity while the rest were new bonds.

This year, the value of the debentures reaching maturity is Bt700 billion.