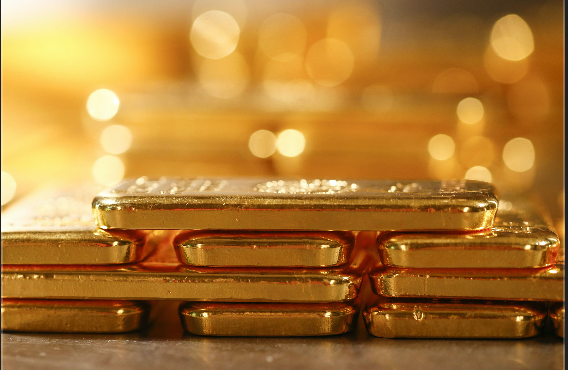 The stars have aligned for gold, as concerns that the coronavirus outbreak may damage growth, hurt risk assets and add to pressures for easier monetary policy trigger a global hunt for havens.

Bullion headed for the biggest weekly gain in more than six months as prices hit a seven-year high. With bond yields in retreat and real U.S. interest rates sinking further into negative territory, gold-backed exchange-traded funds have posted a record run of inflows.

"Gold is in the midst of its perfect storm," said Ole Hansen, head of commodity strategy at Saxo Bank.

Prices for the traditional haven hit records in other currencies including euros and Australian and Canadian dollars. Holdings in bullion-backed ETFs rose for 22 consecutive sessions to Thursday, the longest ever run, according to data compiled by Bloomberg.

This run of inflows "certainly gives an indication about concerns around the global economy," Andrew Jamieson, global head of ETF product at Citigroup in London, said in an interview with Bloomberg TV.

U.S. government bond markets saw a rush of buying Thursday that piled up bets on rate cuts, supporting gold. The Commonwealth Bank of Australia expects the Federal Reserve to ease twice in the second half as the virus threatens the global economy.

Fresh data out of Japan and South Korea on Friday showed how the coronavirus outbreak is taking a toll on economic activity, adding further support to havens.

While there are lots of factors supporting gold, Saxo Bank's Hansen noted the metal's 14-day relative strength index is back in overbought territory.

Still, lower U.S. yields and weaker equities could push prices further toward $1,750 an ounce even if the coronavirus is contained during the first quarter, according to Goldman Sachs.

If the outbreak stretches beyond that, "we see substantially more upside from here -- toward $1,850 an ounce, depending on the magnitude of the global monetary policy response," the bank said in a note Friday.

Other precious metals also gained Friday. Palladium has jumped about 12% this week after hitting a record $2,849.61 an ounce on Wednesday.

Stronger demand and constrained supply will widen the deficit in the palladium market to 1.3 million ounces this year, keeping prices high, according to Australia & New Zealand Banking Group.