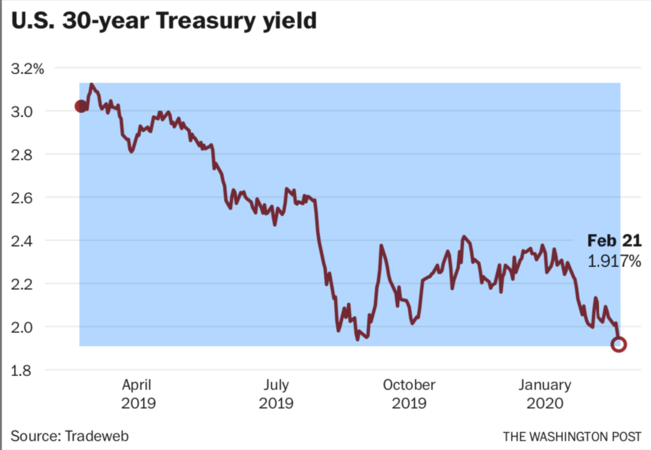 MARKETS-ANALYSIS: The yields of U.S. Treasury bonds, a fundamental marker of the U.S. economy, ticked Friday to a historic low. This is usually a sign that investors are uncommonly nervous.

But what exactly the new low foretells for the U.S. economy has divided the world into two remarkably contrary camps: those who see the new lows as another sign of relative U.S. strength, and those who see it as an unmistakable augury of tough economic times ahead, and possibly, recession.

Maybe most perplexing, massive market wagers have been made in support of both views: The optimists have pushed the stock market ever higher, while the pessimists have driven bond yields ever lower.

As a result, for those who look to the stock and bond markets for clues to the U.S. economy, the picture it presents alternates between exuberance and, increasingly, deep gloom.

"It's getting so the dissonance between the bond market and stock market is deafening," said Diane Swonk, chief economist at Grant Thornton.

On one side of the divide is the enthusiasm of the stock market. Though it dipped on Friday, the S&P 500 average is up 20 percent from its close a year ago. The troubles caused by the coronavirus, and the disruptions at countless Chinese factories, appears to have had little effect on these investors.

"We should be very calm about the U.S. side of the story which is actually looking pretty good," National Economic Council Director Larry Kudlow said Friday on CNBC. "On the other hand, the Chinese side of the story is very difficult - it's a human tragedy."

In this view, the unusually low bond yields can be taken as a sign of U.S. strength. They dropped not because of any weakness in the U.S. economy, but because investors in the overseas economies most affected by the coronavirus are looking for safe investments - and for that they turn to U.S. Treasury bonds.

"I just think, in general, I would be very careful to put too much emphasis on what bond rates are doing," Kudlow said. "I think you have a lot of mood swings here and I don't think it affects the fundamentals.. . . I think the fundamentals of this economy are very solid, all right? Very solid.

In a speech earlier this month, Federal Reserve vice chair Randal Quarles said: "There is much to be encouraged by in the nation's current economic performance even as some notable risks require careful monitoring."

Many analysts agree. A panel of economists known as the Blue Chip Economic Indicators forecast panel, for example, predicted two weeks ago that the economy would continue to grow at roughly two percent.

"This is hardly exuberant," according to the panel's report, which also named the coronavirus epidemic as a risk. But "there is little evidence in these numbers of any expectation of disruptive shocks."

But to other economists, the historic levels in bond yields reflect just one more potential fault line in a U.S. economy that has had a good run since the last recession, but one that won't last forever. In this view, the economic effects of the coronavirus could be the shock that exposes any economic weaknesses.

"I know there are economists out there saying there is no chance of a recession," Swonk said. "But I know that hubris is your enemy late in the business cycle."

Indeed, economists, while noting how hard it can be to predict a downturn, pointed to several signs of stress in the economy that may be leading indicators of a recession.

Stock prices are relatively high, and have surged in recent months. Measured in terms of the ratio of price to earnings of stock in the S&P 500, they have risen substantially in recent years.

Corporate debt, too, has jumped. Since 2012, the amount of long-term debt at industrial companies on the S&P index has more than doubled, to $4 trillion, according to Howard Silverblatt of S&P Global.

"It's historically been a fool-proof leading indicator of recession," Zandi said. "What it means is that people are so worried about the near-term future that they are piling into long-term investments - and it's been inverted over the last week or so."

Complicating all of these forecasts, the good and the bad, are the uncertain effects of the coronavirus on China and other major trading partners.

U.S. policymakers have at times dismissed the epidemic as a problem in China, not here. But more recently, some have acknowledged it could damage U.S. growth outlooks. Federal Reserve Board Chair Jerome Powell said this week there will "very likely be some effects on the United States" from the epidemic, which has closed thousands of Chinese factories supplying American companies.

Earlier this week, for example, Apple warned that it expects to fall short of revenue goals in the current quarter because of the coronavirus outbreak.

In a statement to investors, Apple said that while factories in China were reopening, restarting iPhone production in the country was moving along more slowly than expected.

"Work is starting to resume around the country, but we are experiencing a slower return to normal conditions than we had anticipated," the company said. "These iPhone supply shortages will temporarily affect revenues worldwide."

Swonk and others have said the threat of coronavirus has been too quickly dismissed by some observers, in part because the economies proved relatively resilient during the SARS outbreak in 2003.

"Back in 2003, China was more of an island. Now it's integrated into every economy in the world. It's pivotal in the supply," Swonk said. "The nature of the coronavirus is not something you can put in a traditional [economic] model. There are nonlinear implications."

Peter Whoriskey is a staff writer for The Washington Post whose investigative work focuses on American business and the economy. Previously, he worked at the Miami Herald, where he contributed to the paper's coverage of Hurricane Andrew, which was awarded a Pulitzer Prize for public service.