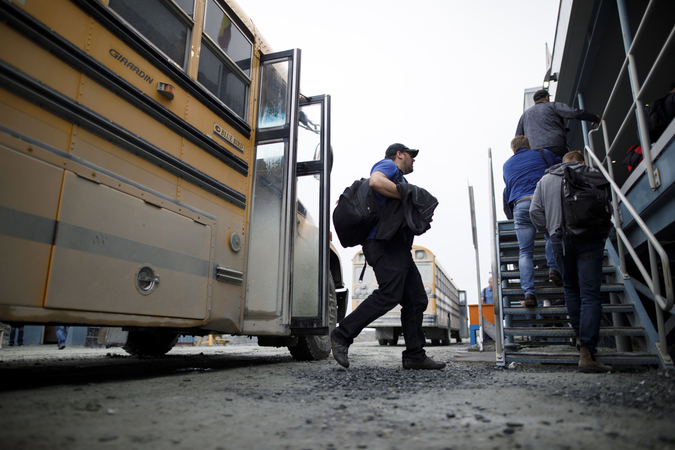 By Special To The Washington Post · Amanda Coletta · WORLD, SCIENCE-ENVIRONMENT

TORONTO - For as long as he's been prime minister, Justin Trudeau has insisted that supporting Canada's struggling oil and gas sector, tackling climate change and mending the country's relationship with its indigenous people go "hand in hand."

His Liberal government would put a price on carbon emissions, giving him the "social license" for energy projects such as pipelines, which would quiet opposition to the carbon tax.

Now, at the start of Trudeau's second term, looms a decision that's testing his commitments both to fighting climate change and to developing Canada's potentially lucrative oil sands.

By the end of the month, Trudeau's cabinet is expected to approve or reject Teck Resources' $15.5 billion Frontier mine proposal for northern Alberta - a 71,600-acre project projected to pump 260,000 barrels of bitumen per day and emit 4.1 megatons of emissions per year for the next four decades.

A federal-provincial review panel found last year that the project would have "significant adverse environmental effects," including the "irreversible" destruction of peatland, impacts on indigenous groups, harm to the wood buffalo and the loss of habitat for at-risk species until at least 2181.

But the panel concluded that the economic benefits - 7,000 jobs during construction, 2,500 jobs during the life of the mine and $52 billion in government coffers - "justified" the environmental effects, and that it was in the public interest.

The decision now belongs to Trudeau - and it could be a political minefield.

Give the project the green light, and he'll be labeled a hypocrite on climate change - again (his government bought the Trans Mountain pipeline in 2018, and approved an expansion last year). Trudeau campaigned on a pledge to get Canada to net zero emissions by 2050. (The country is on track to miss its 2030 target under the Paris accord.)

"If the government is indeed serious in its intention to be a climate leader, it has to address the elephant in the room, which is the continued expansion of the oil and gas sector," said Caroline Brouillette, a climate change researcher with the environmental group Équiterre. "That means saying no to Teck."

But nix the mine, and Trudeau risks raising more opposition in the oil-rich provinces of Alberta and Saskatchewan, which completely shut out his Liberals in last year's federal election, and where struggles in the oil patch have fueled resentment and alienation.

Ratcheting up the stakes, Alberta Premier Jason Kenney has threatened a "swift and serious" reaction if Ottawa gives the project a thumbs-down, and he predicted western alienation would bubble over - leaving nothing short of national unity on the line.

"An arbitrary rejection of the Teck Frontier project at the 11th hour would be yet another signal that the Trudeau Liberals have abandoned our province in our time of need," Christine Myatt, a spokeswoman for the United Conservative premier, wrote in an email.

The bombast belies an awkward fact: Even if the project is approved, it might never get built.

Teck based its proposal on oil prices of $95 a barrel - far higher than where global benchmark prices have been since 2014.

The company said last week it will be forced to take an $855 million impairment charge if the project is not approved. It took a $688 million write-down in the quarter on its Fort Hills mine, which already is in production, because of "lower market expectations" for crude oil prices.

Chris Stannell, a spokesman for Teck, said in an email that the company is evaluating "improvements to project technology and other operational improvements" that it believes will make the Frontier project "technically feasible and commercially viable."

"A lot of the rhetoric is promising people that this project is right there, it's ready to go and all we need is Prime Minister Trudeau," said Andrew Leach, an energy economist at the University of Alberta. "Even if he said yes, at a minimum, this project is years away, and it would need a big rebound in oil prices."

Several oil sands projects that have been approved have yet to be built, Leach notes.

"Right now, the market is saying no," he said. "So it would not just be the government."

The slump in oil prices means the promised economic benefits are more modest than they were when Teck made its proposal, Leach said. He said the government should take that into account.

Chris Severson-Baker, the Alberta director for the Pembina Institute, an environmental think tank, says one reason so much is being read into the Teck decision is that the Trudeau government hasn't produced a clear plan for how it is going to meet its carbon emission targets.

"That puts a lot of pressure on this one project," he said.

A spokeswoman for Canada's environment ministry did not respond to a request for comment.

The federal-provincial panel acknowledged that the Frontier mine might "make it more difficult" for Canada to achieve its domestic and international greenhouse gas emissions commitments, but it did not take that into account when making its recommendation.

Teck Resources says the mine would have a lower emissions intensity than roughly half of all oil refined in the United States. It has promised to get to net zero emissions by 2050 across all of its mining operations; it owns or has interests in 13 facilities in Canada, the United States, Chile and Peru.

Tim McMillan, chief executive of the Canadian Association of Petroleum Producers, said he gives the federal government "full credit" for working since the election to "bridge east and west." Failing to approve the project, he said, would have a "concerning" effect on those efforts and also discourage foreign investment.

The Frontier mine faces opposition from some indigenous groups, who say they have not been sufficiently consulted.

Trudeau is under pressure to resolve several indigenous-led, anti-pipeline blockades that have for more than two weeks paralyzed Canada's railway system, bringing the movement of people and freight to a virtual standstill.

The blockades were set up in solidarity with some members of the Wet'suwet'en Nation in British Columbia who oppose the construction of a natural gas pipeline there.

The project is dividing Trudeau's caucus, as well as the broader Canadian public.

Nearly half of all Canadians support the construction of the mine, according to a survey from the Angus Reid Institute; 40 percent are opposed. Support is highest in the prairie provinces. Opposition is rooted in Quebec, British Columbia and Ontario - key political battlegrounds.

"It certainly makes things, politically, quite tricky for the Trudeau government as it tries to navigate both politically and from a policy perspective," said Shachi Kurl, the institute's executive director. "The country is divided along regional lines and people are divided along political lines. ...

"The numbers really underscore the challenge and the difficulty of trying to approach a middle way."