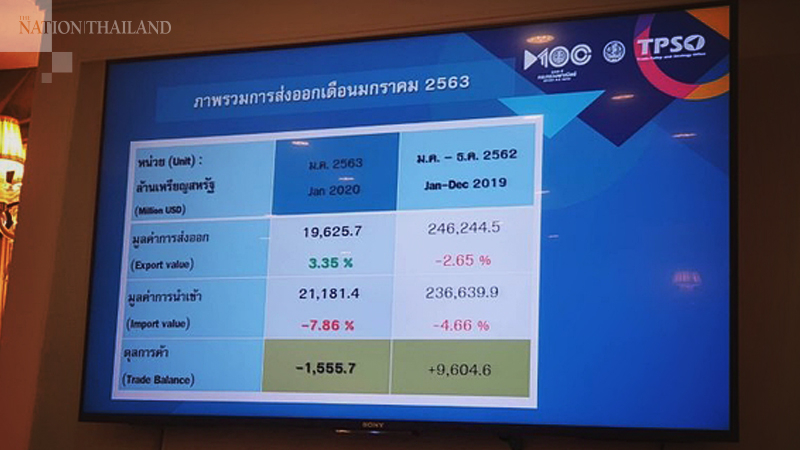 Thai exports grew 3.35 per cent in January 2020, bouncing back to positive growth in the first turnaround in six months, mainly due to oil and gold export , according to a statement from the Trade Policy and Strategy Office on Monday (February 24).

The rise reflects positive sentiment from the Phase-1 deal between the US and China.

Exports of products related to US-China tariff measures, such as computers and components expanded in both the US and China markets.

Excluding golds and oil, Thai exports in January 2020 contracted 0.6 per cent while imports fell 7.86 per cent from a high base of weaponry for military exercise in January last year and a decrease in gold imports .

Excluding golds, oil, and weaponry, Thai imports in January 2020 fell 0.17 per cent. However, imports of capital goods expanded 5.8 per cent , in particular machinery and components which registered the highest growth in 2 years at 18.7 per cent .

In terms of export destination, exports to two major trading partners – the US and China, grew favourably at 9.9 and 5.2 per cent, respectively.

Exports to Taiwan and Middle East stayed on the uptrend, increasing 13.1 and 2 percent. 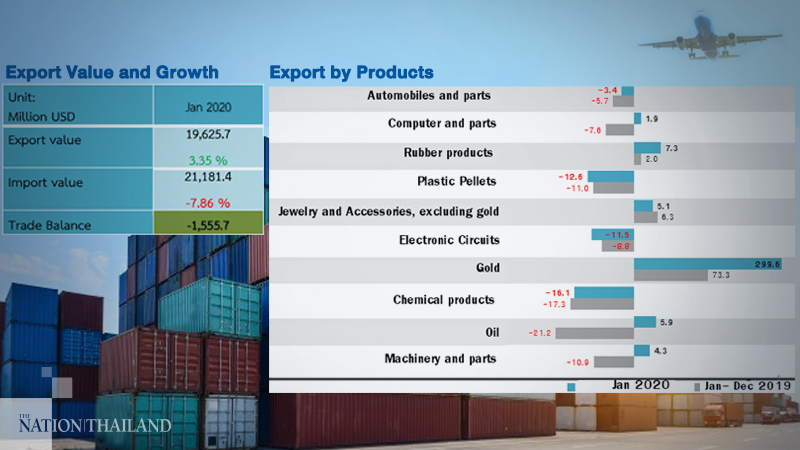 Overall, Thai exports to most trading partners showed a mild recovery. Exports to US and EU (15) expanded 9.9 and 0.6 per cent and exports to Taiwan recorded positive growth of 13.1 per cent for the seventh consecutive month.

Although the Phase-1 deal between the US and China has helped to improve the trading atmosphere and partly reflected on Thai exports in January, the global economy and Thai exports are still facing downside risks from the Covid-19 situation, which could slow down economic recovery in the short and medium term, in addition to geopolitical risks and the low oil price.

However, the Chinese government has taken rapid actions and it shows a continued decline in the number of new confirmed cases in the country.

It is hoped that the situation will soon be under control and China would announce additional stimulus measures to offset the economic impact .

Regarding foreign exchange rate , the baht has slightly depreciated since the beginning of the year. This may reduce pressure on price competition in some products. However, exporters are encouraged to hedge currency risk to minimise negative effects from uncertainties.

Facing many challenging factors across export markets, a variety of Thai export products, distributed in various stages including raw materials, intermediate, and final products, and the export market diversification will support Thai exports well in this period.

Moreover, this is a good opportunity to expedite exports of food products when hygiene and safety are the main concerns as Thailand has an advantage in image and recognized international standards.

In addition, market penetration to online platforms is another option to promote trade in response to modern lifestyles ,especially when consumers are reluctant to leave their homes amid the Covid-19 outbreak.

In regard to long-term trade strategy, the Ministry of Commerce aims to conclude ongoing free trade agreement (FTA) negotiations such as FTA Thailand-Turkey, FTA Thailand - Pakistan, and FTA Thailand - Sri Lanka as well as to prepare for more FTA negotiations to capitalise on trade opportunities from an expansion of partnerships.