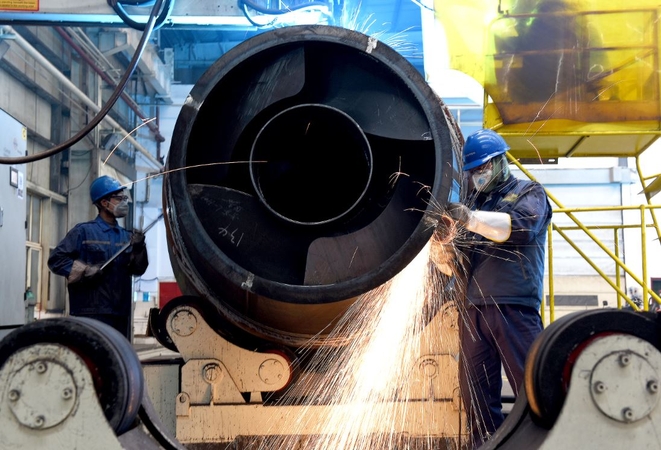 China is trying to get people back to work, risking a renewed spread of the coronavirus.

Central and local governments are loosening the criteria for factories to resume operations as they walk a tightrope between containing a virus that has killed almost 2,600 people and preventing a slump in the world's second-largest economy.

The rush to restart has been propelled by China's leader Xi Jinping and top leaders, who are urging companies to resume production so the country can continue to meet lofty 2020 goals for growth and economic development. At stake are the fates of millions of Chinese businesses facing collapse because of the shutdowns, and the ability of companies across the globe from Apple to Nissan to access crucial components.

Officials in China's provinces have taken up Xi's call, with one region after another relaxing rules that had kept more than half the nation's industrial base idle following the Lunar New Year holiday. After weeks of empty streets and shuttered shops, signs of life are emerging along the manufacturing belt in the country's coastal regions.

On Monday, at least six provinces lowered their emergency response levels from the highest rating.

Chinese authorities, however, reiterated that Wuhan -- the epicenter of the outbreak -- will stay locked down, retracting a statement sent earlier in the day that had announced partial easing of travel curbs. The conflicting messages underscore the dilemma China faces on how to spur its ailing economy and curb the deadly virus.

About 600 kilometers east of Wuhan, vendors and customers at the Yiwu wholesale market in Zhejiang province are having their body temperatures tested at the entrances after the vast complex that wholesales manufactured goods reopened last Tuesday, three days earlier than expected. Power demand has also started to pick up in China, with six major generators reporting that coal consumption -- while still below pre-holiday levels -- rose 7% on Feb. 20 from the previous day.

But labor is still a big issue for many.

"Our factory is still missing quite a lot of workers, so we can only resume limited production," said Dong Liu, vice president of a textile manufacturer in Fujian, southeastern China, that employs more than 400 workers. Dong said he applied to the government on Feb. 17 to restart and the inspector came the next day and gave permission. "More and more factories are allowed to reopen this week," he said.

The push to get production rolling again risks a renewed spread of the virus, about which much is still not yet known. While more than 79,000 people have been infected worldwide, the vast majority of those cases are in seven Chinese provinces, and mostly in the central province of Hubei, where restrictions on movement were imposed in a number of cities, but not before a lot of people had already left the region for the New Year break.

"A peak may come at the end of this month for the whole country but it won't necessarily indicate a turning point," Zhong Nanshan, a respiratory disease expert who led research into a treatment for SARS, told reporters in Guangzhou. "The epidemic could have a new peak after people travel back to work."

China's economy was likely running at about 50% to 60% capacity in the week to Feb. 21, according to a Bloomberg Economics report. Official statistics showed that more than 70% of plants in provinces such as Shandong and Jiangsu have now restarted, with the rate above 90% in Zhejiang, though most are running below capacity with many workers still missing. In Hunan, the province just south of Hubei, the restart rate was only 46% on Feb. 17 with fewer than a third of staff returning.

Cities that rely heavily on manufacturing such as Dongguan and Zhongshan are now saying they won't require workers to be quarantined as long as they are healthy, and factories that meet new safety rules don't need to wait for government approval to resume.

"It is extremely important to get factories back to operate at their normal capacity, otherwise, it will hurt workers' wages, companies' cash flows, and therefore external exports," said Iris Pang, an economist with ING Bank NV in Hong Kong.

"Imagine if a factory resumes work today but has a worker found to be a confirmed case a week later, then the factory has to close for another two weeks," she said.

That's making local governments and plant owners wary of how they proceed.

In Dongguan, a key manufacturing city in the Pearl River Delta, a government document sighted by Bloomberg requires manufacturers to carry out a checklist to ensure facilities are clean and staff are healthy. Plants can then restart after posting notices of resumption inside and outside the plant. The document warns that the companies are responsible for handling significant risks to controlling the virus and may face punishment if they fail to do so. Healthy workers with a temperature lower than 37.3 Celsius from outside Hubei and other badly affected regions can work immediately after they return to Dongguan.

But granting permission to restart is only the first hurdle in getting back to full production. Workers from heavily infected areas are still barred from returning to work in big industrial cities. Manufacturers must also wait for suppliers to begin shipping, villages to dismantle roadblocks and transport companies to restart distribution.

"As the requirements to resume production in each region are rather different, even if we restart our factory, we still need to figure out a slew of issues ranging from upstream and downstream materials, to logistics, packaging, and storage," said Jacky Han, owner of a car parts factory in Qingdao, a city in Shandong province. "Basically, every enterprise is freelancing on their own and using their own resources and networks to solve the puzzle."

Since the Lunar New Year holiday began in late January, only about 20% as many trips have been taken each day compared to the previous year, meaning millions of people still haven't traveled back to the cities where they work and live. Long-distance buses were only allowed to operate at 50% of capacity to reduce the risk of viral transmission.

China's central and local governments are taking other steps to try to reduce the economic effects to the outbreak. President Xi told U.K. Prime Minister Boris Johnson in a phone call last week that China is confident in achieving its growth targets set for this year, according to China Central Television.

The government is considering direct cash infusions or mergers to help the airline industry, including a proposal for a provincial government to take over indebted conglomerate HNA Group Co.

About 80 million migrant workers have returned to where they work, and 120 million more will return by the end of February, according to a transport ministry official, Liu Xiaoming. Another 100 million will return from March onwards, Liu said.

Even if factories can get all their employees back to work, restrictions on work practices may mean that they aren't able to resume full employment anyway.

In Zhenjiang, a city in Jiangsu province, an LED car lighting factory recently resumed production, but only after finally getting enough supplies to fulfill local government requirements to provide five masks per worker, along with disinfectant and protective suits.

"Every day several government departments send representatives to spot check our efforts to curb the virus," said Melissa Shu, the company's export manager. "They come from the district government, the center for disease control, the city government, at different times of day and check if we disinfect in time, whether we test the temperature of workers, whether workers have masks, whether one person has a separate lunch seat, whether lunch is properly arranged, etc, etc."

"As a result, we can't ask all the workers to come to work even when they're in town ready to work," she said, adding that the plant has 40 to 50 staff members working in rotation, about half the number employed before the virus.

Ironically, some Chinese factories already have plenty of space, thanks to the long-running trade war with the U.S.

"Compared with the virus, that was much worse" said Hui Zhuo, founder of a wooden furniture manufacturer in Zhongshan, in the Pearl River Delta. "We've cut a lot of workers in the last two years -- so I'm not too worried this time because the space in my factory is big enough to avoid being crowded."

Like nearby Dongguan, the government in Zhongshan has relaxed restart rules. Zhuo has been studying the government checklist carefully, preparing sanitizer, masks and thermometers.

Factories must disinfect facilities and check workers' temperatures every day. Each worker dormitory must delegate one person to shop for them every other day, and the others are not allowed to leave the factory. Zhuo's confident that if he sticks to the rules, he won't have a problem with the virus.

In the longer term, the outbreak is likely to exacerbate the damage wrought on China's factories by the trade war. For some overseas customers in fast-moving industries like fashion, the factory shutdown amid the virus has been another wake-up call that may spur them to reduce their reliance on Chinese suppliers.

"I think for the next season or the next year's goods, retailers would be looking at sourcing more from other countries," said AJ Mak, CEO of Chain of Demand, which provides artificial-intelligence systems to retailers in Asia and the U.S. to predict product demand. "I think those conversations which started from the trade war would be definitely accelerated."

Meanwhile China's push to salvage its growth targets won't be complete until the virus is fully under control -- something that is impossible to predict.

"When can everyone come back to work? No one knows," said Shu at the Zhenjiang LED factory. "Logistics is still not yet fully resumed, inter-city transportation is still restricted. Only after the epidemic is fully controlled, we can truly return to normal work and life."