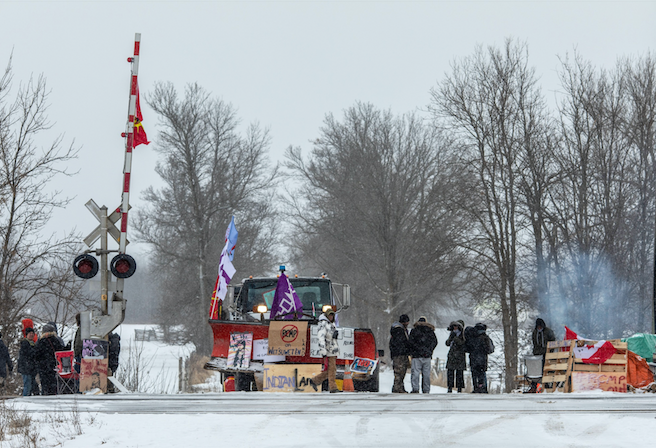 Demonstrators stand at a rail blockade, during a protest near Belleville, Ontario, Canada, on Feb. 13, 2020. MUST CREDIT: Bloomberg photo by Brett Gundlock.

Prime Minister Justin Trudeau's government hopes to restart talks with Indigenous groups now that police have begun to clear a key rail blockade that has disrupted Canada's economy for weeks.

Trudeau met with his top officials in Ottawa on Monday morning as provincial authorities moved in to clear a protest site near Belleville, Ontario. The blockade by Mohawk leaders was erected Feb. 6 in solidarity with some Wet'suwet'en Nation hereditary chiefs in British Columbia who oppose TC Energy Corp.'s Coastal GasLink pipeline, a C$6.6 billion ($5 billion) liquefied natural gas project.

"We are committed to reconciliation and we are committed to sitting down and having a dialogue over the specific problem that exists with the Wet'suwet'en," Transport Minister Marc Garneau told reporters after the cabinet meeting. "But at the same time the barricades had to come down because it was having a profound effect on the economy."

Demonstrations in several provinces by environmental and indigenous-rights activists had crippled freight and passenger traffic across Canada. Some blockades came down thanks to injunctions obtained by Canadian National Railway Co., but the one in Tyendinaga, Ontario -- along the key Toronto-to-Montreal corridor -- persisted past a midnight deadline Sunday, prompting police to move in.

While Public Safety Minister Bill Blair said he is concerned about potential blowback from the detentions, he doesn't think the Mohawk protesters intended to cause harm to the broader population. "Once those barricades are down, come back to the table. We've got so much work to do," he said after the meeting with Trudeau.

Indigenous Services Minister Marc Miller, speaking Monday afternoon outside the legislature, added: "We're not only fighting days of suspicion and mistrust, but decades and even centuries in some cases."

Protesters were detained by police in Tyendinaga, as provincial governments followed through on warnings that they would clear rail lines that have been blocked for weeks.

At least three demonstrators were restrained by provincial police Monday morning, according to the state broadcaster. They were warned Sunday that they'd face a police investigation and charges if they didn't obey a midnight deadline to disperse, the Canadian Broadcasting Corp. reported, citing a Mohawk source. The blockade is about 130 miles northeast of Toronto.

"The Ontario Provincial Police has taken action to resolve protest activity and remove the barriers to rail service in and near Tyendinaga Township," according to a statement. "We have remained respectful of the ongoing dialogue, including issues of sovereignty between our Indigenous communities and various federal ministers."

Trudeau, who spoke with premiers from British Columbia, Ontario and Quebec on Sunday, informed them "of measures being taken to ensure that critical needs are addressed across Canada, including propane, chemicals to treat drinking water, and essential agricultural products," according to a statement from his office.

On Saturday, Blair called officials in Ontario and Quebec to discuss "ongoing work to end" the blockades, according to statements from his office. He told Quebec's minister of municipal affairs and housing that he "appreciated the measured and effective approach taken by the police in Quebec."

Having asked for patience throughout last week, Trudeau changed tack on Friday afternoon. "We cannot continue to watch Canadians suffer shortages and layoffs," the prime minister said in a televised address to the nation, adding that the responsibility to enforce court orders lies with provincial police forces. "The barricades must now come down," he said.