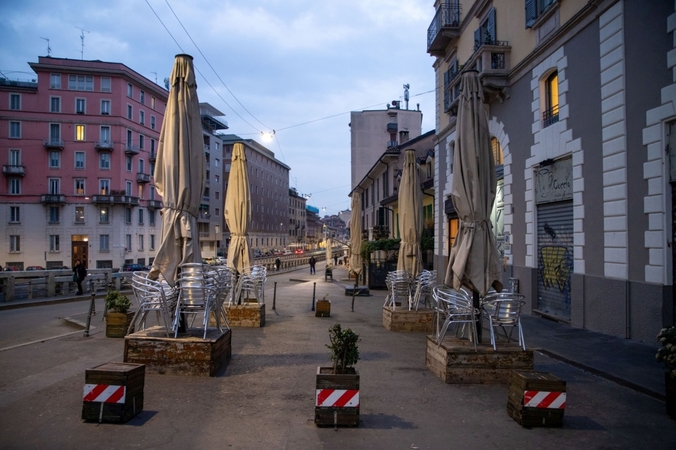 All the bars in Navigli are close after a regional ordinance that declares the closure of all bars after 6 p.m. in Milan on Tuesday, Feb. 25, 2020. MUST CREDIT: Bloomberg photo by Camilla Cerea

Anheuser-Busch InBev NV, the world's largest brewer, cut its chief executive's bonus and forecast the steepest decline in quarterly profit in at least a decade as the coronavirus slows barhopping.

First-quarter earnings will drop about 10%, the company predicted Thursday. AB InBev also said last year was disappointing. Chief Executive Officer Carlos Brito's bonus was curtailed after the biggest jump in raw material costs in a decade eroded profit growth. The stock fell as much as 8.2%, approaching an eight-year low.

For a company that says its main product brings people together, the coronavirus presents a particular problem as consumers in China avoid going out in public. Shipments had already started to slow in that market at the end of last year, leading the brewer to lower its guidance. While AB InBev is betting on a rebound in the later part of this year, the lower end of the 2020 forecast of 2% to 5% would be the weakest growth in four years.

The Budweiser maker has reopened over half of its 33 breweries in China and has permission from the government to restart the remainder of them, except for a facility in Wuhan, the epicenter of the disease outbreak.

Brito told Bloomberg that he got a bonus in the first half but not in the second as the company amended its usual practice of paying a bonus on an annual basis. It's a rare move for the brewer, which cut bonuses for its top management in 2017 after a bad year.

"I'm never worried about the share price, I'm focused on our business," the CEO said, speaking in a phone interview. "What I tell our people is this: Guys, we have an amazing talent pool and an amazing set of brands. Sometimes there is a lag, but if the business performs, the share price will follow."

The company was one of the first to reopen its office in Shanghai, with government officials attending the event. AB InBev has shipped in about 1 million hygienic masks that it's distributing to employees and local communities.

The brewer is reallocating the distribution of its beers from nightlife venues, its most profitable points of sale in China, to other avenues of sale such as e-commerce.

Profit fell 5.5% on an adjusted basis before interest, taxes, depreciation and amortization in the fourth quarter, the Leuven, Belgium-based brewer said Thursday. Analysts expected a drop of 1.9%.

The disease outbreak has wiped about $170 million off AB InBev's earnings in China in January and February and $285 million off revenue.

AB InBev sold a stake in its Asia-Pacific unit Budweiser Brewing in September to help reduce debt and to serve as a vehicle for mergers and acquisitions.

AB InBev is known in the consumer-goods industry for giving outsize responsibility to young employees and generously rewarding them if they meet stringent sales growth and profitability targets. It's given AB InBev some of the most impressive margins in the brewing industry. Still, the brewer is struggling to sell old-line brands such as Budweiser and Bud Light amid the growth in craft beer and hard seltzers.