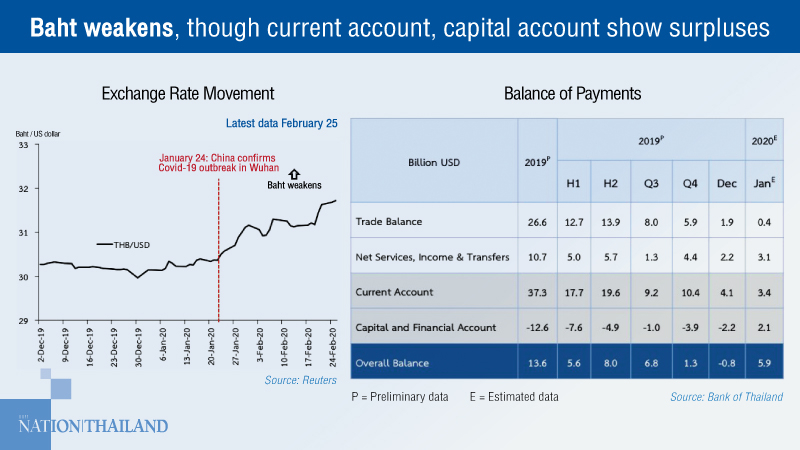 The Thai economy continued on a path of deceleration in January, contracting from the previous month in the value of merchandise exports excluding gold, manufacturing production, private investment indicators, and public spending, said Bank of Thailand today (February 28).

Private consumption indicators expanded at a slower pace. However, farm income accelerated whereas the tourism sector expanded at a rate close to the previous month, according to the central bank.

The value of merchandise exports expanded by 3.5 per cent from the same period last year. Excluding gold, exports value growth remained negative at 1.3 per cent. The continued contraction was attributed to lower exports of 1) petroleum-related products such as chemical and petrochemical products, partly due to the slowdown in trading partners’ demand; 2) agricultural products, especially rice, as a result of price competition from rival producers and supply affected by the drought; and 3) electronic products which turned into contraction from the high base effect last year. However, exports of electrical appliances and hard disk drive continued to expand, thanks to the relocation of production base to Thailand in the previous periods. Also, exports of agro-manufacturing products continued to expand, including sugar.

Private investment indicators continued to deteriorate from the same period last year. The slowdown in domestic and external demand, the low capacity utilisation rate, and the fragile business sentiment had led to delay in business investment. This was reflected by the continued contraction of investment in machinery and equipment from domestic machinery sales, and the number of newly registered motor vehicles, as well as import of capital goods which turned into contraction. In addition, investment in construction contracted from both permitted construction area and construction material sales.

Private consumption indicators expanded at a slower pace from the same period last year, consistent with softening household income and consumer confidence, together with financial institutions’ tightening of credit standards after credit quality deteriorated. Although farm income expanded well in this month, the outlook for this year was likely to be subdued because of drought. The deceleration in private consumption indicators was in spending on services although spending on non-durable goods slightly improved from sales of consumer goods after declining in previous periods. Spending on durable goods contracted to a lesser extent, partly due to benefits offered in new car purchases. Consistently, manufacturing production contracted in line with softer domestic and external demand.

The value of merchandise imports was unchanged from the same period last year. However, excluding gold, imports value expanded by 1.4 per cent. This was attributable to the expansion in imports of 1) fuel, both in terms of price and quantity; and 2) consumer goods such as air conditioner and garment. Nevertheless, imports of raw materials and intermediate goods as well as capital goods excluding aircraft, ships, floating structures, and locomotive, contracted in line with the contraction of merchandise exports, manufacturing production, and private investment indicators.

The number of foreign tourist arrivals expanded 2.5 per cent , close to the previous month , mainly from higher arrivals of Malaysian, Russian and Hong Kong tourists during the Chinese New Year holiday, which came earlier than in the previous year. However, the number of Chinese tourists contracted due to the Chinese government's ban on outbound group tours since January 24, 2020 in wake of the Covid-19 outbreak in the country.

Headline inflation stood at 1.05 per cent, accelerating from the previous month on the back of an increase in energy prices, partly due to the low base effect from domestic retail petroleum prices last year. Meanwhile, core inflation slightly decreased. The current account registered a smaller surplus from the trade balance, standing at $3.4 billion compared with $4.1 bilion in December. The overall capital and financial accounts registered a surplus from both the asset and the liability positions. The former was due to the withdrawal of deposit abroad by the Foreign Investment Fund (FIF) while the latter was mainly a result of foreign direct investment, especially in real estate business, and the short-term loan of Thai Other Depository Corporations (ODCs).