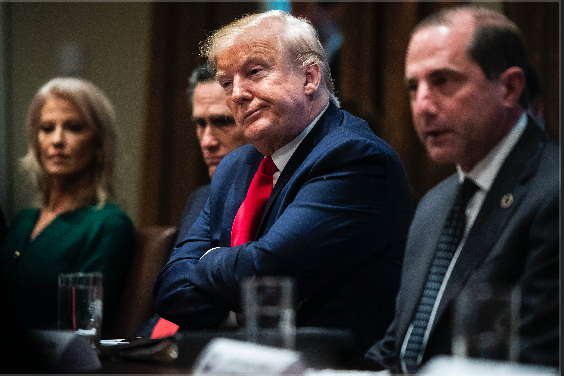 WASHINGTON - Trump administration officials are holding preliminary conversations about economic responses to the coronavirus, as the stock market fell sharply again on Friday amid international fears about the outbreak, according to five people with knowledge of the planning.

Among the options being considered are pursuing a targeted tax cut package, these people said. They have also discussed whether the White House should lean even harder on the Federal Reserve to cut interest rates, though the central bank on Friday afternoon said it would step in if necessary.

No decisions at the White House have been reached on these options and officials stressed conversations remained preliminary and extremely fluid.

These ideas would not be designed to stop the spread of the coronavirus, but they would seek to arrest the economic fears spreading through the economy. And some of the ideas would need cooperation from Congress or the Fed, as the White House has limited powers to unilaterally rewrite tax policy or direct the central bank to act.

Asked about potential tax cuts options, one senior administration official said numerous ideas are being discussed and that the talks were "very preliminary."

The people spoke on the condition of anonymity to discuss internal planning. White House officials are expected to present President Donald Trump a menu of options at a later point.

White House economic adviser Larry Kudlow, a member of the coronavirus task force assembled by the White House, told reporters Friday there were many internal meetings but that no "precipitous" actions are imminent.

"There is nothing definite I can report. There's a lot of conversations in and out of the Oval Office," Kudlow said when asked about a potential White House response. "I was with [Trump] the other day talking about one thing or another. We are dealing with this almost a day at a time, and we have no precipitous actions right now."

According to a pool report, Kudlow added: "I just don't think anybody ought to panic right now. We're going to stay the course on our policies."

Trump has been alarmed by turbulence in global economic markets, The Washington Post reported earlier this week. On Friday, the Dow Jones industrial average opened by falling an additional 1,000 points - or nearly 4 percent - after already being repeatedly clobbered throughout the week. Some experts fear the coronavirus outbreak will lead to a prolonged economic impact, and worry that federal policymakers have limited measures to respond at their disposal.

Fed Chair Jerome Powell said in a statement Friday that the central bank will "act as appropriate" to help the U.S. economy. "The Federal Reserve is closely monitoring developments and their implications for the economic outlook," the statement said. "We will use our tools and act as appropriate to support the economy."

Trump has frequently attacked the Fed during his presidency, and at his news conference on coronavirus on Wednesday again maligned the central bank for not doing enough to cut interest rates. Trump can call on the Fed to lower interest rates but there is not precedent for him ordering them to do so, so his powers could be limited. Congressional lawmakers have also begun discussing a multibillion-dollar supplemental aid package to help respond to the outbreak, and those discussions are expected to continue into the weekend.

Sen. Charles Grassley, R-Iowa, chairman of the Senate Finance Committee, said there are no plans as of now to prepare a tax cut to respond to the coronavirus threat.

"At this point, the coronavirus has not had a broad impact on the U.S. economy and its effects have been limited. However, Chairman Grassley and the Senate Finance Committee stand ready to consider appropriate tax relief responses if that becomes necessary and the extent of the problem can be determined," Michael Zona, a Grassley spokesman, said in a statement.

The options for the White House are limited. Historically, most administrations have found it difficult to instill confidence in troubled investors, and this case may present a particularly vexing challenge, said Chris Rupkey, chief financial economist at MUFG.

"They're really stuck here in terms of trying to find a fix for the plunging stock market," Rupkey said. "It's very difficult to stem a panic like this has become. Everyone is just waiting for the next shoe to drop."