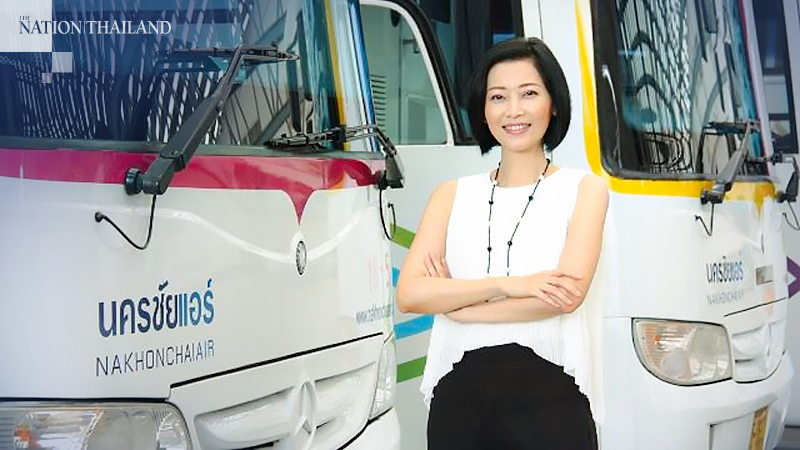 It plans to operate on a new route -- Bangkok-Lamphun -- from this April, Kreawan Wongrakmit, president of Nakhonchai Air Co Ltd, said.

The company generated income in 2019 of Bt1.795 billion with average passengers for the year at 4.1 million people, roughly the same as in the previous year.

“Last year Nakhonchai Air opened new routes from Bangkok to Sanom district in Surin province and to Paksaeng district in Ubon Ratchathani province,” she said. “Currently we have 41 routes nationwide.”

Kreawan added that the company was planning to open a new route to Lamphun this April. “We will add more trips on the Bangkok-Surin route, increasing from 10 trips a day to 14, and on the Bangkok-Buri Ram route from 11 trips a day to 16 by June, as well as open a new branch office in Ayutthaya province next month, which will help facilitate customers who wish to travel to Chiang Rai, Chiang Mai, Nan and Uttaradit.”

In the long-term, Kreawan said the company will expand routes to connect downtown areas of main tourist provinces to secondary tourist provinces to enlarge the tourism network and disperse capital and investment to rural communities. “This business plan is in compliance with the government’s policy to stimulate the economy of local communities and increase employment for local people to reduce overcrowding in big cities,” she added.

At present Nakhonchai Air have a fleet of 56 coaches comprising 12 NCA First Class and 34 NCA Gold Class. “By 2021, we expect to add 45 coaches with a budget of Bt315 million,” said Kreawan.