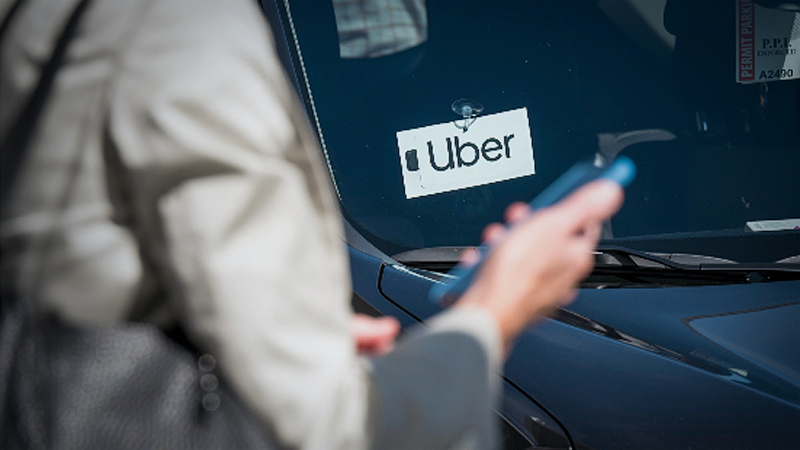 SAN FRANCISCO - Some workers here who provide on-demand rides and delivery services, but are independent contractors without many protections, are bracing for the spread of the novel coronavirus.

Drivers have been scrubbing down their cars "inch by inch" between rides at local airport parking lots, according Edan Alva, who drives full-time for Lyft in the Bay Area.

Alva said the company has not communicated with drivers yet about the novel coronavirus, despite the risk of infection. "No support, no advice, no guidance regarding what we do if we suspect any indicators of the problem," said Alva, who added that he has been spraying his car with Lysol twice a day.

Lyft spokeswoman Alexandra LaManna said there is no indication of a unique risk to Lyft drivers and that the company is monitoring the situation.

Meanwhile, Uber sent an in-app message to U.S. drivers Friday with guidance on how to protect themselves and others, guidance that included standard advice from health officials, such as staying home if they feel sick and washing their hands frequently. Uber also urged drivers to clean and disinfect frequently touched surfaces in their vehicles.

As coronavirus spreads globally, prompting some companies to instruct employees to stop traveling or to work remotely, one of the most vulnerable groups is likely to be tens of thousands of gig workers like Alva.

"With the gig economy specifically, it's full of low-income, independent contractors who don't have very good health insurance," said Alex Rosenblat, the author of "Uberland: How Algorithms Are Rewriting the Rules of Work" and research lead for the nonprofit organization Data & Society. "They're not going to have better protections than anyone else, but they may have higher risk."

App-using companies such as Uber, Lyft, the grocery delivery service Instacart and the food delivery service DoorDash have classified the workers who deliver meals or transport passengers as independent contractors. This classification has saved the companies the cost of providing health insurance and other benefits to the people who make their service possible. Independent contractors also do not have the right to unionize.

But as cases of the new coronavirus appear, gig workers find themselves with few health protections but with a potentially higher risk of coming into contact with infected people.

Coronavirus fears have prompted some U.S. drivers to reject rides at airports with Asian passengers, according to Bloomberg News. At the same time, drivers are also worried about missing income if they stop driving or cancel rides.

The disease could potentially spread more quickly if sick people go to work because they can't afford to stay home. And it's not just gig workers. Only 46 percent of service workers received sick-leave benefits in 2017, according to the U.S. Bureau of Labor Statistics, compared with 93 percent of workers in management, business and finance.

The health risks posed by the new coronavirus could possibly prompt policy changes as companies think about liability issues if a driver or passenger is infected, Rosenblat said. For instance, drivers have no tool to report potentially infected passengers, she said, and it is unclear whether the algorithms that match drivers and passengers are factoring in health risks.

Although Lyft cites a lack of unique risk to its drivers, "in accordance with the Centers for Disease Control's guidance to prepare for further spread of the virus, we have established an internal task force to ensure we are prepared to take action if needed," Lyft's LaManna said.

Uber said it always works to help ensure the safety of everyone using its platform. "We have formed a dedicated global team of Uber operations, security and safety executives, guided by the advice of a consulting public health expert, to respond as needed in each market where we operate around the world," said Andrew Hasbun, Uber's head of safety communications, in a statement. "We remain in close contact with local public health organizations and will continue to follow their recommendations."

Instacart spokeswoman Natalia Montalvo said in a statement that the company is working with local and national authorities to monitor the situation. "We're adhering to recommendations from public health officials to ensure we're operating safely with minimal disruption to our service, while also taking the appropriate precautionary measures to keep teams, shoppers and customers safe," Montalvo said.

DoorDash did not immediately respond to a request for comment.

The independent-contractor classification is being challenged in California. This week, a judge in San Diego issued the first court decision under California's new AB5 law, ruling that Instacart is likely to have misclassified grocery shoppers as contractors when they should be employees.

On Saturday, Silicon Valley Rising, a labor advocacy campaign led by the community organizing group Working Partnerships USA, urged tech companies to include contractors and gig workers in their response plans. The campaign also asked companies to provide protective equipment, healthcare coverage, sick leave, and to ensure that workers who take sick leave are not stigmatized when they return.

"Cafeteria workers, janitors, security officers, shuttle drivers, and people working in the gig economy frequently interact with large numbers of people in the course of their jobs," Silicon Valley Rising wrote in a statement posted on Twitter. "It is critical that companies partner with workers and unions to mitigate risks and protect public health."

Menlo Park resident Vanessa Bain, a gig worker for the grocery-delivery app Instacart, says concerns around coronavirus are part of a larger conversation about why misclassifying employees as contractors can be harmful. Not having health insurance for workers who encounter hundreds of people in the course of their regular work could be a public health risk, she says.

"We deliver to people's homes when they're sick all the time," says Bain, who has also operated a grassroots campaign to win Instacart workers more rights. She is covered by MediCal, a low-cost state health insurance, but protections are limited. So Bain no longer takes orders that contain supplies like Kleenex and Sudafed.

Lyft drivers Alva and Carlos Ramos are also labor organizers through Gig Workers Rising, a group that partners with the Teamsters union but does not take funding from the union. Both drivers say the spread of coronavirus is a real-world example of why drivers need protections such as sick days, health insurance, disability, death benefits and minimum wage.

"Right now, it's kind of a balancing act between putting ourselves at risk and being able to keep the lights on," Ramos said.

Alva said that when he had the flu in January, he did not go to the doctor because every visit costs him $100 until he hits his high deductible, and that amount of money is hard to come by since he lost his 10-year job as a contractor for PayPal working on global security operations, which involved analyzing risks to the company such as extreme weather patterns, political instability and fraud.

To make ends meet, Alva had to work while he was sick. He suspects that other drivers are in the same position. "If we catch it, other people are likely to catch it from us because we are not likely to go to the doctor," he said.