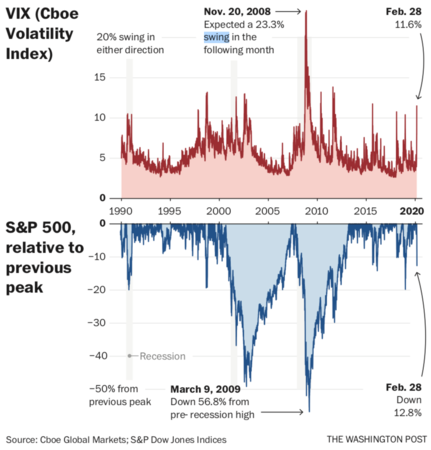 An index pundits love to call Wall Street's "fear gauge" is flashing red. Should we panic?

The long answer is full of nuance and numbers. The short answer? Fasten your seat belts. No matter how this ends, we may be in for some turbulence.

At one point in Friday's hectic trading, the Cboe Volatility Index, better known as the VIX, was higher than it had been at the close of any trading day since the Great Recession. It recovered slightly, but remained at a four-year high when markets closed.

The VIX is called a fear index because it measures how much investors expect the Standard & Poor 500, a widely watched index of U.S. stocks, to fluctuate in the coming month. It helps folks gauge risk and, with the help of related investment vehicles, to hedge against sudden swings in their portfolio. The S&P 500 includes big tech companies like Apple and Microsoft as well as corporate heavyweights such as Berkshire Hathaway, Johnson & Johnson and Home Depot.

The S&P 500 ended Friday 12.8% below the all-time high it hit on Feb. 19, less than two weeks earlier. At that time, investors expected steady sailing - the VIX indicated markets would move a modest 4.2% in the next 30 days.

But since it set that record, the S&P 500 has defied those expectations in the worst sort of way. Investors were spooked by the rapid global spread of the novel coronavirus - and governments' willingness to pursue aggressive containment strategies that could hamstring economic activity. It's the worst week the S&P 500 has seen since the global financial crisis.

As the virus spread, the VIX soared. Its latest reading indicates traders expect the S&P 500 to rise or fall 11.6% in the coming 30 days. That's about equal to the market's movement since Feb. 19 - but the swing could be in either direction, encompassing everything from a complete recovery to a full-fledged bear market. On Wall Street, a bear market is one that has fallen 20% or more.

Because the VIX forecasts the range of the change in the S&P 500, rather than the direction, it doesn't feel quite right to call the VIX a fear gauge. After all, people certainly fear a 11.6% drop, but do they fear an equally likely 11.6% gain?

The VIX, as launched in 1993 and updated in 2003, is calculated using data from some of the million-plus S&P 500 option contracts that change hands each day on Cboe, a vast market formerly known as the Chicago Board Options Exchange. By looking at how traders value the opportunity to buy or sell the S&P 500 at a given level 30 days down the road, analysts are able to determine how far the index is expected to swing over that time.

Stock-market volatility tends to spike, then dissipate quickly. According to a 2011 analysis by widely cited volatility expert and University of Rochester economist William Schwert, volatility spikes often precedes rising unemployment, but the relationship doesn't hold for all times and places. Schwert's analysis was published in the journal European Financial Management.

A separate measure, called the Economic Policy Uncertainty Index, analyzes media coverage to estimate policy uncertainty in the United States. That index just hit its highest level since Brexit in the summer of 2016. The academics who created that measure have found that when it rises, GDP and job growth tend to slow.

One note of caution: Investors shouldn't fear short-term volatility for its own sake - especially if they're the patient, buy-and-hold types who tend to prosper in the long run. It may make it more interesting - and risky - for hyperactive investors, but the perils of day trading are widely understood.

It may, however, pose systemwide risks we don't completely understand. Much of the today's financial system was built in the recent era of relatively stable markets, according to The Economist. We don't quite know how Wall Street's squirming heap of algorithms will behave when things get erratic.

For example, some bots may be set to pile into the stock market when it looks like a safe bet and volatility is low. But then the inverse would also be true - they'd abandon the market en masse when volatility and risk rise. This could, of course, totally tank stock prices.