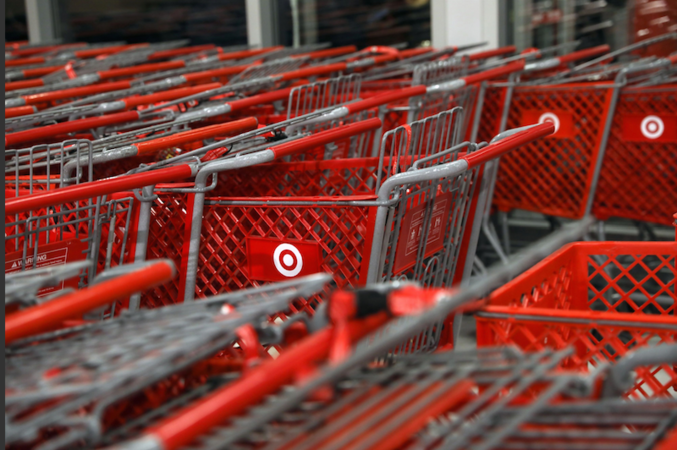 Empty shopping carts at a Target store in the Queens borough of New York on Nov. 28, 2019. MUST CREDIT: Bloomberg photo by Bess Adler.

Target Corp. wants a bigger cut of the nation's grocery budget. To get, it the retailer is adding Boar's Head meats and cheeses to its aisles.

Target is bringing between 50 and 200 items from Brooklyn-born Boar's Head to as many as 200 of its stores this year, ranging from maple-glazed turkey breast to sweet-chili garlic hummus and provolone cheese slices. The products, which include grab-and-go sandwiches and salads, have been available in a half-dozen stores in New York for the past few months.

The launch -- years in the making -- represents the latest attempt by Target to forge deeper ties with well-known consumer brands, following its moves last year to expand its selection of jeans from Levi Strauss & Co. and open mini-stores tied to Walt Disney Co. merchandise. It's also the next step in Target's push to bulk up its grocery business, which accounts for 20% of its revenue but has never been a signature category for the cheap-chic discounter like apparel or home decor.

"They're an incredible brand with a long history," said Stephanie Lundquist, Target's executive vice president and president of food and beverage. "We've been in conversations with them for some time."

Established in 1905 by Frank Brunckhorst and now based in Sarasota, Florida, Boar's Head has long been a staple of New York City's delis and grocery stores and is now found in supermarkets coast to coast. Target, though, represents its first big-box retail partner. And while Boar's Head is known for its pre-sliced meats, prepared sandwiches, wraps and salads will account for half of the offerings at Target.

That's smart, as sales of refrigerated lunchmeats in the U.S. are flat, according to data trackers Nielsen Co. and Packaged Facts. Consumers perceive those meats as overly processed and less healthy, Packaged Facts analyst Jennifer Mapes-Christ said. Boar's Head products, she said, are viewed as better for you, particularly its Simplicity line -- launched in 2016 -- which contains no antibiotics, nitrates or preservatives.

The partnership doesn't include any exclusive products, and it's not yet known if the brand will expand into all of Target's 1,800 U.S. locations, which include more than 100 smaller stores in urban areas and college campuses with a bigger range of grab-and-go items. Target's comparable sales of food and beverages have increased for nine straight quarters, and its new Good & Gather private grocery brand will expand from 600 to 2,000 items this year.

Lundquist, who ran Target's human-resources division before taking the reins of the grocery group last year, will likely share more details of her plans at the company's investor day on Tuesday.